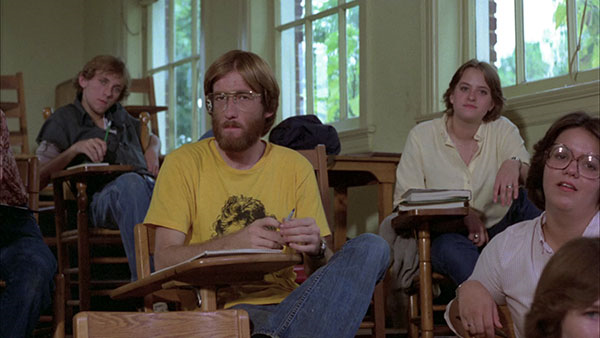 by Bryant Frazer Beware the toothless horror film--it's no fun being gummed to death. That's how you feel, more or less, by the climax of Final Exam, a low-budget Halloween knock-off crossed with a dopey frat-boy comedy. Written and directed by Jimmy Huston, who had made a series of southern-fried features for the drive-in circuit with North Carolina-based actor-producer Earl Owensby, Final Exam is a vintage programmer about a handful of students on a mostly-deserted college campus and a serial killer slicing his way through them, essentially at random.

As an example of the American slasher circa 1981, it's at least an interesting specimen. Huston assembles a small cast of characters encompassing a trio of female students--two of them sexually active, one not--and four boys, including a pair of fraternity brothers, a hapless pledge, and a spectacled, studious nerd with a morbid streak. (The latter, with telescope, TRS-80 Model I, and Toolbox Murders one-sheet festooning his dorm room, may be a forbear of the know-it-all Jamie Kennedy character from the Scream movies.) The performances aren't bad. The worst I can say about them is that the line-readings generally remind of voice acting in video games, and sometimes they're quite a bit better than that. For the most part, Final Exam behaves as you'd expect. There's a heaping helping of exposition that serves mainly to fill screentime before, yes, the characters are killed one by one. And, yes, the lone chaste co-ed (Cecile Bagdadi) becomes the requisite Final Girl, mounting a last-ditch resistance in the face of evil as she realizes that all of her friends are dead.

Some reviewers celebrate Final Exam for its eccentricities, and I can see where they're coming from. The killer himself is an utterly anonymous, heavyset dude in a pageboy haircut who gets no dialogue, character development, or motivation; for all his distinguishing characteristics, Final Exam could be the origin story of Anton Chigurh. I get the impulse (in general, backstory is the pits), although I don't think the gambit really works in a film that could have used more rather than less imagination. Others, I think, enjoy the movie as a nostalgia trip. It certainly calls back to a time when the notion of random violence in public spaces--especially school shootings--was perceived as more of a theoretical, here-comes-the-boogeyman kind of threat. Early on, a chemistry prof warns students that his TAs are "frustrated Nazis" and makes a joke about Charles Whitman, the Texas Tower Sniper who killed 16 students at UT Austin in a shooting spree that held the record until the Virginia Tech massacre in 2007. Aforementioned nerd Radish (Joel Rice) describes Whitman as "one of my favourites" with a grin that might mark him as a sociopath in a more recent film, but passes for harmless quirk in the bygone era of Final Exam. Then there's the jaw-dropping occurrence at the 17-minute mark, when ski-masked terrorists hit the quad and spray machine-gun bullets as students drop like flies to the lawn. The whole thing turns out, absurdly, to be a fraternity prank, but the effect is surreal--especially from a contemporary perspective--and the picture never comes any closer to achieving actual spookiness.

For the most part, Final Exam is a dull but occasionally genuinely endearing piece of unpretentious genre hackwork. I'm fond of a funny, understated scene in which the killer is locked in, and unceremoniously escapes from, a walk-in freezer, and there's a very nice moment at the climax involving a hunter's bow-and-arrow that would work equally well in a Shaw Brothers martial-arts movie. More evocative is the bit where Ralph Brown's jockish Wildman (pronounced "wild man") is being stalked in a cavernous, darkened gymnasium, into which he dumbly shouts, "Who's there?" and, "Stop screwin' around!" For a moment, with the lights off, the real gym falls away and the scene seems to play out on a vaster, blank canvas, emphasizing the muscle man's helplessness. Alas, that's as impressive as Huston's direction gets. Huston had been a film teacher at the University of Texas, and I'm sure his heart was in the right place, but he had no apparent talent for horror. Fans will single out Huston's decision to make a slasher movie with little in the way of explicit gore effects as laudable, but my feeling is that's nostalgia talking again. Where Halloween is scary, Friday the 13th is gory, and The Toolbox Murders is sleazy, Final Exam isn't anything, really--just low-budget slasher schlock. 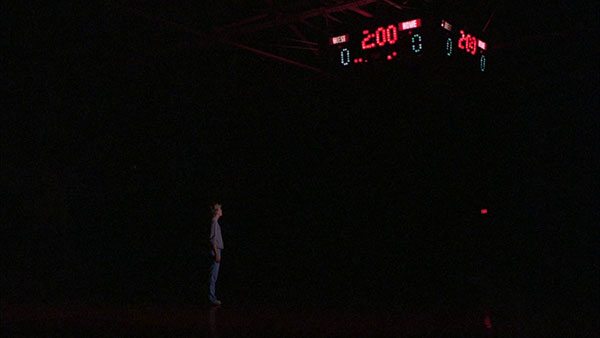 THE BLU-RAY DISC
The new 1.78:1, 1080p Blu-ray transfer of Final Exam from Scream Factory is sourced from Code Red's scan of the original camera negative. That sounds about right. The picture is remarkably clean, with only a few white speckles owing to negative dust and dirt--except in the opening titles, which are softer and rougher due to the necessary use of intermediate materials. Colour is nicely saturated and looks pretty well-balanced, while fine 35mm film grain is visible at tasteful levels, especially in low-light scenes. What rankles are the several digital flaws in the image that distract from critical viewing. At 11 minutes and 46 seconds in, for example, two frames have not been deinterlaced, which reads as a subtle stutter at normal speed. At 57 minutes and 53 seconds, another three interlaced frames cause a similar stutter in a pan across the gymnasium's bleachers, followed a split-second later by a quick double-pop on the soundtrack. These and other imperfections are minor oversights, sure, but they add up to a glitchy disc. (My guess is this is an old HD transfer, created in 1080i for broadcast sales and upconverted to 1080p for Blu.) Though casual viewers won't notice, videophiles may be bothered. The monaural audio (presented in the lossless 2.0 DTS-HD MA format) is adequate, especially considering the vintage of the original tracks. I noted some harsh sibilance as well as a few lines of dialogue that sound muffled or recessed in the mix, along with varying levels of audible hiss. Probably issues with the source material.

Extras, all imported from the 2008 Code Red DVD release, begin with a lively running audio commentary featuring actors Rice, Cecile Bagdadi ("Courtney"), and Sherry Willis-Burch ("Janet"), moderated by Julia Marchese from the New Beverly Cinema in Los Angeles and musician Deron Miller of the band CKY (who just happens to be married to Sleepaway Camp star Felissa Rose). As you'd expect, the track is heavy on anecdata from the set and light on much insight into the film's making, but the participants mount a reasonably good case for Final Exam, pointing out its grace notes. Marchese does identify some lazy plotting in the guise of advancing a pet theory about identical-twin killers on the loose.

The same three actors are present in individual standard-definition talking-heads running just over 15 minutes total. Rice has a good story about the audition process, which took place while he was slated to drive cross-country from California to Connecticut, necessitating that he fly back to L.A. from the road for callbacks. Willis-Burch briefly discusses her role in another slasher movie, 1986's Killer Party, as well as her more recent involvement with local theatre and current career as a schoolteacher. Cecile Bagdadi recalls the challenges of being a first-time actor and describes Jimmy Huston as "a blast" who would occasionally let her rewrite her lines. Speaking of Huston, the film's writer-director is the elephant in the room here. It's hard to tell why he didn't participate, but in his absence, the assembled interviews are a less-than-satisfying look back at the production. The theatrical trailer is here, too--a highlight reel in all its redband glory, replete with shots of stabbing, screaming, and stripping. It's in rough shape (and in standard-def to boot), but it's a fun artifact. 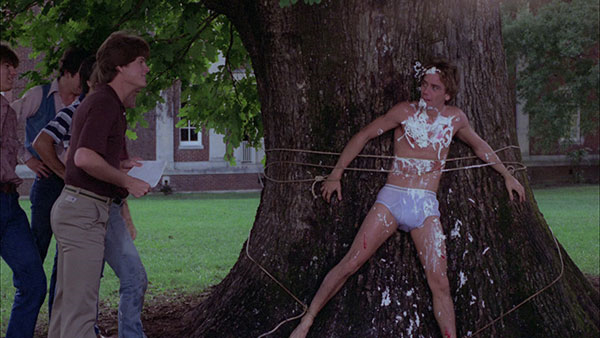