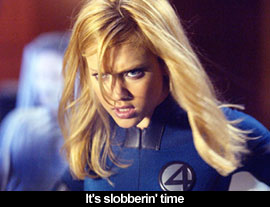 by Walter Chaw Terrible. Tim Story's Fantastic Four is just terrible. It's not overly offensive, not sociologically damaging, and the only way it'll pervert your children is by making them stupider. But if you love and respect the cinema as a medium capable of giving life to fantasy and passion to the impossible, the picture's crimes are no less egregious. Fantastic Four is a prime example in every respect of how not to make a movie: it's badly cast, poorly written, clumsily-directed, respects no internal logic, and looks extremely ugly to boot--it resembles those '80s production-line comedies (Police Academy, Hot Dog: The Movie) populated by fashion-plate superheroes instead of fashion-plate stoners. The pacing is so mortally off that it feels like days have been slipped in there in place of minutes, and there's so little rapport among the cast that it often appears as though the actors were filmed separately and later composited in some dork's basement mainframe. You can feel your life being siphoned away by this thing. Did I fail to mention that the special effects are bad? It's a lot of things simultaneously: a nightmare; a joke; a disaster. I dropped my notebook at one point during the screening and spent the rest of the time wondering if I should just leave it there as Fantastic Four finally dribbled to a close. It's bad enough to put you off movies for good.

Dr. Reed Richards (Marc Anthony look-alike Ioan Gruffudd) is a brilliant scientist--not too great with the ledger, but a brilliant scientist (we're told over and over in lieu of any actual evidence of intelligence) who, with his best friend (we're told over and over in lieu of any actual chemistry between the pair) Ben Grimm (Michael Chiklis), lobby rich neo-Trump Victor Von Doom (Julian McMahon) for the money to go into outer space for a better view of a cloud of DNA-altering radiation. Why they couldn't observe the damned thing from terra firma is a question quickly obscured by one of Fantastic Four's typically incompetent transitions from the pitch to the space station. The pilot of the ship is Johnny Storm (Chris Evans), brother of sexy scientist Sue Storm (the badly miscast Jessica Alba--smart now because she's wearing glasses (see also: Tara Reid in Alone in the Dark)), the ex-flame of Reed Richards and current flame of Von Doom.

Eventually, that to which they were trying to get really, really close completely unexpectedly engulfs the four plus Von Doom. Reed Richards becomes Mr. Fantastic, able to stretch his body like rubber and thus unlock doors from the inside; Sue Storm becomes The Invisible Girl, able to become invisible when she gets pissy and, apparently (though the film doesn't establish what's happening), project force fields when she's scared; Johnny Storm becomes The Human Torch, able to be on fire and fly sometimes; and Ben Grimm becomes a walking rock, losing him perhaps the most ungraciously-sketched wife in modern film. All the girls in Fantastic Four are bimbos and all the boys are morons, none of which cushions the moment where Story and company have the Human Torch cause a Burger King flame-grilled billboard to smoulder. Bungling attempts at a love triangle match bungling attempts at witty banter, while an early-picture action event finds hero Ben Grimm, now shockingly transformed by the transformative space rays into a big, yellow rock-monster, orchestrating a devastating and terrifying multi-vehicle crash on a bridge so that the newly-minted Fantastic Four can be introduced to the world as heroes.

Again, it's not irresponsible so much as it's just stupid. The whole second act is set inside a large laboratory where Richards races against the clock for a cure only to discover that the cure doesn't work (except that it does, and in the reverse, too--you figure it out), and then we're told that when our lovable quartet's DNA were altered, the DNA of their uniforms was altered, too, meaning that their clothing is able to perform the same feats of derring-do as these superheroes. Not knowing that fabric even had DNA, I was amazed to discover that the stupidest movie of the year actually taught me something. (I hope to one day have the power to clone my battered "Members Only" jacket using this fabulous technology.) Respecting the difficulty in bringing any motion picture from concept to fruition, let me give credit where credit is due: it takes a lot of hard work to make a film this badly, a special kind of dedication to excrete something as fantastically awful as Fantastic Four. It requires a mysterious alchemy of greed, time limitations, lack of training, too many spoons in the soup, producers shooting pick-up shots, editors doing Jell-o shots, lack of inspiration, and terminal lack of balls to coagulate a stew this turgid. A normal person simply doesn't decide in the middle of his superhero film to have one of the characters do a few dirt bike stunts and snowboard with his underwear model nurse--it takes a decidedly un-normal person, or committee of un-normal persons, to decide something like that. How fascinating that a film about super-humans was made by a collection of sub-humans; what a topsy-turvy world in which we live. Originally published: July 8, 2005.