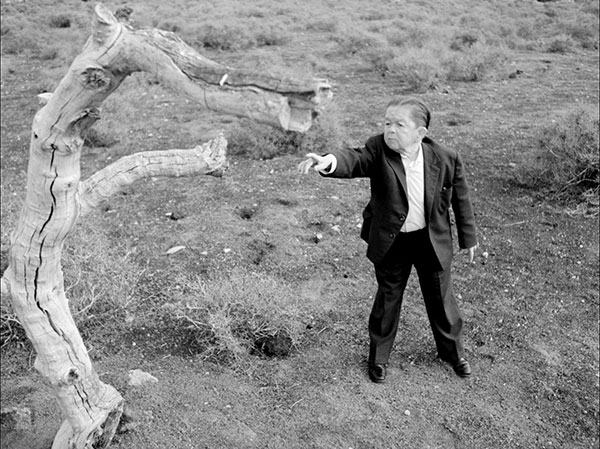 by Walter Chaw Even Dwarfs Started Small opens with a disquieting montage featuring a young girl rending live birds with her teeth that also culminates in the image of a chicken eating another chicken (shades of Magritte's 1927 painting "Pleasure"). Both actions speak to a sort of insensate savagery, the divorce between the Freudian Id and Ego so favoured by the surrealists--and in setting the film in a fictitious place populated entirely by the little people of the title, it touches on the surrealist belief that non-Western civilizations were closer to an undifferentiated nature. The story proper concerns the uprising of a "Prisoner"-like colony against an ineffectual, Kafkaesque godhead (Pepi Hermine) and the Institution he represents. Rebelling against the imprisonment of leader Pepe (Gerd Gickel, tied to a chair throughout), the rebels devolve from a semi-organized protest into bedlam, crucifying monkeys, organizing cockfights, and, in one of the most hopeless conclusions in film, watching as rebel leader Hombre (Helmut Döring) laughs until he chokes at the sight of a defecating camel.

The message seems to be not one of anti-revolution, but rather one of man's eternal struggle to live up to his better nature: how something vital is always lost in interpretation to the baser instincts of lust and violence. I'm reminded of the beggar's banquet sequence in Buñuel's Viridiana and, moreover, of George Orwell's Animal Farm; far from exploitation, the all-dwarf casting is essential to the poignancy of the piece, functioning as a way to at once distance the viewer literally and draw the viewer in metaphorically. (It's a conceit underscored by the contents of a cigar box mid-film: insects on pins dressed as a wedding party.) In certain respects, Even Dwarfs Started Small is as unapologetic and affirming as Tod Browning's Freaks, and, by similarly assuming the point-of-view of the "freaks," the picture turns the rest of society into the outcasts and monsters. As Herzog progresses as an artist, we'll find the idea of an individual forced by circumstance and nature to lay bare the contents of his lizard brain amidst ritual and ruins surfacing again and again, but even at the height of his artistry, there are few films in the director's portfolio as beautifully shot, scored, and composed as this one.

THE DVD
Anchor Bay does Even Dwarfs Started Small proud with a beautiful full-frame, pillarboxed transfer that preserves the film's original aspect ratio. The source print is free of defect almost all the way through--which, considering the title's age and budget, is a minor miracle. Meanwhile, the DD 2.0 mono audio reproduces Herzog's revolutionary, integral sound design with nary a pop or a crackle. A feature-length commentary teaming Herzog, Anchor Bay's Norman Hill, and actor Crispin Glover (!) was first recorded for the 1999 release and sports a lot of the same revelations later set down by Paul Cronin in his indispensable Herzog on Herzog. I did like, however, Glover and Hill acting as interviewers, and in particular I enjoyed Herzog saying that he was unnerved by the chickens because they were "profoundly stupid." Glover also writes liner notes for the keepcase insert. Originally published: April 6, 2005.

THE BLU-RAY DISC
by Bill Chambers Shout! Factory's Blu-ray package "Werner Herzog: The Collection" got off on the wrong foot with Nosferatu the Vampyre--the only disc in this set thus far scheduled for individual release--but quickly rights itself with its chronological first title, Even Dwarfs Started Small. The 1.33:1, 1080p transfer is rich in grain but impeccably clean, and Thomas Mauch's b&w cinematography has never better communicated Werner Herzog's desired starkness, which he alludes to time and again on the returning audio commentary with Norman Hill and Crispin Glover. I suspect contrast was boosted just a bit since the dynamic range is blunt at both extremes of the spectrum, but it doesn't detract. The brief yet dramatic spikes in grain--which are mostly confined to the scenes of Pepe and the instructor--I can only attribute to this being the kind of production sometimes forced to shoot on ends. Print damage is limited to the occasional light scratch or pinhole artifact. The attendant German-language soundtrack, presented in 2-channel DTS-HD Master Audio, is surprisingly rich where the music is concerned; though other critics have complained of a feedback hum, I confess I scarcely noticed it amid a tinnitus flare-up. 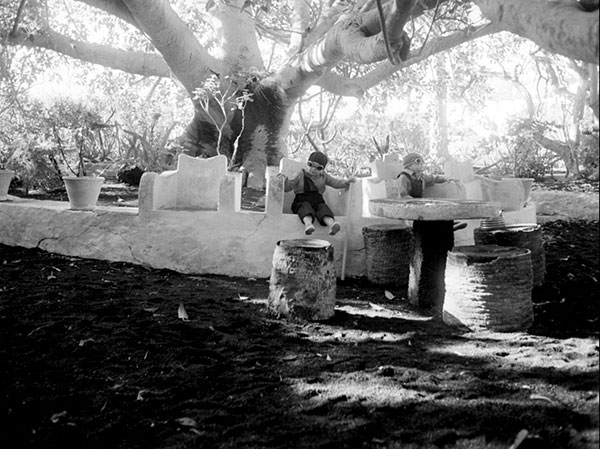