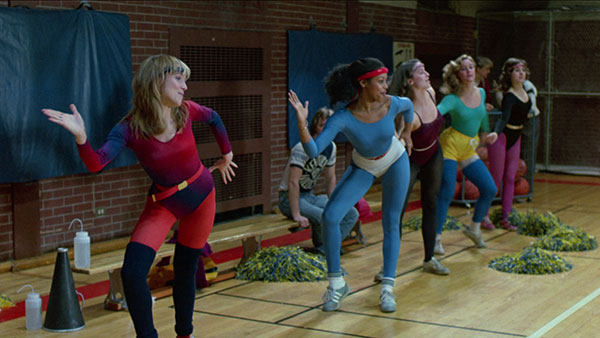 Night Eyes
**/**** Image B+ Sound B- Extras B+
starring Sam Groom, Sara Botsford, Lisa Langlois, Scatman Crothers
screenplay by Charles Eglee, based on a screenplay by Lonon Smith and the novel The Rats by James Herbert
directed by Robert Clouse

by Bryant Frazer There's really only one thing you need to know about Deadly Eyes, and I'm going to tell you right here in the lede. Deadly Eyes is a film in which hordes of giant killer rats terrorizing downtown Toronto are played by dachshunds wearing rat costumes. That's it. A monster movie is only as good as its monster, and this monster is wiener dogs in drag. If you don't find that off-putting--perhaps you raised your eyebrows, gasped in delight, and leaned in a little closer to your computer screen upon reading those words--then it's quite possible Deadly Eyes is the terrible horror movie you've been waiting for.

Make no mistake, it's a pretty bad movie, but at least it's a lively one. The rat attacks come early and often, with an unfortunate feline victim going down less than seven minutes into the picture. In the second reel, a babysitter leaves an infant perched in a high chair (too close to the cellar door) for two lousy minutes, and when she returns to the kitchen, well, it's already too late for Baby Snooks. Unlike so many low-budget horror efforts, this one does not skimp on the bloodletting, building to an unlikely showdown in the underground tunnels where an entire subway train loaded with politicians, bureaucrats, and glommers-on is threatened by the burgeoning mobs of ferocious, steroid-pumped rat-monsters.

The pace slows down a bit as the film introduces an array of characters, including a couple of municipal health inspectors (Canadian TV actress Sara Botsford, aided by the one and only Scatman Crothers), a professorial rat expert (Cec Linder of Goldfinger and the British TV series "Quatermass and the Pit"), a basketball coach (journeyman TV actor Paul Harris), and, rather awkwardly, a group of high-school students led by former Miss Teen Canada competitor Lisa Langlois (previously seen in Happy Birthday to Me and Class of 1984) and one-time Genie Award nominee Lesleh Donaldson (Funeral Home, Happy Birthday to Me). These fresh young faces are seemingly sprinkled into the story as a nod to the demographics of successful early-1980s horror flicks, leaving Harris to awkwardly straddle the grown-up and teenaged worlds as a teacher so dreamy that Langlois's Trudy dumps her boyfriend and throws herself at him instead. Because he's already romancing the health inspector, this leads to the picture's key character conflict: Can he fend off the jailbait while successfully wooing a more age-appropriate love interest?

Director Robert Clouse handles all of this reasonably well, given what's obviously a shoestring budget. The performances have a first-take quality to them, yet they're not amateurish, and everyone with the exception of Botsford's bureaucratic bosses comes across as genuinely likeable. Harris, especially, gets some nice character moments for his guileless single dad (although he probably spends too much screentime with a deer-in-the-headlights look in his eyes), and I appreciated the way Botsford's character is positioned early on as a bit of a bad-ass in a civil-servant kind of way, as disinterested in bribes as she is dissuaded by legal threats. But when it comes to toothy rodent action, Clouse is hamstrung by a general lack of production values, staging multiple deaths that cut perfunctorily between a gang of awkwardly-waddling dachshunds, a terrified victim, and the unconvincing killer-rat puppets that stand in for the pooches in close-up. Willing suspension of disbelief is a must.

The early action is so perfunctory you'd never suspect that Clouse was the guy who directed Enter the Dragon (yeah, that Enter the Dragon) until a repertory screening of Bruce Lee's Game of Death (another Clouse credit) erupts in chaos as rats swarm down the aisles and in between the seats, biting and gnashing indiscriminately. The sense of panic Clouse generates in a sustained sequence of running, screaming, and breaking glass as fleeing patrons are tackled by big, beefy rats is impressive, even if it's strangely unconnected to anything else going on in the narrative. That scene also showcases a surprisingly decent soundtrack featuring varied screeches and growls credited to Peter Jermyn (who had worked as a sound editor on Scanners) and a noisy orchestral score by Anthony Guefen. (Interestingly enough, given the lively soundmix and solid performances, Clouse was completely deaf.) The cinematography by René Verzier, probably best-known for Rabid, isn't too shabby, either: The camera often comes off its tripod, a probable nod to early Steadicam work in genre films like Halloween and The Shining that gives some scenes an energy boost. And while the lighting set-ups tend towards the spartan, they get the job done.

Though Deadly Eyes may have plenty of shortcomings, you can't accuse it of being lazy. Nebbish-turned-pistolero popping caps in overgrown vermin in the metro tunnels beneath Toronto? Check. Deranged teenaged sexpot trying to seduce a middle-aged schoolteacher? Check. Scatman Crothers, cashing in on the horror cred conferred by The Shining, describing "a rat this big"? Check. It's cheap, sure, but there's a spark to it. And that's Deadly Eyes. It may never be completely sure of what it's doing, or why, and it can't necessarily see where it's going as it dodders blindly through its paces, but it's working very hard to make you happy--just like all those brave little dachshunds who sacrificed so much for so little. 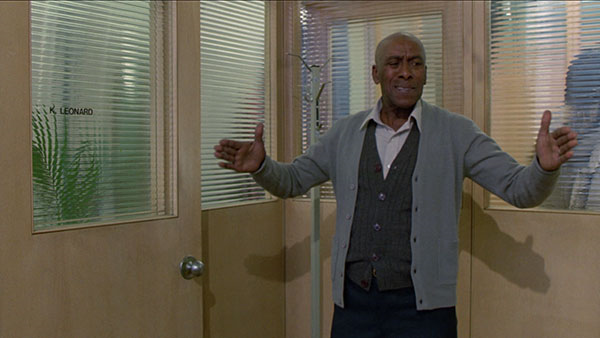 THE BLU-RAY DISC
Scream Factory continues to stroke and nourish the niche market for '80s genre obscurities with this relatively lavish Blu-ray-and-DVD combo package. Deadly Eyes itself would have fit easily on a single-layer BD, but it gets room to breathe on a double-layer disc that boasts well over an hour of HiDef supplementary material, and I detected no compression artifacts to speak of. The 1.78:1, 1080p transfer is not especially sharp or contrasty, which feels right for the vintage, and skin tones are good, if verging on pink in some shots. Blacks are mostly solid but not crushed, though there's a bit of flicker in places, while soft 35mm film grain gives the picture a velvety background texture. Although the image is exceptionally clean of dust and dirt, vertical scratches make a brief appearance in a few segments, plus there's a bit of gate-weave throughout. It's a solid presentation, about as good as you could expect for this film--which, on screen, actually bears the alternate title Night Eyes. My bigger cavil is about the English subtitles, as they would have benefited greatly from a proofreader.

The monaural audio, delivered in DTS-HD MA 2.0, is typically quite good, however some sections seem to have required more work than others. As a specific example, there's a conversation on a bus where the lines take on a grungy quality. Assuming there was no distortion in the original dialogue recordings, it sounds like an effort was made to bring down the noise floor in that scene without making voices sound unnatural, yielding a sort of midrange static that pulses with each syllable of the conversation. Elsewhere, the quality of the sound is fine, and there can be a lot of punch to the dialogue, with an unusually wide variation in dynamics between whispers and shouts.

Extras are limited to the talking-head interviews that have become Scream Factory trademarks, but they're good talking-head interviews. The key feature is "Deadly Eyes: Dogs in Rats Clothing", a 24-minute overview featuring comments by writer/co-producer Charles Eglee, who subsequently worked on TV shows such as "Moonlighting", "NYPD Blue", "Dexter", "The Walking Dead", and, currently, "Hemlock Grove". (Sample quote: "Deadly Eyes is a silly movie.") While the film is putatively based on James Herbert's novel The Rats, Eglee says he swiped the story's structure from Piranha, a movie he worked on as assistant director. I'm only surprised that he felt the need to be specific about that, given that Piranha itself was such a bald-faced swipe from Jaws. Also present here is art director Ninkey Dalton, who met Eglee on the production and married him. ("[I'd] never had a relationship with somebody on a film before," she says. "You just don't do it.") Meanwhile, special-effects assistant Alec Gillis reminisces about the early days of creature-effects firm Makeup Effects Labs, including the terrifying moment when he considered putting a whippet in a chestburster costume for David Fincher on Alien3.

Next up on this magical mystery tour of Deadly Eyes is Lisa Langlois, who speaks for 19 minutes on her industry experience, placing emphasis on her relationship with co-star Lesleh Donaldson. She tells decent stories about Tony Curtis, John Huston, that role she almost got in that movie by a Canadian director named James Cameron ("a sweet, sensitive guy" and maker of chick flicks, she says), and her argument with Julie Corman, who tried to talk her into taking the tape off her nipples for her 1988 flesh-eating cockroach feature, The Nest. Donaldson gets about 14 minutes to reflect on her own career in a similarly wide-ranging interview that travels far afield of Deadly Eyes, which she describes as "a car crash of a movie." Notably, Donaldson claimed in a 2011 interview that one of the dogs dressed as a rat in Deadly Eyes died on set of a heart attack or suffocation, an allegation that casts a shadow across the otherwise charmingly goofy endeavour. She doesn't repeat that claim in the interview on Shout Factory's new Blu-ray Disc, although she seems to have been given the opportunity. Special effects artist Allan Apone receives his own 14-minute segment, in which he credits Benji director Joe Camp, the film's head animal trainer, with the idea of casting dogs as rats, and categorically denies that any of the daschunds used on the film died during the production.

Finishing out the video interviews is Joseph Kelly, who plays the boyfriend Langlois's character treats so poorly. In a rambling 13 minutes, he remembers the first time he saw the finished film--on HBO during a visit to New York--and jokes about buying the Blu-ray to show it to his 16-year-old daughter, then finishes with a pitch for his short film Summer Eleven, available for purchase on YouTube. Surprisingly, Scream Factory did not dig up a theatrical trailer for Deadly Eyes, settling instead for a 30-second TV spot sourced from VHS. Robert Clouse died in 1997, so he was unavailable for comment, but it still would have been nice to get more context about the genesis of the movie, thought to be (per WIKIPEDIA) the only horror film ever to come out of Hong Kong's famed prodco Golden Harvest. That said, Scream Factory is simply knowing their audience by tracking down Langlois and Donaldson, and the added contributions by Eglee, Gillis, and Dalton are pretty nifty. It may not be comprehensive, but it's hard to imagine a more careful or definitive release of Deadly Eyes. 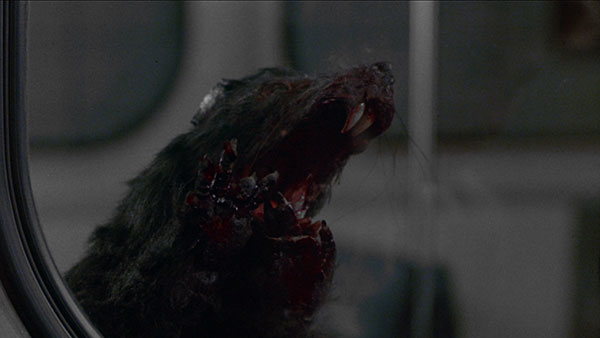