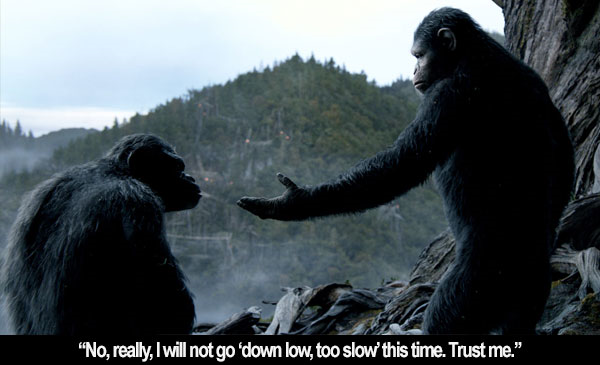 by Walter Chaw Matt Reeves's remarkable Dawn of the Planet of the Apes (hereafter Dawn) isn't the best sequel since The Empire Strikes Back, but it is the best sequel since The Dark Knight. It's uncomplicated but beautifully executed--so pure and genuinely-felt that its conclusions about the unavoidable zero-sum game of tribalism land as not didactic but poetic. That certain sense of Tennyson bleeds into the overgrown post-apocalyptic landscape, all torpid acedia in its human ruins and in a tree-bound ape village that represents a sort of circular hopelessness. We recognize it as the beginning of a successor civilization that is unfortunately exactly like the beginnings of the civilization on which it's being built. Dawn's best trick is in balancing our sympathies in this way. We cast our lot with heroic Caesar (Andy Serkis, in a motion-capture performance that is one of the great silent-movie turns, ever), who's pushing against a Cheney-manqué in Koba (Toby Kebbell). Caesar gratifies our instinct for the underdog: it's easier to identify with Adam than with Nero. And then Reeves shifts to a human refuge and populates it with people, specifically Malcolm (Jason Clarke) and Ellie (Keri Russell), working on a peaceful solution against the more bellicose and paranoid of their number (Kirk Acevedo and Gary Oldman). No fair guessing which philosophy wins out--it's the only one that ever seems to.

There's a lot to discuss with a story as direct and familiar as Dawn's. It's a parable for whatever parts of that identification remain non-pejorative--one done elegantly in a series of ideas and images. It has a father-son intrigue, then adds a parallel one. It has a mentor relationship it's interested in, and then it gives the mentor another student in a scene that should be saccharine, but isn't. It plays with race in a conversation about being freed from chains, only to escalate that conversation into a larger dialogue concerning collective guilt and maybe original sin. The picture speaks of trust and friendship, family and hearth, betrayal and the unbridgeable gaps between cultures that use ignorance and semantics to dehumanize the Other. Michael Bay's films do this by objectifying minorities and women and treating their lives and sexuality as the province of the white male; Dawn does it by offering the standard line about "sameness" to an ape General. One proves it; the other mourns the first's inevitability. It's shot through with the same queasiness as the original Charlton Heston Planet of the Apes--the same sense of awful recognition that's there even before the famous final reveal. Dawn makes explicit that whether or not you believe we're primates, you must acknowledge that we're no better than primates. In a loaded moment, Caesar declares one of his own "not ape"--in that, hear all the protests of Muslim memorials, refusals to allow child-refugees safe harbour in our cities, intolerance towards and persecution of gays. If these other things are "not human," game on.

Dawn, then, is an empathy test. It has something to say about the Second Amendment and the inherent danger of firearms. Just as rape is on some level about sex, guns do in fact kill people; any argument otherwise is dangerous, idiotic, and retards any kind of meaningful resolution. It has something to say about labels and the massive lack of curiosity that allows labels to become bumper-sticker dogma once the world-clearing contagion introduced in the first film and dubbed "Simian Flu" becomes rationale for the extermination of all simians. Never mind that we're simians. Never mind that there weren't WMDs in the desert, or Iraqis on the planes. It has something to say about what happens when the oppressed become the oppressors, and how quickly one becomes indistinguishable from the other. It has something to say about how mercy has a quality that is not strained, yet acknowledges that this is a useless platitude in the face of the hardwiring that makes us scared, violent, and hateful. Dawn is every bit the movie we deserve, and its brilliance is tied to at least a pair of exceptional action sequences: one a large-scale gun-battle, the other a fight started over a question of "weakness" that takes place atop a toppling tower that--and this is vital--is toppling for a reason. I love it when a woman expounds on what she's lost, simply, and ends by saying, "But now I have you and your father." More than that, I love when someone is confronted with insane stupidity, and says nothing at all. There are real consequences to every act of violence in this film, so that its moments of clarity come with a sense of grief and weight. It's an antidote to our poisonous climate, a moral curative.

Watch for the picture's use of spirals and geometry, as cogent and loaded as Kansas vs. Oz in The Wizard of Oz. Watch for the long shots that establish sense of space in this world, along with God's-eye shots that allow us intellectual distance while hinting at the general inconsequence of this sad little play. Watch for an altitudinous moment during the opening credits where every light winks out, one by one, and apply it as the film's unifying principle and guiding theology. It's smart as hell in every aspect of its execution, and tight as a drum besides. I've long lauded Reeves's Cloverfield as one of our finest 9/11 parables. Here's the bookend to it six years later. Dawn's legacy will be how it shifts our allegiances throughout, how by the end it does the impossible by making us ambivalent towards every perspective. It forces a shade of grey on a hypothetical audience predominantly composed of people who abhor nuance; and it inches us just a bit closer to the understanding that it's the failure to wonder that is the source of all evil. Blame the people, in other words, who say that movies say nothing: that art is meaningless; that John Lennon was wrong to watch shadows on the wall. If there's something that links the best films I've seen this year, it's this desire to engage our failures as humans through alien perspectives. I don't think Dawn will change a goddamn thing, though I'm inspired by the attempt.