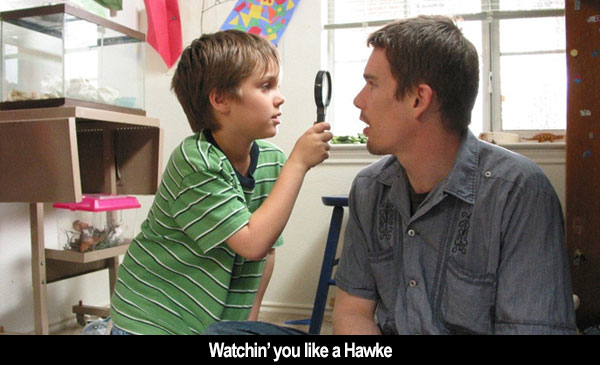 by Angelo Muredda "I was somebody's daughter, and then I was somebody's fucking mother," Patricia Arquette's Olivia complains early on in Richard Linklater's uncommonly rich, deceptively titled Boyhood. Though it's been rightly celebrated for its guerrilla shoots and nomadic production history--depicting an adolescent's maturation from six to eighteen by reassembling the cast once a year, more or less in secret, for a few days at a time--Boyhood might be most impressive as a reflection on the impossibility of fully capturing what happens in all those "and thens" that constitute a life. An impressionistic masterwork, Boyhood is arguably both Linklater's most ambitious project and his most easygoing, revelling in the amorphousness of his conceit as well as the freedom it allows him to putter around in the unformed material of his characters' still-unfolding lives.

Ellar Coltrane plays Mason Jr., first glimpsed (under the uncanny shadow of Coldplay's "Yellow") as a dreamy-eyed cherub staring up at the clouds from his makeshift bed of grass. That's an evocative image that promises a universal coming-of-age narrative via the privileged cipher of the white American boy-child, a selection Armond White predictably if not unfairly bristled at. To be sure, there's a wearying genericness to some of young Mason's experiences--his sideways glances at his mother's dating life, for instance, or his discoveries of the lingerie section of the Sears catalogue and the lifeless husk of a dead bird. One worries that for all of Linklater's gumption and the cast's commitment, this is a story we've seen.

Yet Boyhood soon forgoes this checklisting impulse in favour of something altogether more textured, not least thanks to Coltrane's developing sensitivity as a performer capable of commanding our attention in scenes that don't obviously scan as greatest hits from an American childhood. Another boon is that Mason Jr.'s adolescent growth spurts consistently happen two steps behind his older sister Samantha's--her largely-offscreen maturation between episodes granting a syncopated rhythm to their scenes together. Played by Lorelei Linklater, the filmmaker's own daughter, Samantha is a touchstone for not only Mason Jr. but also the film, starting off as broad comic relief in her Britney Spears phase (with shades of The Lego Movie's curious disdain for sisters) and becoming a more reactive presence, a tacit co-conspirator in Mason's peripatetic tour through Texas as Olivia hauls the family through grad school, teaching gigs, and a couple of ill-fated, abusive relationships.

As Mason and Samantha's separated parents, a pair of progressives in Rick Perry's Texas, Arquette and Ethan Hawke give Boyhood much of its emotional shading. Even more than in Before Sunset, where his wrinkled forehead initiated him into adulthood in his mid-30s, Hawke's increasingly rumpled good looks and manic energy grant him the kind of middle-aged authenticity that Tom Cruise would kill for. Thanks to its elastic device of using Mason Jr. as a pivot point for other people's dramas, Boyhood holds a lot of movies together in one, and the finest may be its portrait of Hawke's divorcee dad, who remarries and settles into a second, more conservative family life replete with firearms and God-fearing in-laws, minus any noticeable condescension on the part of the filmmaker. Still, it's Olivia whose peripheral development relative to Mason Jr. is ultimately the fullest, in part because it's she who is most aware of how even ostensibly full lives come with expiry dates that seem to reduce everything to bullet-point accomplishments. Her concern with the way life breaks down in the rearview as a series of milestones carries over from that early complaint to her final, aching monologue about expecting something "more." Linklater is brave to let that grievance hang in the air for a second before cutting to an overhead shot of her son's eager onward drive to college--the cruelty and romanticism of the moment for the parent and child, respectively, allowed to coexist, however anxiously.

A biographical showcase made out of warm vignettes that feel incidental in the moment and essential in hindsight, Boyhood is above all an experiment in locating points of synchronicity between life and storytelling, and not always a successful one. One wants to be generous to a film this earnest, viewing its initial flaws as adolescent misfires in keeping with the improvisatory spirit of the project. The first years are rocky, to that end, betraying a movie that hasn't quite figured out what it wants to be. Where Coltrane is allowed to cultivate a certain freewheeling non-charisma in his youth--quizzically taking in the weird mating habits of his elders, his brow ever so slightly furrowed--the younger Linklater's comedic stylings are showcased in a way that only a father could appreciate. Less explicable is the signposting soundtrack, which insistently tells us what year we're in and how everyone feels about it, as when the family's early move to Houston is underscored by Sheryl Crowe's assertion that every time she feels lame she's lookin' up.

Yet it seems churlish to complain about bum notes when Boyhood finds its groove so beautifully. There's simply nothing in contemporary American filmmaking like the set-piece where Mason Jr. and Samantha line up for the midnight release of Harry Potter and the Half-Blood Prince--a perfect confluence of pop culture and personal history. Nor is there a real precedent for the easy chemistry in Mason Sr.'s birds-and-bees lecture to a squirming, now-teenaged Samantha (covertly texting her way through Dad's advice) on a weekend visit with his kids. Simply put, they feel like a family. Like most of Boyhood's standout scenes, none of which are especially ostentatious (as is Linklater's wont), it could only be realized so convincingly several years into a good-faith experiment among equal creative collaborators.