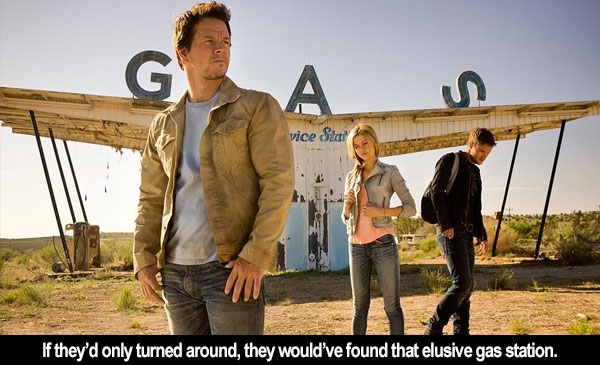 by Walter Chaw Early on in Transformers: Age of Extinction (hereafter Trans4), director Michael Bay seems to be equating the unjust hunt for our noble robot allies the Autobots with the Tea Party's persecution of immigrants, and then it goes to shit. It's a meaningless, impossible-to-follow trainwreck in the patented Michael Bay style that, also in the Michael Bay style, is deeply hateful of women and difference. What's new this time out is that the central object of violation for our lascivious appreciation is 17-year-old Tessa (19-year-old Nicola Peltz), who, upon introduction, is leered at by an assortment of older gentlemen before Bay whips out a (no-kidding) legal justification for our statutory interest. It reminds of the Tony Danza vehicle She's Out of Control not only in that its father figure, Cade YEAGER-because-it's-America-fuck-yeah (Mark Wahlberg), is over-interested in his daughter's budding sexuality, but also in that Trans4 is awful. Awful in its misogyny, sure, and awful because, in what has become a tradition in Bay's Transformers franchise, the only African-American character is comic relief...and a slave. Never mind. Oh, and it hates the infirm and misses no opportunity to mock their infirmity. Again, never mind.

Cade is a brilliant engineer, which is why they cast Mark Wahlberg. Cade also gets a moving dramatic speech delivered to a featureless chunk of metal and vice-versa. There's talk of souls and the fallibility of man. And there are robot dinosaurs all of a sudden, along with a fight in Beijing or Chicago, I'm not sure--maybe both, maybe neither. What I did glean from my IMAX 3D presentation of this hate crime is that the Steve Jobs guy (Stanley Tucci), who has a moment where he describes his ex-girlfriend as sexy but a bitch, appears to have three hookers on staff, making him look like he's in a perpetual Robert Palmer video. Trans4 is a 165-minute movie about explosions that have no source, fights that have no clear tactics or resolution, chases that have no spatial context, and women in short-shorts and pencil skirts and high heels that are practically stilts. It's the movie version of a stripper pole at a gun show, and its politics veer from hating the Other to Ludditism and an agenda of anti- technology and research. Scary? It's only the America that boasts public mass shootings so common they don't even make the news anymore.

That same helpless acceptance of atrocity is what allows something like Trans4 to run as long as The Godfather, not to mention be packed to the gills with ugly profanity, boast a body-count of hundreds of bystanders, and still garner a family-friendly PG-13 rating to help recoup its obscene production costs. There's extreme collusion in allowing something like this to happen, and just like the batch of male critics who failed to recognize the sexual violence metaphor in Maleficent, the real problem isn't with a sociopath like Michael Bay but rather with a pop-culture mechanism that looks the other way when our young men rush to worship at these shrines. Still, Bay is among the worst human beings on the planet, which made him the perfect man to lampoon his own excesses in the surprisingly trenchant Pain & Gain--but after Trans4, it's fair to wonder if he realized that Pain & Gain was a satire. At the end of the day, Trans4 is a deadening, physically unpleasant light show with no human reaction that makes any kind of sense; dialogue composed almost entirely of shouted invective or macho bonding encouragement; and so much evidence--as if more were needed--that Idiocracy was a documentary. More than bad, it's irresponsible and dangerous. All its high-tech/high-decibel gibberish is just the needle carrying the contagion.