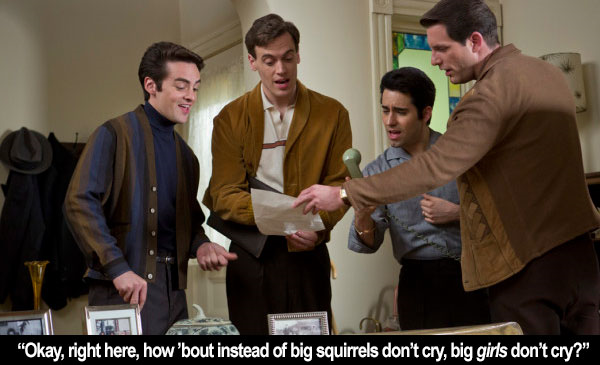 by Angelo Muredda Clint Eastwood has never been the most self-referential filmmaker, preferring shopworn competence to flashy displays of idiosyncrasy. But it's hard to imagine he's not at least slightly gaming his audience throughout Jersey Boys, an otherwise limp tour through the Four Seasons' early discography. What else are we to make of the gag where baby-faced songwriter Bob Gaudio (Chris Klein dead ringer Erich Bergen) catches an image of his director's grizzled mug in "Rawhide" on a hotel TV? While that feels like a pretty straightforward joke on Eastwood's uncanny endurance all the way from "Sherry" (1962) to Jersey Boys the Broadway musical (2005), it's a bit harder to read an equally surreal moment like the dispute between producer and sometime lyricist Bob Crewe (Mike Doyle) and wise-guy guitarist Tommy DeVito (Vincent Piazza) over the band's sound. "I'm hearing it in sky blue," Crewe whines in the middle of a recording session, "and you're giving me brown." On the one hand, it's not like Eastwood to take the piss out of his own work, but on the other, what better analogy for his adaptation process can there be than the conversion of a sky-blue all-American songbook to a shit-brown sung résumé, rendered all in blacks and greys save for the odd splash of salmon and the occasional scrap of tweed?

Deliberate or not, Crewe's pre-emptive review of Eastwood's own Jersey Boys cuts close to the bone. A somnolent, rudderless affair that drifts for the better part of an hour before anyone even mentions the act of recording a demo, Jersey Boys is less a true cinematic translation of Marshall Brickman and Rick Elice's faux-documentary musical than a referendum on whether anyone was hurting for an utterly standard Frankie Valli biopic. As on Broadway, where he won a Tony for his efforts, John Lloyd Young plays the pipsqueak Italian-American barber and eventual frontman with the piercing voice you'd more typically expect to hear from a backup singer. Young is a faithful musical doppelgänger, if not much of an actor, but his ability to more or less recreate Valli's nasally falsetto is a problem rather than a boon, given Eastwood's utter disinterest in elucidating the band's historical importance--as belated, white inheritors of doo-wop, or as a square alternative to more progressive R&B acts--outside of third-string characters' praise of their distinctive style. "Is that a different sound, or what?" a producer asks late in the film, apparently unconvinced himself. No wonder: if their sound is so singular, why is it so easy to port over into two completely different forms?

That uneasiness about what makes the Four Seasons biopic-worthy in the first place wouldn't be such a problem if either the source text or Eastwood's adaptation had much to say beyond empty platitudes about working-class authenticity and Jersey loyalty. The musical's Rashomon-lite structural conceit, adopted without any fuss as per Eastwood tradition, is that each band member takes a turn narrating the events of their spotty career from their origins in the projects to their induction into the Rock and Roll Hall of Fame in 1990. Flattened into Eastwood's usual minimalist-realist style and dispersed unevenly through a punishing 135-minute running time, these asides don't break the fourth-wall as much as they awkwardly talk in its general direction. It's not until the final scene, a magical-realist roundelay between the four narrators, spouting their hearts' truths in close up, with softly strobing stage lights behind them, that there's anything like poignancy to the framing narrative's attempt at a cumulative emotional effect--any effort to treat the band members as distinct men instead of one cipher with four different faces.

The only feeling Jersey Boys musters with any consistency before then, and before a high camp closing-credits reprise of "December, 1963 (Oh, What a Night)" that seems to belong to a different film, is contempt. Its scorn cuts two ways, first to the audiences who would dare go to a jukebox musical, albeit one directed by Eastwood, for music; it's not until the "Sherry"-"Big Girls Don't Cry"-"Walk Like a Man" triple threat sinks like a stone in a procession of listless medium-shot performances around the midpoint that we get a solid indication this is even a musical. No one fares worse than the secondary players in the band's orbit, from young, ratlike Joe Pesci (Joey Russo), depicted as being the bad kind of Italian (the casting is so poor Tommy has to level with us that this is the real Joe Pesci), to Crewe, whose queerness is joshed about (by the script as much as by the patently homophobic Tommy) with all the sensitivity of a boys' locker-room chat. The most dishonourable mention, though, must be reserved for the women, who have the misfortune of propping up the boy geniuses for all of five cumulative minutes. See: Mrs. Valli (Renée Marino), introduced as the arm candy of a slick-suited high-roller, promptly married off to Valli within two scenes, then forgotten until her (offscreen) transformation into a pill-popping shrew is complete in the last act. And what of Frankie's poor daughter Francine (Freya Tingley), introduced so late in the game as a troubled mirror image of her pop's ghetto-mired ambitions that she can only be around to die, that her father might live to sing another hit?

That these problems are baked into the text's structure is hardly reason enough to excuse a filmmaker who, as is his wont, just wants to hit the marks and go home. To that end, Jersey Boys is possibly the most listless entry yet in Eastwood's increasingly dashed-off filmography, a movie whose only aesthetic choice of consequence is to set the lights to dim. There are some who will no doubt grant this long, winding doodle clemency on the basis of its status as another pure expression of Eastwood's late style--akin to Gaudio squirting out "Sherry" on a bus in fifteen minutes after years of stasis. May they go with God.