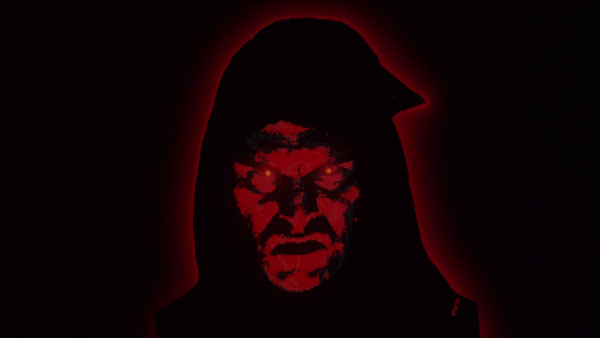 by Bryant Frazer Consider the pig. Pork is damned near a gourmet food these days. Celebrity chefs will serve you layers of pork belly wrapped around potatoes, figs, even pineapple. They'll dip bacon in chocolate, infuse it in vodka, or drape it across an ice-cream sundae, resplendent in its brown glory. Your local organic market probably sells artisanal bacon cured with dark, fine-grained muscovado imported from Mauritius and flavoured with angel farts and faerie dust. The recent cinema has also celebrated the pig, via two excellent Babe movies and a decent adaptation of Charlotte's Web. It wasn't always that way, though. No less an authority than God Himself went Old Testament on pork back in the day, and it took the famous and completely disingenuous "Pork: The Other White Meat" campaign to rehabilitate swine for the U.S. market. What I mean to say is that the 1982 horror movie Evilspeak, in which a trio of crazed, Satan-possessed porkers burst into a bathroom and disembowel a nude woman taking a shower, couldn't have done the humble pig's reputation any favours.

The story of a bullied computer nerd at a military academy who eventually goes Carrie White on his tormentors, Evilspeak plays like a schlock-horror response to Taps, which came out only a couple of months earlier. (Military school figured in the general zeitgeist of the era, maybe in part because of Pat Conroy's 1980 novel The Lords of Discipline.) A flashback opener involving an evil 16th-century monk named Esteban (Richard Moll) climaxes with a head-spinning match-cut to the then-present day, when young Stanley Coopersmith (Clint Howard) discovers a hidden chamber beneath West Andover Military Academy. He recovers the monk's olde journal and starts using an Apple II to decipher the Latin text (apparently the school was an early beta site for Google Translate). Discovering a recipe for a black mass that will bring the malevolent monk back to life, Coopersmith eagerly gets to work gathering the required ingredients. Meanwhile, the pigs--which are being raised on school property, for some unexplained reason--are becoming increasingly agitated. And the computer appears to be channelling Esteban himself, mimicking an old arcade video game's attract mode and demanding human blood.

Nothing about Evilspeak suggests that director Eric Weston has any great fondness for the horror genre. He seems most interested in a framing story that has boys being terrible boys, and the film's bully narrative is straightforward, even if Clint Howard's broad performance signals its fundamental irreverence. There's an odd intimacy to the thing, including the visibility of naked butts in the shower room, that does a good job of conveying a misfit's sense of living in close physical proximity to cheery assholes who get their jollies from tormenting people like him. Weston's direction is careful and competent, but it doesn't have much style to it. The screenplay works hard to make the villains truly loathsome, rather than garden-variety dickish (spoiler alert: it resorts to having them kill a puppy), though the results aren't exactly convincing, making the final revenge scenario less satisfying than it could be.

When Esteban is summoned and Coopersmith traps his enemies in the academy's chapel, through which he levitates, waving a broadsword, Evilspeak unleashes a cavalcade of craziness that, honestly, feels a little dull despite its vigour. One kid has his beating heart pulled out of his chest and I admired the execution of the effect even as I stifled a little yawn. (Maybe it packed more of a punch in those innocent years before the Mola Ram Incident.) The film's more distinguishing characteristic is its generally clueless yet still novel employment of computers and early-'80s video art in particular. In its procession of semi-abstract visuals that play like a nerd's-bedroom counterpart to the famous Stargate sequence from 2001: A Space Odyssey, Evilspeak offers a pre-8-bit vision of Apocalypse.

But the picture's best scene is its most gratuitous set-piece. A woman, an administrative assistant type named Miss Friedemeyer (Lynn Hancock), disrobes (as women in these movies do) for a shower scene. It's not one she will survive, as her home is invaded by angry pigs who find her in the bathroom and attack her under the soft spray. The scene has a charge to it for a couple of reasons--most obviously because it's just an outrageous excuse for tits and bloodshed near the film's halfway point. Yet it's also a mean sequence that puts a presumptuous woman in her place. Miss Friedemeyer first appears in school administrator Colonel Kincaid's (Charles Tyner) office, where Coopersmith's been summoned for a victim-blaming lecture. She's dressed in a midriff-baring top and a skirt slit up to here, and she flashes a nasty little smile, taking obvious pleasure in the poor kid's misery. Worse, she steals his book of Satanic rituals because she's fascinated, in all her blatant vacuity, by a bejewelled gewgaw embedded in the volume's front cover. And it's her efforts at peeling the gems off the book that apparently summon the angry pigs, who quite literally rip her guts out. I admire the scene despite its blatant misogyny--Miss Friedemeyer is introduced solely to 1) be a smug, covetous bitch, 2) display her body, and 3) die for our unwholesome pleasure. Horror movies are routinely accused (sometimes unfairly) of being sexist artifacts--but this really is a textbook example of the anti-woman horror scenario. Talk about bullying. Nevertheless, the inherent sadism gives the scenario an uneasy frisson. At least it has some brio. (Evil pigs!) In something as bland as Evilspeak, that goes a long way. 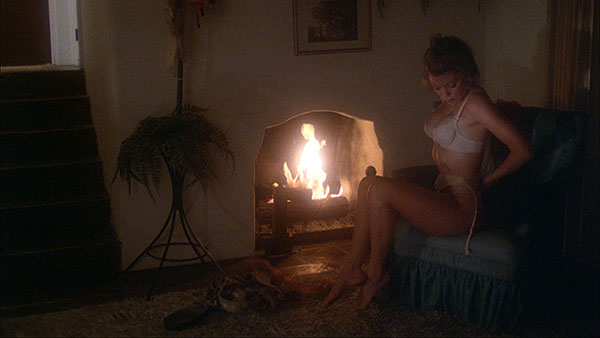 THE BLU-RAY DISC
Niche genre label Code Red rescued Evilspeak from the dustbin of early-1980s horror knock-offs with a high-definition remaster and DVD reissue last year that improved visually on earlier releases. Subsequently, Scream Factory cut a deal to bring Evilspeak to Blu-ray in a 1.78:1, 1080p transfer that pretty well recreates, and maybe improves upon, the theatregoing experience. The liner notes claim the source material is a "newly discovered" 35mm interpositive, though I'm told that black "cigarette burns" like the ones that appear here are usually applied only to internegatives that are used to strike theatrical prints. At any rate, plenty of both positive and negative dirt, dust, and other blemishes are visible in the frame, as well as the occasional flicker and vertical scratch, although not in quantities that detract in any meaningful way from the period-accurate presentation. (Certainly all of the analog artifacts are preferable to DVNR and edge sharpening, dubious tactics not in evidence here.) The picture is not exceptionally sharp, and darker shots can get murky, but the image reads as unmistakably film-like, with smooth contrast across the board, nice treatment of colour, and solid retention of detail in the shadows, where an organic layer of film grain often remains visible even when no other picture information is discernible. While it must have been tempting to cram the title onto a BD-25, Evilspeak was granted a BD-50 and a generous bitrate hovering in the mid-30 Mbps range. Watching it gives you a good idea of what the movie really looks like--including the all-too-visible cables supporting the levitating Howard in the finale--and that's the main thing I look for. Most importantly, the new source allegedly contains footage that was edited from the film by censors in the U.S. and the U.K.*

The audio track, offered in two-channel monaural DTS-HD MA, is clean but not unnaturally so, with a smidgen of hiss and crackle sometimes underlying the mix. I thought I detected a hint of distortion or clipping during the loudest bits of dialogue and SFX, but any such flaws are likely present in the original materials. Otherwise, it sounds fine for its vintage. When all hell breaks loose at Evilspeak's climax, there's an awful lot of audio action crammed into the track, and the somewhat brittle timbre of the sound comes to the fore in way I found unpleasant at higher volumes. However, different audio elements remain mostly discernible throughout the densest parts of the track, and distortion is minimal. Roger Kellaway's enjoyably derivative score, heavy on the shrieking choral voices that signalled Satanism back in the '70s, comes through loud and clear.

Extras are led by the accurately titled "Satan's Pigs & Severed Heads: Making Evilspeak" (28 mins., HD), one of Scream Factory's signature documentary shorts bringing together actors Claude Earl Jones, Haywood Nelson, Richard Moll, Loren Lester, and the film's nominal scream queen, Lynn Hancock, to reminisce and work out their first impressions of the script. The intense and charismatic Moll, who played Esteban, remembers the director making Clint Howard cry for one scene by berating him on set, and describes Evilspeak as "avant-garde" at one point, invoking the Grand Guignol tradition. Meanwhile, Hancock reveals that she thought "it would be really exciting to be killed be pigs" but remembers feeling intimidated by the required nudity. Her solution? Rhinestone panties. It's a long story.

Scream Factory didn't bother rounding up Clint Howard, Don Stark, and Joe Cortese, as all three actors get the floor in their own individual talking-head featurettes ranging between 7 and 12 minutes in length that have been imported in standard-def from Code Red's DVD. (The best line on the whole disc may be Howard's observation: "I ate so much pig shit on this picture I had my mouth full for days.") Similarly, a 2012 audio commentary featuring an unfocused conversation between director Eric Weston and Code Red's Bill Olsen is carried over from said DVD. Weston claims that Evilspeak was one of Church of Satan founder Anton LaVey's favourite movies. He also says he's looking at getting clearances for a sequel or a remake, so maybe consider this Blu-ray an opportunity to vote with your dollars.

Scream Factory did call in makeup artist Allan A. Apone, founder of Makeup & Effects Laboratories (MEL), who has built up a badass IMDb page over the years, working on everything from Faces of Death II, Galaxy of Terror, and The Sword and the Sorcerer to "Twin Peaks", Three Kings, and Marvel's The Avengers. (According to his bio, he's Samuel L. Jackson's personal makeup artist.) As an Evilspeak's MVP, he gets 15 minutes of screentime to talk shop, and he's a pretty engaging speaker on the subject of practical effects. It's kind of a shame there are no behind-the-scenes shots to back up his stories. Finally, there's a two-minute trailer containing snippets of violence and nudity drawn from throughout the movie's running time. It's actually in pretty good shape for this sort of thing and receives an HD transfer. As usual, Scream Factory has gone the extra mile and created reversible jacket art, which bears the U.S. theatrical key art on the front and alternate campaigns from Japan and Germany on the back. 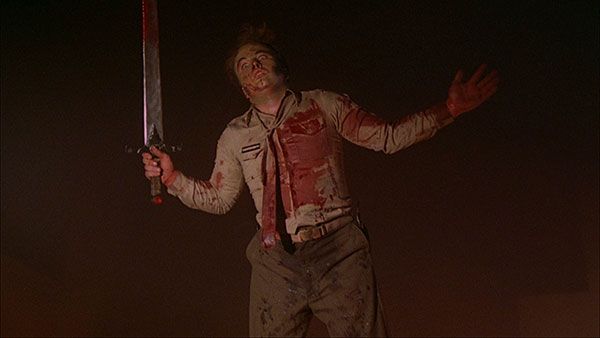 *I can't sort out the differences between all the various editions of Evilspeak, but the version on this disc has a running time of just over 92 minutes, not the 97 minutes promised on the sleeve. The BBFC first banned Evilspeak as a video nasty but claims to have approved, in 1987, a 96-minute video release of the film after nearly four minutes were cut, suggesting that a 100-minute version was first submitted to the U.K. censors. If you account for PAL speed-up, that suggests a 104-minute version of the film existed at that point. IMDb's "alternate versions" page seems to back that up, describing a cut that ran "over 103 minutes" that was shortened by 11 minutes before being submitted to the MPAA. I suppose this means that the version on this Blu-ray Disc is the 92-minute U.S. theatrical release restored to its pre-rating glory, with several seconds of MPAA-mandated trims restored. return