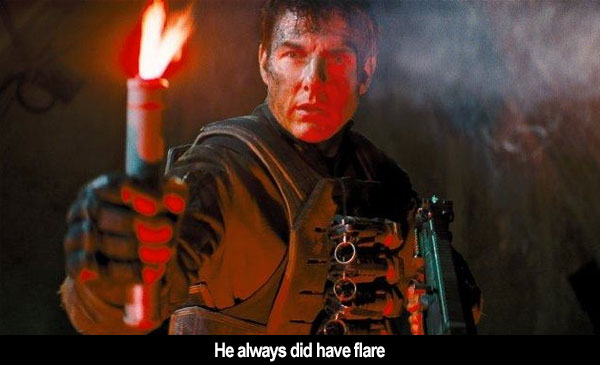 by Angelo Muredda Whatever one thinks of his weaselly insouciance as a performer, it's hard to argue against Tom Cruise's record of choosing solid collaborators to bring a certain kind of high-concept amuse-bouche to life. From Joseph Kosinski's Oblivion, a derivative film about derivatives, to the more or less solid auteurist permutations of the Mission: Impossible franchise, the results have varied, but Cruise's reputation as the sort of star who can get moderately interesting pulp bankrolled and realized by moderately interesting talents has deservedly persisted. So we arrive at Edge of Tomorrow, Doug Liman's first kick at the Cruise can--a clever, fleetly-paced sci-fi riff on Groundhog Day with all the paradoxes of Duncan Jones's structurally similar Source Code but a more playful demeanour.

Cruise plays Major Bill Cage, an ad man turned military spin doctor tasked with reassuring the public about humanity's war effort against a fleet of squid-like invading baddies dubbed "Mimics," on account of their ability to anticipate and subvert virtually any strategy used against them. Summoned from his cushy job as an American media pundit to the humans' base at Heathrow, Cage is tasked by crusty superior General Brigham (Brendan Gleeson) with heading to the frontline to document the newest skirmish, an effort to liberate the beaches of France on the heels of a surprise win at Verdun, achieved (we think) thanks to the soldiers' new mech technology as well as the formidable Mimic kill count of war hero Rita Vrataski (Emily Blunt). Cage opts out, only to be branded a deserter, busted down to private status, and dropped into the battalion's infantry squad. Outfitted with his new robot prosthetic, he parachutes to almost instant death, only to promptly wake up back at the barracks, Bill Murray-like, in time to relive his traumatic yesterday.

Bill Paxton's presence as Cage's ideology-spewing new Master Sergeant seems meant to align Edge of Tomorrow with Aliens on some level, if not to suggest a dystopia where the dim-bulbed Private Hudsons of the world now ceaselessly march their impressionable troops into the maw of the enemy. For a while, that light satire of roughneck culture's minor rebellions, mind-numbing repetitions, and weak delusions of glory--what better way to die than for one's planet, and on a beach?--gives the movie a welcome edge, though one senses Liman's interests lie elsewhere, considering the fuzziness of the critique; after all, Cage's development happens precisely through his gruntlike repetition of basic tasks. Indeed, once the time-loop conceit gets cooking, Edge of Tomorrow reveals itself as something more modest, and assuredly so: a lean quest narrative about an egomaniac's gradual shedding of himself and resultant evolution into a pure instrument for the Cause--dying over and over again so that he might inch his way closer to mastering the system he's in.

If that sounds a bit like watching someone work through a video game in order to write a comprehensive walkthrough of it, that's presumably the point. Everything from the mech-vs.-mega creature battles to the sequences of brow-furrowed war-room strategizing and training tutorials run by Rita, whose warrior chops have a lot to do with her having just made it out of her own time loop, has the tenor of a prolonged gaming session. The danger with cloning the gaming experience minus its participatory appeal, of course, is that it's rarely fun to watch someone troubleshoot for very long. Liman overcomes this deficit by resetting our expectations of Cruise, who's reduced in the first scenes with his poorly-calibrated robot-suit to the equivalent of a new wheelchair user nervously careening through an inaccessible war zone--pot holes, sand traps, and all. Hoary as the training montages with Blunt are, there's something uniquely perverse about watching Cruise learn basic survival skills in his new skin, given his typical projection of obnoxious cool.

Although its overwhelming logic is hence from video games--"I've never made it this far," Cage tells his followers at one point, when asked what comes next--Edge of Tomorrow works best as a gleeful riff on the narrative tricks endemic to the cinema, an art defined more by editing than by images. Working from a patchy script that alternates between overcomplicated and thin (the time loop is explained in the most mundane details, and is no less daft for it), Liman makes the most out of a concept that allows him to patch over a dearth of story with mordantly funny trial-and-error montages of Cage meeting his fate a dozen different ways. The repetitive nature of Cage's mission conversely allows Liman to jettison the tedious exposition we might have been saddled with, writing it off as lessons learned in prior efforts, too numerous to show. Sometimes that shorthand feels like a cheat. Mostly, though, it feels like the inventive solution of a director liberated by rather than chained to his big idea.