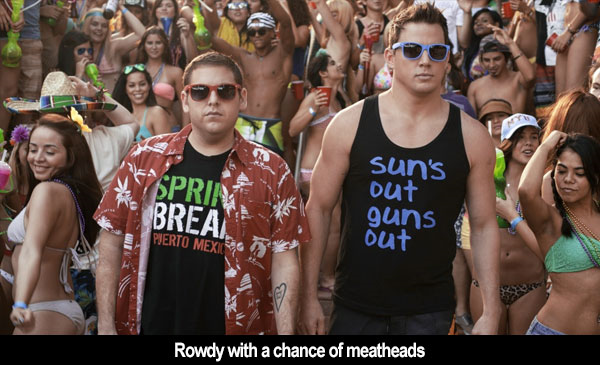 by Walter Chaw The smart parts are unbelievably stupid and the stupid parts are unendurable, making 22 Jump Street, Phil Lord and Christopher Miller's follow-up to their well-regarded The Lego Movie, one of those things like Shrek that should do pretty well. Itself a sequel to a reboot of a cult television show about twenty-something cops pretending to be teenagers, the film finds buddy-cop heroes Schmidt (Jonah Hill) and Jenko (Channing Tatum) going undercover in college, the better to bust some drug dealer. They have a tough-talking superior in Capt. Dickson (Ice Cube), who, this time out, gets a glass office someone refers to as a "cube of ice." Get it? There's much acknowledgment that sequels are often terrible, inflated things deficient in new ideas and reliant on amplification, and it's delivered with this exhausted, arch air. At least that's how I read it. I didn't even crack a smile.

22 Jump Street is the actualization of the "Three" script from Adaptation., except that it's completely self-aware at all times. It answers the question of what happens when something not-very-smart gains sentience. Here's one problem: the source for the majority of the humour is how funny it is for straight guys to be mistaken for gay guys. That's right. It's all a big joke about how Schmidt and Jenko act like a married couple, about tearing anuses and getting blowjobs in the library stacks, and about how Jenko and star quarterback Zook (Wyatt Russell) have what they both refer to as a "meet-cute" over a dropped sandwich and engage in vigorous workout sessions together. My favourite part? The prison-rape sequence, where a kid from the last movie begs for help from the ministrations of his cellmate. It feels a lot like Napoleon Dynamite, in other words: Laughing along is a little like pushing someone into the lockers.

That's fine, people think this is funny. People will think the film is funny. They'll even think the scene where someone calls someone else a "faggot" before getting a lecture about how they shouldn't use that word is funny, even though Hill has recently gotten in some trouble for calling a paparazzi the same expletive--which proves nothing about Hill, really, except that 22 Jump Street is the kind of thing that makes that kind of thing fodder for a casual slip-up. There are a few more meta-references here and again; there's a Peter Stormare cameo that's exactly what you would expect (and that's the joke, yeah?); and there's a post-credits sequence that begins as sort of clever and self-knowing, only to continue way beyond reason. The movie is everything that's been wrong with "Saturday Night Live" for the past thirty years.

22 Jump Street's other joke is that Tatum is athletic and Hill is not, leading to moments where Tatum does athletic things and Hill does not-athletic things. Jillian Bell plays the world's worst roommate as a younger-but-just-as-pasty Rebel Wilson--it's the new classic sidekick position, replacing wacky gay pal or Long Duk Dong in this configuration. So that's progress, I suppose. I didn't laugh not because the movie's sort of appalling: In the right hands (like Louis CK's, or Sasha Baron Cohen's), appalling is genius. No, the worst thing about 22 Jump Street is that all the jokes about its franchising and inevitable sequels are more prescient than satirical. It's not funny because it's as bad as it pretends it isn't, and everything it pretends will happen--the endless sequels, the eager acceptance, the knowing guffawing at smug non-jokes--will actually happen. And soon.