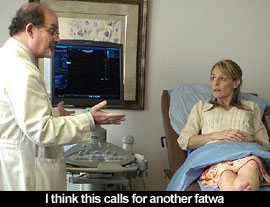 by Walter Chaw Mamet-lite--which is to say "garbage-lite"--for the most part, the dialogue in Helen Hunt's hyphenate debut is repetitive and deeply irritating, especially as delivered by Hunt in that perpetually whinging, laconic fashion of hers. Marry it to a directing style that could gently be called "self-aggrandizing" and generally be called "static" and Then She Found Me thuds into place as one of the most atrocious things to collapse on the silver screen in months. Here Hunt is Barbra Streisand without the singing, optimistically cast as a woman "about to turn forty" while asking poor, mortgage-needing Colin Firth to twice opine that her increasingly cadaverous-looking self is "beautiful" and "gorgeous." To each his own, of course, but Hunt the director/prime mover (she co-wrote and produced the benighted thing) sticking herself in front of a conservative gross of close-ups and pushing others to compliment her appearance is so far beyond distasteful that it's boring. Adoption, artificial insemination, infertility, miscarriage, infidelity, lumpen milquetoast Matthew Broderick as the really, really obscure object of desire, and stereotypes about East Coast Jews pollute this godawful mess like Union Carbide in some unfortunate, populous third-world nation. Call said ghetto the "arthouse" (its citizens, what the hell, "festivalgoers") and point to it whenever the random, ossified, effete intellectuals offer that they prefer to watch "indies" in the "arthouse," eschewing "mainstream" cinema with a sniff, a wave of a hanky, and a puff of talcum.

Gorgeous, Jewish, beautiful, almost-forty (what the hell) April Epner is married to pasty nebbish Ben (Broderick) and trying like hell to spawn when what should happen but (as in Then She Found Me's aesthetic cousin, The Jane Austen Book Club) Ben finds unsatisfying (yet less unsatisfying) love in the arms of another. Crestfallen to the polite strains of coffeehouse folk, April begins a quirky-brand love-like relationship with fellow gay divorcee Frank (Firth), and together the two fornicate to Iron & Wine's "Naked As We Came"--which, to me, will eternally be associated with Jonathan Caouette's Tarnation. Not the first thing I want to think of whilst pitching woo, although it did serve as a nice, distracting corrective to watching Hunt pitch woo. Soon, April discovers that she's knocked-up and then, after making some bad decisions, is punished with a miscarriage that's handled with a discrete dissolve to autumn trees followed fast by a good, long look at gorgeous, Jewish, beautiful, almost-forty April as she pinches her face to genuinely Maria Shriver-like serration and strides purposefully like a middle-linebacker in Annie Hall's wardrobe down some tastefully-shot New York avenue. (Tastefully-shot New York avenues being to these kinds of movies what Parliament on the Thames is to the British versions of this shit.) To say there's nothing new in this movie is to take that as an opportunity to introduce the Bette Midler character of local daytime talk-show host Bernice, who gave April up for adoption almost forty years ago. I know what you're thinking, but I'm not smart enough to make this up. Bernice becomes April's mother/confidante, and together the two engage in an endless Moebius strip of Semitic, Catskills-era bits. Oy vey, at least: it's like an animatronic reproduction of said relationship erected at the world's most racist amusement park.

Hunt's portrayal of a smart, aging (but still under-forty) woman wanting a baby (but not a Chinese one) as made all of flint and severe angles does the spinster crone archetype no favours. Are you telling me the choice for actresses of a certain age is between castrating airhead (Diane Keaton) and castrating straight-edge (Hunt)? Imagine, say, Emily Watson in the role of April, and suddenly it's easier to picture the woman "pushing" forty (Watson's also over forty, though she's only 41) as smart, self-assured, wounded, melancholy, and sexy--imagine, too, this suddenly not being a popular issue amongst dinosaur feminists who like to disregard the casts of "Desperate Housewives" and "Sex and the City", Julia Roberts, Meryl Streep, Judi Dench, Michelle Pfeiffer, 36-year-old Gwyneth Paltrow (lead sexy-time in teen-friendly Iron Man), and 38-year-old Tina Fey, to name a few, in insisting there are no good roles for older women. You know what? There are hardly any good roles for anybody--but I do seem to recall that four of the five nominees for the Best Actress Oscar this year were over 33 (Cate Blanchett's 39, Laura Linney's 42, Julie Christie's 67)--make that "38" for four of the five supporting actresses. Anyhow. Hunt acting like an iceberg having a severe hormonal episode might have played opposite limp-dick Paul Reiser on Must-See TV for "The View" demographic, but it doesn't play here and it sure as shit doesn't play from behind the camera. Further, it only potentially opens the door for older actresses wanting to play frigid harridans (or their nudzing mothers) in vanity pieces--a disappointing thing for a film directed, co-written, and produced by a woman, non? I do wonder if we can finally put Hunt's career to rest now. It's the best thing for everyone. Originally published: May 9, 2008.