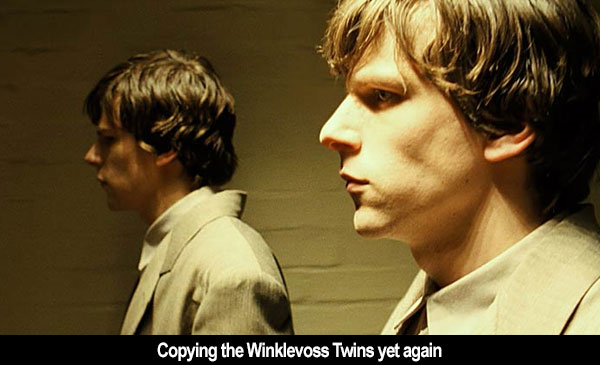 by Walter Chaw Writer-director Richard Ayoade's follow-up to his well-received feature debut Submarine, this loose interpretation of Dostoevsky's The Double plays rather like Kafka adapted by David Lynch, or Terry Gilliam at his most restrained. It's good. It doesn't plough new ground, necessarily, but its dedication to a theme and a very fine performance by Jesse Eisenberg as a man and his titular doppelgänger carry it over its rougher patches. Visually engaging with its washed-out, diseased, Cronenbergian/Lars von Trier colour palette and packed with innovative, maybe self-conscious camera flourishes and affectations, it all plays out a bit insular, a little too obvious given the entire history of the double in this kind of movie, but at least it's executed with a persistence of vision. What catches me up short about Ayoade's films, though, is that ineffable quality of audition reel. They're entirely identifiable by the breadth of their references: Submarine for its obvious connection to Harold and Maude (and why do I keep hearing "The Only Living Boy in New York" when it unspools?), now The Double with its portfolio of referents. If it happens to be assembled smartly, more's the frustration. I can't tell whether the movie is good because Ayoade's a gifted filmmaker or simply a great scrap-booker. I guess it doesn't really matter.

What does matter is The Double's sense of affected cynicism. It feels, just as Submarine feels, more flip than insightful--its lament against the Orwellian bureaucracy it's created only correct and not impassioned. It's the right thing to do to hate cubicles and middle-managers. What compels is the existential source, which finds workaday drone Simon (Eisenberg) ineffectually sleepwalking through his interactions with his boss (Wallace Shawn), the girl he has a crush on across the way, Hannah (Mia Wasikowska), the surly attendant at his mother's nursing home ("Did you know the tenants have weapons?" "Yes."), and finally his own double, James (Eisenberg), who has all the confidence Simon does not. Shades of Harlan Ellison's "Shatterday" and Clive Barker's "Human Remains," where a doppelgänger lives the hero's life, better, and there are elements of social/corporate satire embedded in the material. Credit to Ayoade for making what's explicit in Dostoyevsky into something a shade more subtle--at least until a denouement that wraps everything into the package you'd expect. The biggest surprise of the piece is Wasikowska's uneven performance: her accent dropping in and out, she generally gives off the impression that she squeezed this thing in between a full dance card. After two films, Ayoade remains an emerging talent. A few more of these, however, and he may be branded a pastiche artist as opposed to his own beast.

Jim Mickle doesn't have to worry about that with now his third, distinctive foray into genre cinema, the Joe Lansdale adaptation Cold in July. Following up in fast order his exceptional We Are What We Are, Mickle demonstrates the same intelligence and sensitivity in adapting quintessential Lansdale pulp: dirty and economical. In this one, schlub Richard (Michael C. Hall) shoots a home invader who happens to be the son of real bad man Russell (Sam Shepard), someone who, fresh from the pokey, arrives in Richard's small Texas town for his pound of flesh. Eventually, private fixer Jim Bob (Don Johnson) enters the fray. There's stuff about snuff videos, as well as a fairly violent shootout in a warehouse that puts an exclamation point on the movie's themes about sins of the fathers and legacies of violence. It's a fairly routine story, then, that ever-threatens to spiral out of control, yet Mickle shows a deft hand, creating a real '80s feeling in score and lighting that makes Cold in July a nice double-feature with Nicolas Winding Refn's Drive. Better, he gets career performances from Shepard and Johnson that buoy the material. They provide effortless authenticity in contrast to Hall, who seems like he's trying too hard. Shepard, in particular, is fantastic. When he's on screen, it's difficult to look anywhere else.

Ultimately, Cold in July is an accomplished period piece with a couple of tremendous turns by veteran character actors. If it feels over-plotted, blame Lansdale--an author I admire but who could never be mistaken for reserved and moderate. What works about the film works very well, and what doesn't mostly feels superfluous rather than truly failed. Narratively, there's enough stuff in here for two distinct movies when, in reality, all you really want is more time with Jim Bob and Russell. As problems go, there are worse ones to have.

Both The Double and Cold in July are currently available On Demand, raising the question of the effectiveness of both this distribution model and the technology available for its dissemination. Watching Blue Ruin again recently on VOD, I found it to be choppy and, ultimately, I stopped it about 2/3rds of the way through because of all the glitching. I like the idea of VOD and hope the technology stabilizes soon. More nettling by half is the old embargo model that has resulted in requests to delay reviews of movies already available on VOD. Because local publicity has provided screeners for these films, the thinking is that the reviews, despite being written for an international publication on the Internet, should be held until they open theatrically in Denver. No matter that people have been watching them at home, sometimes for weeks. The danger is that publicity makes itself as irrelevant as print journalism by being slow to refine their thinking. What a shame that would be.