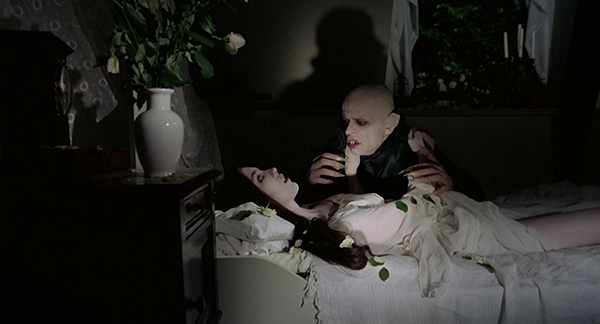 by Walter Chaw Nosferatu the Vampyre isn't scary so much as it's just delightful; not topical so much as it's an extremely competent, sometimes inspired tribute to F. W. Murnau and his classic 1922 Nosferatu. Werner Herzog's hand at the rudder is steady and Klaus Kinski's performance as Count Dracula is definitive, but the picture is an exercise in style generally lacking in the New German auteur's main throughlines, i.e., representation, class, and the vagaries of the creative process. What does survive relatively intact is Herzog's nascent surrealism, which flowers during the picture's endlessly disturbing tableaux of plague victims celebrating the last of life with rat-infested banquets and danses macabre. One could extend a little and support that the film's scenes of apocalypse and pestilence hint at a loathing of immigrants and the perception of cultural corruption, but there's a damning ornamental emptiness at the centre of Nosferatu: Phantom der Nacht (henceforth Nosferatu) that places it forever out of time--without a father, as it were. The film's reason for being (it's a shrine to Herzog's favourite German director) is also the end of the conversation.

To that end, however, Herzog's steady mastery of landscapes and time-lapse photography create a feeling of nature as a predator lying in wait as doltish Jonathan Harker (Bruno Ganz) makes his way to the ruined castle of mysterious Count Dracula. As played by Kinski, the bloodsucker is uncomfortably fey and declining; the scene where Dracula shares dinner with Harker upon Harker's arrival in Transylvania is a masterpiece of understatement. When he sinks his rat teeth into Harker and, later, Harker's bride Lucy (Isabelle Adjani), he does so with a creepy tenderness that's repulsive at best, disturbing at the least. (With his fingers extended into claws, this Dracula cradles his victims' heads like an infant cradles a breast.) Roland Topor steals the show as Renfield in a too-brief cameo, while the resolution of the fable, involving Lucy's ultimate, Pyrrhic sacrifice and the Count's insectile death scene, is immensely satisfying. Despite much to recommend it, Nosferatu remains a feather-light curiosity in Herzog's filmography--a picture so personal that it's impersonal, and an homage to Murnau so slavish that its native genius is asked to play second fiddle to its creator's meticulous fanaticism.

THE DVD
For their Herzog/Kinski box set, Anchor Bay scraps the English-language version of Nosferatu included as a supplement on the film's standalone DVD releases, isolating the 107-minute German cut of Nosferatu in a slightly muddy 1.85:1 anamorphic widescreen transfer that I'm guessing recreates with fidelity a dreamy visual sensibility closer to that of Herzog's nightmarish Heart of Glass than that of Stroszek. A featurette (13 mins.) sees a very young Herzog discussing the theatricality of his settings while giving a brief montage over to the amazing faces the Bavarian finds without fail to fill out the spaces of his films. Conversation is largely about how this will be an attempt to bridge German Expressionism with New German Cinema, an ambition that's only partially fulfilled, I think, insomuch as Nosferatu seems more interested in transplanting Expressionism whole into the late-'70s. For all the heat Kinski gets for being insane and unmanageable, this piece is most valuable for offering glimpses of the actor working to refine his craft--making of his monster a fiend as obsessively clothed in gesture as the master of a Japanese tea ceremony. In a commentary ported over from the previous DVD(s), Herzog (joined once again by Norman Hill) claims that the mummies that open Nosferatu are real and from Mexico, recounts some of the difficulties of casting non-professional actors in cameo roles, and of course maintains that Kinski was a raving lunatic. Three trailers as well as a nice Dolby Digital 5.1 alternative to the 2.0 mono audio round out the presentation. Originally published: May 18, 2005.

THE BLU-RAY DISC
by Bill Chambers It's hard to know what went wrong with Scream Factory's Blu-ray release of Nosferatu--or where to begin. For starters, cramming two 107-minute features--the German- (hereafter Phantom) and English-language (hereafter Vampyre) incarnations of the film--onto one dual-layer platter was probably a mistake, as key shots of a tempestuous night sky betray insufficient compression in the form of banding in Vampyre, which gets a paltry 19GB compared to Phantom's 26GB. The German version probably occupies more space because of bit-hoggers like this: 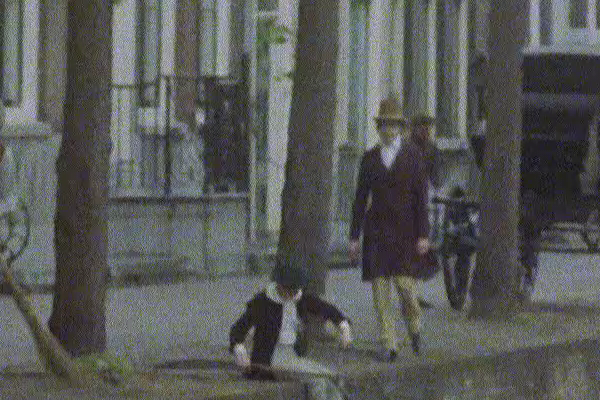 What you're seeing there isn't grain, but noise--additive digital noise, beneath which everything looks waxy because of DVNR, creating a bizarre motion artifact akin to those horrid 120Hz motion interpolators that are the default setting on TVs now. Here's the same shot in Vampyre: 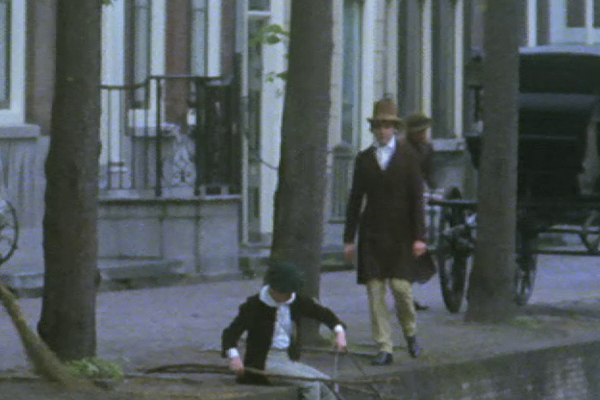 Free, at least, of that fake grain but free, too, of the real stuff. These 1.85:1, 1080p transfers are less inconsistent with each other thereafter in terms of grain or lack thereof but graded very differently. Phantom, in general, features a more vibrant if perhaps more artificial palette, as well as a hint of black crush, while Vampyre may be a touch too bright. To wit:

More maddening is the inconsistency of the transfers in and of themselves (Vampyre, in particular), especially during the first third, when the film's dynamic range fluctuates and the intensity of DVNR (always too much) varies almost from shot to shot. There are brief stretches in both versions--during Harker's journey to Dracula's, for instance, from about 21:30-22:00 in Phantom and about 22:10-22:40 in Vampyre (the film's dialogue scenes were shot separately in English and German, accounting for deviations in running time and, occasionally, framing)--where the grain is gloriously authentic and untampered-with, and the detail is lovely and glassy, but they are the exception rather than the rule. Too often, when true film grain is visible, it remains frozen in place by miserable image processing.

Let's talk about the opening credits, which seem to be a lo-res After Effects output and actually alias on the diagonals. Here's the "W" in Werner Herzog, reproduced unaltered:

The "day of the dead" tableaux beneath these titles is meanwhile so appallingly degrained that there are disorienting parallax shifts whenever the camera moves. Since I find Vampyre a touch more hypnotic as a movie, that's the option I "recommend," but technically they're a wash (and a mutual wash-out). Note that only Phantom contains a 5.1 mix, though for what it's worth, I detected little compromise in the 2.0 English-language option, which is likewise encoded in DTS-HD MA and sounds adequately full in Pro-Logic. The audio is clearly the best thing about this disc, not counting the recycled Herzog commentary.

Also returning is the aforementioned vintage making-of featurette, in digitized-looking SD; a block of three trailers, the last and most impressionistic of them in HD, rounds out the platter, a rare but spectacular disappointment from Scream Factory. I hope the selections in parent company Shout!'s upcoming Herzog box set fare better.