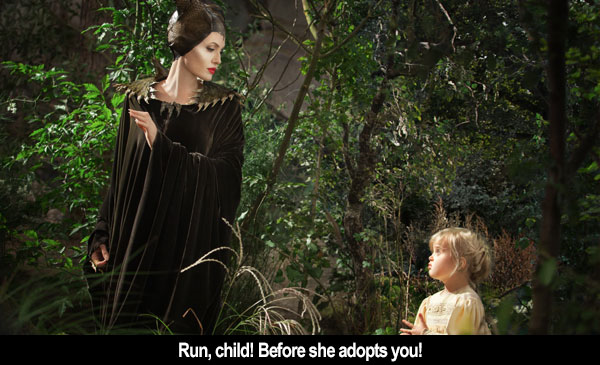 by Walter Chaw A gyno-centric reimagining of Disney's own Sleeping Beauty, visual-effects guy Robert Stromberg's directorial debut Maleficent (from a script by never-good Disney house-overwriter Linda Woolverton) takes all the ingredients for a horrible disaster and somehow wrestles a fitfully fascinating film from them. It hates men, that much is certain. Paints them as alternately servile and monstrous. Good men follow orders and are easily intimidated; bad men are sexually dangerous and violent. Good men know their place, led about on a tether and bullied into situations by women in groups or singly; and the rest, well...sufficed to say that Sharlto Copley, the most Ellis-from-Die-Hard human, is cast as chief BigBad, the good king Stefan. The film even goes so far as to suggest that romantic, heterosexual love is a sham, a dangerous one at that--something it tries to soften with a couple of doe-eyed exchanges during the epilogue, though I'm not buying it. In fact, had Maleficent truly committed to its themes of feminine empowerment and rage, had it linked them together hand-in-hand without entire agonizing stretches of Disney-fication, it could have entered into the same conversation as Tarantino's Kill Bills. Here's another film with a kick-ass female protagonist who finds strength in motherhood. Alas, for as often as it's great, it's limited by what its masters will allow.

Still, Maleficent opens with a solid thirty minutes of exhilarating creation mythology. Maleficent (Angelina Jolie, typecast), a tremendous thing all of Rick Baker cheekbones, "Spirit of Ecstasy" Rolls hood ornament, Joan Crawford, and a Maxfield Parrish calendar, leads an army of elemental beasts inspired by Stromberg's own work on Pan's Labyrinth. Zeitgeist watchers, take note: in tandem with Noah's dirt-encrusted Nephilim, it's already a good year for the earth rising in defense of itself. Winged Maleficent, pointedly designed as demonic and illicitly sexy (Christianity's twin bogeys), is defender of "the moors"--the sylvan wie, as it were, standing in tension against the civilization and order of Man. There's a Christian/heathen subtext here, but it's just one of many. Too, Maleficent is a reimagining of the character as one wronged by not Man, but an individual man. Sleeping Beauty's villain, she's very much the heroine of this piece: an almost-literal Leda, as it were, who literally takes on wings in a laden conclusion. Counting subtexts, the wings are symbols of loss, then empowerment; imprisonment and freedom; decrepitude (see her cane) and youth; experience and innocence.

Stefan wins Maleficent's heart as a child, then betrays her (spoiler alert) by cutting off her wings while she's drugged. It's loaded with gravity, not only because of Jolie's much-publicized double-mastectomy (making Maleficent's mourning of her loss physically uncomfortable to witness), but also for the idea that, having been drugged, she wakes to find her innocence stolen by a man she trusts and loves. It's a rape scene. The rest of the film plays out like a rape-revenge saga, ending in Maleficent's acceptance of a surrogate daughter, Aurora (Elle Fanning), and murder--don't call it self-defense--of her attacker. There's deep irony for me that revenge is so embedded in the Disney culture. Maleficent would've been a masterpiece had it dealt with its issues without comedic distraction and, moreover, without the requisite Disney murder of the villain. Maleficent, well-established within the film as capable of saving things from fatal drops, pointedly decides not to save Stefan. Her act of omission orphans the little girl she professes to love the most. By not giving Maleficent grace at the end, the movie betrays the character's growth--it suggests that the only way through trauma is an equivalent, opposing trauma. It's the old cure for amnesia; Jolie, and Maleficent, deserve better.

The film is weakest, in other words, when it's forced to follow Disney protocol. A trio of pixie nannies (Imelda Staunton, Leslie Manville, and Juno Temple(!)) provide mealy domestic slapstick in an interminable middle section, while a milquetoast Prince Charming (Brenton Thwaites, fresh from a One Direction photo shoot) with the thankless task of being led around like a helium balloon balks a little (but goes ahead anyway) at the rapey implications of kissing a girl he barely knows, one who's also unconscious. Maleficent, compounding its misandry, isn't overly impressed with the sixteen-years-in-the-making machinations of Stefan and his team of iron-workers. The fruits of their labour? A net, I think. The one truly sympathetic male, Diaval (Sam Riley), is essentially a slave dismissed, silenced, ridden, and bonded. Though he doesn't mind, Maleficent should, but then it doesn't deal well with conflict. See its easy dispatching of parents, or the casual enslavement of sentient familiars and "justified" murder of its antagonists. I would have preferred a détente rather than an enactment of another vengeance scenario--an attempt to understand the toll suffered by both sides of the conflagration.

Maleficent is a reminder that Jolie has already been inspired in this role as the "Mrs." in Doug Liman's great Mr. and Mrs. Smith. She's a convincing villain, a convincing mother, a convincing mourner. She gives the movie unexpected depth and complexity, and she's game when the script disappoints with all that crap that's not about getting pricked, bleeding, and falling into a deep sleep upon turning the corner on sweet sixteen. Maleficent is two-thirds a great spectacle and potent cry of rage about the battleground eternal of gender politics that shockingly deals with rape and its emotional fallout in a series of seriously-arranged allegorical scenarios. And it's one-third a Disney movie that doesn't deal with anything in a mature way, choosing violence and contrivance and so desperate to put a daisy on everything. But what's good is really good. You can only hope it inspires the right conversation.