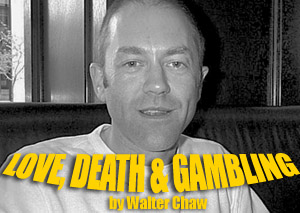 May 4, 2003|Small and soft-spoken, director Richard Kwietniowski is quietly emerging as one of the most exciting new "serious humanist" filmmakers of the last ten years. His two feature films, Love and Death on Long Island and Owning Mahowny, his latest, tackle issues of love and obsession with a deft visual sense and a surprisingly gentle touch. In Love and Death on Long Island, Kwietniowski fashions one of the most enigmatic and charming characters since Chauncey Gardner with John Hurt's reclusive author Giles De'Ath: after a humiliating radio interview, the technology-shy De'Ath finds himself in the wrong theatre watching a cheap teensploitation flick starring "Tiger Beat" idol Ronnie Bostock (Jason Priestley); smitten, De'Ath embarks upon an unlikely quest for beauty and completion that brings him into the modern age and too close an association with the truth behind the fantasy.

Almost formalist, Mr. Kwietniowski's background is in literature--he has a particular fondness for the poetry of William Carlos Williams that serves him well, demonstrating itself in Kwietniowski's respect for narrative and economy of story. As he puts it, "I think I've always been interested in stories and how stories are told. That's always been the biggest draw for me in finding projects." Owning Mahowny returns the director to an examination of obsession and detachment in the modern age--destructive love elevated as commentary on the human condition. For Kwietniowski, it seems that the fires in which we burn are the crucibles that make life worth the living.

I met Mr. Kwietniowski in a quiet bar off Denver's 16th Street Mall, where we shared a pot of Earl Gray among the lunchtime stragglers, illuminated by the kind of shafts of mid-afternoon light that might punctuate one of the director's own meticulously framed tableaux.

FILM FREAK CENTRAL: I read that you storyboarded all of the scenes in Owning Mahowny.
RICHARD KWIETNIOWSKI: Yes, I tend to do that because it helps to clear my thoughts and partly so that I can communicate better with my heads of departments. Instead of trying to describe things in a woolly fashion again and again, I can actually say here's a comic strip version. Once done, it also gives me the confidence to change my mind on the day we're actually filming. My approach to actually filming, though, tends to be brevity. I don't want to show the entrances and exits, I want to start in the middle of the action, in the middle of plot--so it means that I don't do coverage for every scene and so the storyboarding, too, is a case of being very practical in saying, "This short scene is this one shot," and then I can run ahead in the board and see what to set up next. It's a way to help myself and other people that I work with to get inside of my head and to keep things apace.

There's a strong sense of "story of place" in your films, from John Hurt's book-lined study from Love and Death on Long Island to his opulent casino office in Mahowny--and of course Mahowny's empty apartment and sterile workplace.
That's quite interesting because in both films feature sort of a journey across borders into different spaces. In Love and Death the central character Giles crosses the Atlantic and finds, sort of, this new world full of things that are fascinating to him. People are generous and sincere to him, so it's a journey that he undertakes to become a different person in essence, a person who is capable of accessing his emotions and, by the end, even saying "I love you" to someone. Of course it's the least appropriate person (laughs)... So then you see this film with Dan journeying from a very orderly Toronto, austere, cold, ice, sleet, crossing a border into another land, the kingdom of his libido. You can use staging to reflect what's going on internally with the characters. The casino design, for instance, I wanted it to be subterranean, y'know, something infernal, this series of rabbit warrens in a state of perpetual semi-dark. Usually when you see casinos in film, they're sort of glamorized--but if you take half a step back you see a different picture: players at the slots look a little like pigs to the trough. The difference between that floor and Foss' office... I was very conscious of what happens in those environments and what those places told about the inhabitants and the effect they have on their visitors.

It's especially odd on Long Island, you know, you have these people unaware that just behind the blacked glass there's the beach, there's the ocean...

The final 'scene' in Thomas Mann's Death in Venice (the novel that served as inspiration for Love and Death on Long Island -Ed.) is of an unmanned camera on a beach, an empty observer in a sense--Mahowny plays a pivotal scene in front of a bank of security cameras...
That immediately interested me--the bank and the casino both being policed states. You're watched in both. It's become more and more relevant in the ways that we live and it's very scary, the intersection of the personal and the public--and there's that idea in the picture of transgressing boundaries again. But part and parcel with that idea comes the opportunity in your film to do a "stage within a stage" drama, something about detachment and the irony of intimate technologies causing a greater distance and commentary simultaneously. I liked the idea of that layering of representation because it's all ultimately about control of image. I wanted to convey the fascination, too, of Hurt's character for Mahowny because he's such a purist, this gambler, this chump in cheap suits. You see that, of course, in Love and Death with B-movies. 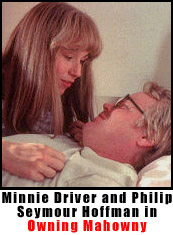 Taking for granted that your body of work is generally concerned with homosexuality, can you address your protagonists as "secret outsiders?"
Well it's something broader than that I hope--it's the idea that everyone is essentially an outsider in that you not only don't know very much about someone else's private life, you know even less about their secret life. Things that are so personal to them that no one else can know about them. I think that the "outing" of Mahowny's secret life is sort of a relief to him. He has to have the rest of the world acknowledge his secret life, y'know, and that's the irony that I genuinely believe that Mahowny wanted to win the money back because he had so much at stake. He had a brilliant banking career, a loving girlfriend, and he was living through hell trying to juggle these two worlds. Consciously he really did think of himself as having a financial problem, and it must have been a relief to understand what issue of identity it really was that he was struggling with.

Tell me about your work in the short film format.
Well, my first film Alfalfa, the idea of the film was the film. I tried to do that with each short film that I made, I tried to find a character or attitude to make the film interesting. You have to grab people's attention because it's generally going to be shown in a package of other short films, or as filler on television or a prelude to a feature--therefore you should try to something extreme or risky. Something that isn't a baby feature film, as they're often not that interesting.

You have no formal training as a filmmaker.
No, I've always been compelled to do what I was compelled to do. Making short films in a way was my film school education, it's how I met the cinematographer that I still work with, the three composers I still work with to this day--but after the first couple of shorts I did, I started being offered work as a director of television. It surprised me a little, but it was great. I learned a lot about filmmaking and I was paid for it at the same time.

It took five years to make Love and Death and then five more to make Mahowny, why the long intervals?
What takes the time and the effort is finding finance. Certainly in Britain, it hasn't gotten any easier for me for how well the films have been received. In the years between the first film and this I wrote at least one script a year, but I've had a bit of bad luck, not quite getting money here, almost getting some there--and the first project we could get support for was Mahowny. We almost made a film a year in those years, it was really frustrating.

And yet for all that, Owning Mahowny isn't a screenplay that you're credited for.
I'm not credited for sort of complicated reasons, but basically we rewrote about seven times. The original script I turned down originally because, well, it was good but it was a very different kind of film and one that I wasn't interested in.

How so?
Well, it was more about what caused the guy's addiction and there was an awful lot in the casino, and what I wanted to do was try to bring the bank "up" and make the two worlds equal. I was interested in the money issue between those spaces, so I kept the basic structure, but I reinvented basically a large part of it. Probably what's closest to the original is the characterization of the John Hurt character, but there was certainly a great deal of revision.

What is Regret Not Speaking?
Regret Not Speaking is a script I wrote the end of last year that I've started to show around. It's another story about obsession of course, about two people who meet on a plane. In the broader sense, I think it's about urban relationships and the fact that the city is a very impersonal place. There's also the idea of modern technology bridging the gap between fantasy and reality and whether or not that's a good thing.

Is there a "Prufrockian" sort of quality to your films? A melancholy yearning?
I'd put it differently. I think both films are after transcendence. The difference is that in Love and Death, Giles is a very solitary character among the dust and the books, the deaf housewife--it's not as if he wants to be a part of something greater, it's that he's driven to find something that makes more sense to him than anything else in his life. Love is an addiction, it becomes everything, and nothing else seems to matter much anymore.

Interesting that we're talking about this as "Madame Butterfly" is playing on the PA...
(laughs) That's right, that's right. In Mahowny I think it's not about finding somewhere where he belongs--I mean, he's awkward and embarrassed and would be much happier just playing in a corner with his back to everyone else. But I think that no matter how in his element he is in his environments or not, there's something that's driving him again and again to the gambling tables. These are terrible moments for the characters, when Giles says "I love you" and when Mahowny can't avoid the casino--but it's something more spiritual, something more complex than mere acceptance involved for each of them.