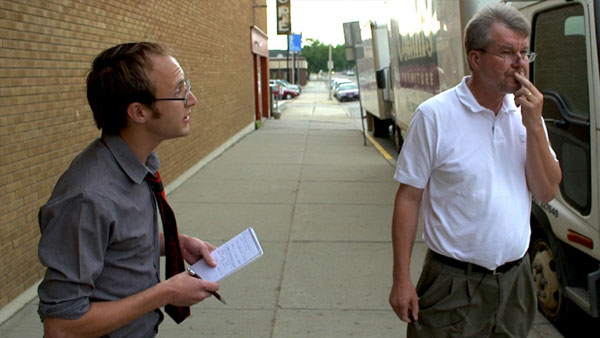 by Angelo Muredda The intersection of the financial crisis and the North Dakota oil boom has turned Williston, ND into an unlikely mecca in the past few years. The influx of unemployed men who've left their homes for a new, thoroughly American, and probably-doomed shot at redemption on the oil fields is the subject of Jesse Moss's Sundance-feted The Overnighters, a complex look at how this mass exodus and uneasy resettlement has brought the residents of Williston to the limits of their compassion and brotherly love. The film focuses on the Herculean efforts of pastor Jay Reinke, who has turned his church into a makeshift home base for the new arrivals--to the chagrin of the facility's neighbours, who are skeptical about the men's scruffy appearance and possible criminal backgrounds, and the open hostility of the town newspaper, which wages war on Reinke's new congregation by publishing a list of former sex offenders harboured in the church as well as in the pastor's own home.

Moss approaches this loaded material with the steady hand of a filmmaker who mostly wants to get out of his subjects' way. The Overnighters is a fairly minimalist affair, distinguished by its non-intrusive cutting, brief captions (to contextualize the oil boom), and T. Griffin's faint guitar score. That solid if not especially innovative treatment may be the best way to handle this inherently difficult material, as at bottom this is a film about people attempting to reach out to one another across various political and moral voids. Where contemporary religious movies like Heaven Is For Real spell their messages out in overbearing sermons, Moss's doc takes seriously the Christian ethos of loving one's neighbour as oneself as its central conceit, and allows it to be tested by the actions of not only Reinke, but also the harboured men and the city councillors tasked with deciding what is to be done with them. For Reinke, who is troubled by his new parishioners' pasts as much as he is haunted by his own unsorted issues with his sexuality, the men's presence in the town is nothing less than a referendum on whether Williston is an actual community, and whether his church can call itself one if it discriminates on the basis of its members' criminal backgrounds and economic status. If The Overnighters' form is a bit prosaic, then, the issue at stake is nevertheless refreshingly Big Picture.