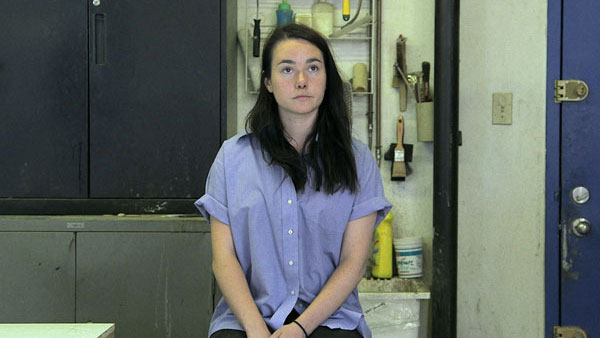 by Angelo Muredda Although it's set in a factory rather than a zoo, Joy of Man's Desiring makes a fitting companion piece to Denis Côté's Bestiaire. Where the minimalist, formally austere Quebec filmmaker's previous documentary unfolded through a series of static frontal tableaux featuring animals displaced into some rather unnatural habitats, surrounded by bars and cages (the most extreme one being Côté's own mise-en-scène), his newest focuses on the alienated humans behind the machines that yield all manner of metal alloys, wood cases, and garments. Following an elfin worker's dramatic monologue about the nature of labour and human intimacy--she's played by an actress, the first of many instances where Côté throws a theatrical dirt bomb into the staid form of nonfiction--the symphonic title sequence sets the tone. It's a montage of self-propelling machines engaged in uncannily human dance moves, more unnerving still when considered in the context of some of the curiously mechanical human behaviour that follows, like when a worker loops around a cart full of boxes, elegantly dispensing a ream of Scotch tape as if he's wrapping a mummy.

That tension between the human and the machine is Côté's central dynamic, though Joy of Man's Desiring doesn't come across as especially polemical about the fate of the lowly worker in the age of industrial labour. Those sentiments, when expressed, are deferred to the heightened Brechtian register of the opening, as when a second actress flatly begs her God for a job that will give her strength and courage, and let her feed her child. This isn't to say these leftist sympathies are insincere, so much as that they aren't the film's focus. Rather, Côté seems more interested in the accidental intermingling of these two worlds--the beautiful contingencies of an actress clad in grimy blue overalls, or a group of actual factory workers held rapt before a little boy's incongruous violin performance in their otherwise poetry-free place of work.