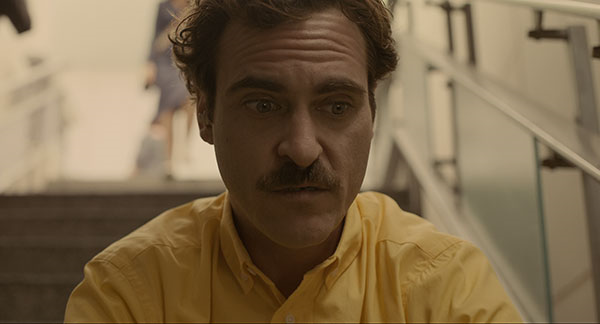 by Walter Chaw Two moments early on in Spike Jonze's Her. The first when our hero, Theodore (Joaquin Phoenix), initiates his new operating system, Samantha (voiced by Scarlett Johansson), and is asked to characterize his relationship with his mother; the second when, in flashback, Theodore and his ex, Catherine (Rooney Mara), pretend to choke each other. They're waypoints Jonze establishes for his piece: in one direction, there's Blade Runner and its questions of proximate humanity; in the other, there's Eternal Sunshine of the Spotless Mind and its mad love. Jonze establishes, too, that this will be a work of science-fiction owing its parentage to the best sources, that its premise will be fantastic but grounded in characters and their place in the world. Of all the compliments I can think to pay this film, the best is that Her is at least the equal of its waypoints. More, when its solution recalls the metaphysical coda to the great The Incredible Shrinking Man, it's the equal of that as well.

Theodore works for a letter-writing company. From what I can gather, people provide him with personal information and then Theodore contemplates their photo, develops empathy with them, and writes love letters on their behalf. He's a relationship facilitator, but when he returns to an empty apartment and a late-night sex-chat roulette line, or when he walks home through streets of people talking into their devices, we understand that he's genuinely alone. I think I was most stricken in Her by the idea that the themes and many of the images of modernity Edward Hopper introduced in his lonesome paintings are brought to their fruition here and, better yet, not in ways that are trite. If you look at "Nighthawks", you'll notice that none of its patrons are connecting, and outside it's still dark. There's a moment where Theodore, afraid that someone he loves has gone missing, runs through the city streets and falls, and all the citizenry wrapped up in their technological cocoons stop to help him, asking him if he's okay. It's a prime moment for satire, for Jonze to pound home the message that we're separating ourselves from one another--but instead, he goes in the opposite direction: We go inside because we crave connection, and although we recognize the dissonance in that, our need pushes reason aside. Her is like that. An immensely humane film, it has an unbelievable ear for dialogue. And with my new favourite cinematographer Hoyte Van Hoytema (Let the Right One In, Tinker Tailor Soldier Spy) at the helm, it possesses a remarkable level of intuition about what to look at. For thirty seconds or so right in the middle, it doesn't look at anything.

The first object of lust for Theodore is a pregnant television star (May Lidstrom) he fantasizes about while engaging in anonymous sex talk. Making a pregnant woman the object of fantasy is unusually loaded--it's impossible to see her as just an object, after all, because she's tactile, physical, in a way the usual model wouldn't be. She represents potential. In fantasizing about her, Theodore prefigures the creation of Samantha, just as his anonymous tryst prefigures his future non-tactile relationship with his computer's OS. It builds Theodore's character without anything like exposition; amazing, really. Look at the wardrobe, too, the future fashions all high-waisted and frumpy--that by itself is isolating. And humanizing. Theodore lives downstairs from budding documentarian Amy (Amy Adams), who's seeking authenticity in a piece that reminds a little of an Andy Warhol "vérité" project with Edie Sedgwick, though Amy's subject is her mother. Amy's lonely in marriage, and it becomes clear that Her is in many ways as much about the variety of solitude (in crowds, in couples, in actual solitude) as it is about the multiplicity of relationships.

Samantha evolves from an "it" into the titular "her" for us at the same rate she does for Theodore. The question isn't whether or not she is sentient, but whether we're equipped to judge the difference--whether there even is one. Samantha expresses joy. She expresses a desire to learn. In a scene that devastates for its understanding of an artist's hunger for validation, she reads all of his letters, chooses the ones she likes most, and does something to contextualize, memorialize, his work that is loving and unexpected. It's so hopeful an example of this variety of science-fiction that Samantha isn't hostile, as although she reveals her differences in a multitude of ways (she composes songs, then concertos; she reads a book in under a second, then participates in the resurrection of dead philosophers), she never "turns" on him for his superfluity. A good portion of the picture's grace derives from the idea that this alien, obviously superior intelligence is benevolent and empathetic. Her is the essence of that particular dream of man--as well as, it must be acknowledged, an evocation of an archetypical betrayal by gods we erected to comfort us eventually finding no use for our entreaties and desires.

Johansson deserves all the praise she's received for her performance here. Between this and her unnamed alien from Jonathan Glazer's Under the Skin, she's neatly carved out a space where she's allowed herself to comment on her odd position as an object of desire with intelligence and grace. (An actress known for her appearance, she chooses to be disembodied.) Between this, Under the Skin, and Lost in Translation, she's fashioned an enviable trilogy of existential masterpieces. Johansson is my favourite actor working right now--I wouldn't have thought that would happen. The puzzle of Her is that Samantha is so fully realized as a character that at some point it's no longer strange that Theodore is in a relationship with her and has fallen in love with her. We believe that she's fallen in love with him back. When they fight, she pauses and, sounding heartbroken, says that she doesn't like herself "like this" and hangs up. I've heard that before, and I've been hung up on that way before, too. And I deserved it like Theodore deserves it. It really stings to hear it again.

I've said about the films of frequent Jonze collaborator Charlie Kaufman that I don't understand them but they seem to understand me. I have to say the same for Her. I love this movie, a lot. Jonze has listened to the way people talk, has intuited how they fall in and out of love, how they deal with betrayal and loss, how they somehow summon the strength to do it all over again. By removing the physical, he comments on the physical. One of the film's great surprises is the way it imagines cottage industries and professions that crop up as more people begin to date their operating systems (and operating systems belonging to others), and in one sequence featuring one such enterprising individual, the question of the physical nature of relationships comes into queasy, dangerous focus. The only analogue to the Samantha character I can think of is HAL (or KITT from "Knight Rider", I guess), and she likewise represents something haunted and true in that just as the best art points back to the self, our creations inevitably resemble our desires. Her is about how we interact with the world, about the responsibility we have in shaping it for ourselves and its influence on others, about potential and what that looks like when it's squandered. I guess at the end of the day, what most affects me about this movie is that it's ultimately about what potential looks like when it isn't. I haven't stopped thinking about Her since I saw it. It's a gift when anything does that. Originally published: December 18, 2013. 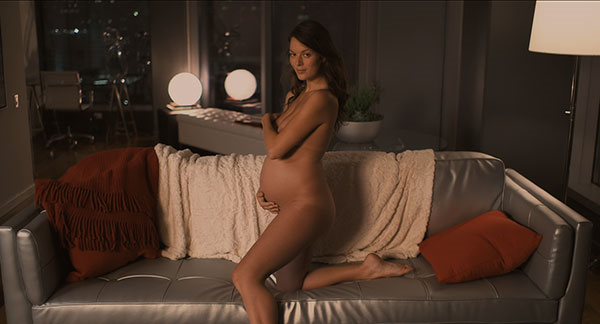 THE BLU-RAY DISC
by Bill Chambers Her arrives on Blu-ray from Warner in a 1.85:1, 1080p presentation. The aspect ratio is especially noteworthy, because Warner has, since time immemorial and with few exceptions, cropped or unmatted 1.85:1 titles to fit the 1.78:1 dimensions of HDTV. It's just a sliver of picture info, but clearly it was important to Spike Jonze, who seems to have had a significant hand in this release: rather than the studio's boilerplate hieroglyphics over a generic freeze-frame, the elegant menus feature a lengthy loop of Theodore plucking the ukulele as a backdrop to a list of options; and the disc itself has a teal silkscreen instead of the standard black. Though the infrequent Blu-ray buyer probably won't appreciate these subtle deviations from custom, if more filmmakers exerted this kind of influence over the final product maybe physical media wouldn't be so moribund. As for the transfer, the glassy image is soft and diffuse--night scenes eschew deep blacks for a soothing palette of greys--but by no means lacking in fine or shadow detail. Her's Pottery Barn palette, often accented by Lucite pinks and oranges, has depth at least the equal of its range, and while there is incidental noise now and again (such as during the walk-up to the beach, before the overhead view floods the camera's sensors with daylight), the HD source is free of obvious digital artifacts, not to mention pleasingly filmic despite the absence of grain.

The 5.1 DTS-HD MA track reproduces a sleek, warm, subtly immersive sound design by the great Ren Klyce (Se7en), but I was grateful for the subtitles, because the more hushed voices, particularly Phoenix's when Theodore is reciting his letters, tend to dissipate in the picture's airy locations--the presumed price of authenticity. Extras begin with long-time Jonze documentarian Lance Bangs's "The Untitled Rick Howard Project" (24 mins., HD), the cryptic title of which appears to be what Her was called during production, according to slates glimpsed throughout. This is an abstract making-of alternating B-roll shot in a variety of media, watermarked outtakes (including one from a deleted scene between Phoenix and Amy Adams), and snatches of dialogue from the film that gives the impression of a tight-knit cast and crew there to serve Spike's vision. An endearing moment has Jonze learning that he's scheduled to shoot the pregnancy nudes and sex surrogate back-to-back. "That's a lot of friskiness for one night!" he says, blushing. What you won't see here is any footage of either Samantha Morton or her replacement, Scarlett Johansson, recording "Samantha," which suggests either an attempt to preserve the character's mystique or a way to avoid confronting the messy politics of recasting.

Bangs returns to the director's chair for "Her: Love in the Modern Age" (15 mins., HD). Co-presented by VICE, it documents viewer impressions from when Jonze began screening the film for personal acquaintances--a mix of creative types like Marc Maron, Bret Easton Ellis, and Charlyne Yi, though only one actual cast member (Olivia Wilde)--last fall. The piece captures all its subjects in the movie's melancholy afterglow, so even the most optimistic interviewees seem a little depressed as they philosophize about, as advertised, love and, eventually, technology's role in modern relationships. It taught me a new term, courtesy of filmmaker Evangeline Zhao: "twin flame," next to which a soulmate is a mere pile of garbage. Lastly, "How Do You Share Your Life with Someone" (4 mins., HD), untitled on screen, is a shorter mix tape of behind-the-scenes material and Her clips, featuring non-diegetic voiceover from the film. Every time the word "her" is uttered, it takes on extra-textual significance--this is one last look around before shutting off the lights and turning in the keys. Preferable to an EPK? I'd say. Winter's Tale's trailer cues up on startup; DVD and Ultraviolet copies of Her come bundled with the BD. 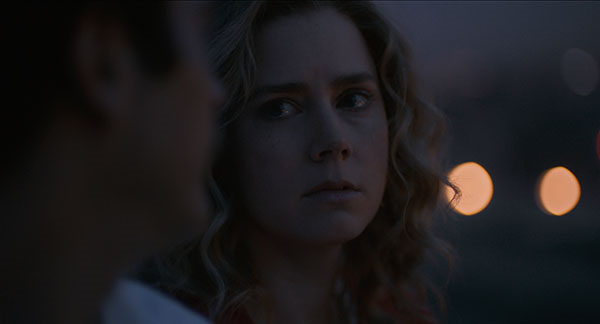