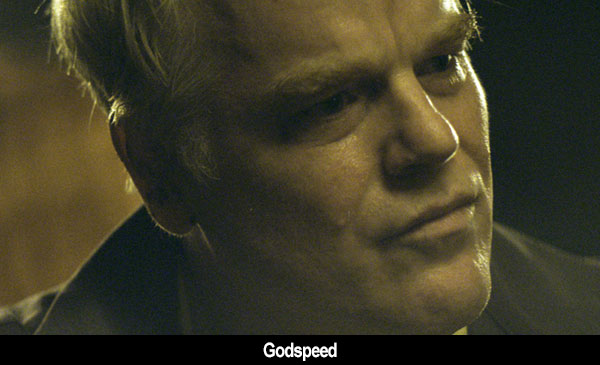 by Walter Chaw A few things become clear as John Slattery's God's Pocket unspools unsteadily in the titular, fictional Philadelphia slum: that it's perhaps as difficult to adapt Pete Dexter as it is Ray Bradbury, for many surprisingly similar reasons (like him, Dexter's power is in the rhythm and economy of his prose and the poetry of his characters' interior lives); that Philip Seymour Hoffman is irreplaceable and doomed to be remembered for too rarely finding roles worthy of him; and that young Caleb Landry Jones is consistently an astonishment and someone to follow. Indeed, the cast is mostly above reproach; the problems are all in the scripting and directorial decisions by first-timer Slattery that betray a certain indecisiveness in pruning repetitive sequences. It's not a matter of too much patience, but of too little interpretation. As is, it lands somewhere between the voices of Armistead Maupin and Michael Chabon, neither of whom are nearly as dangerous as Dexter, causing one to wonder if God's Pocket wants to be widely loved rather than admired at arm's length. It shouldn't be cuddly or adorable (and it isn't)--but it tries. What's left is another exceptional Hoffman turn wrapped in layers of undifferentiated bland. Maybe it seems that way so often because Hoffman was so difficult to match.

Hoffman is small-time schlub Mickey Scarpato: loser, scraper, driver of a refrigerated meat truck, and sometime-participant in petty larcenies with his buddy Bird Capezio (John Turturro). He's married to fading bombshell Jeanie (Slattery's "Mad Men" co-star Christina Hendricks) and father to full-blown sociopath Leon (Caleb Landry Jones), whose funeral forms the reason for and framing story of this little slice of psychodrama. Contextualizing it all in a folksy, alcoholic fog is columnist Richard Shellburn (Richard Jenkins), who offers up a tale of townies and outsiders, insular communities marked by ignorance and struggle, and all the false equivalences to nobility that implies. It's not clear, and arguably never clear, that Shellburn's purple musing is meant as ironic (though the film's ending makes it so), meaning the impact of the voiceover is painfully earnest. It points a finger to how God's Pocket is simultaneously overwritten and underdeveloped. Look especially to the margins, where minor characters like a stuttering witness (Jonathan Gordon) are whipped on and off the proscenium, made important then gone without a proper accounting. More nettling isn't that the movie is over-stuffed, but that it doesn't know what's interesting and thus keeps returning to its dive bars and domestic scenes. There's only so much local flavour that's necessary; there are only so many reminders needed that the community is closed-off and brutal.

Failing, then, as a local story and failing, too, as a metaphor for a larger dysfunction, God's Pocket becomes an actor's workshop, with thesps of varying ability and appeal testing their Methods against one another. Hoffman is a revelation. Lost in hagiographies about his approach is just his presence and physicality. He looms in this film, bullies quietly, mourns internally. The last shot of him would be a nice cap on a career, as would Mickey's final, futile defense for a character totally undeserving of it. Turturro is muted against Hoffman's charisma, as is Jenkins, who's stalled playing this kind of exhausted career-man with near-identical turns in Burn After Reading, Cabin in the Woods, Killing Them Softly, now God's Pocket. Hendricks is better than expected, although the bulk of her task is looking pained and long-suffering. With only about five minutes of screentime, it's Jones who steals the show. By turns terrifying and pathetic, his Leon is a marvel constructed from an economy of motion and characterization. I've liked him in everything I've seen him in; I hope to see more of him. Had God's Pocket focused on the relationship between Leon and his dad and pushed everything else to the periphery, had it made the inevitable collapse of their illusions and identity the microcosm of the larger concern, well, then you'd have something. As it stands, the picture is pastiche verging on cliché: self-concerned and solipsistic, and, as such, instantly forgettable.