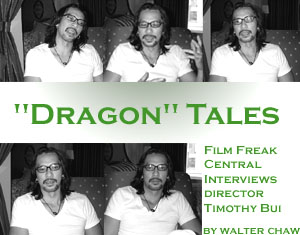 May 31, 2002|With brother Tony at the helm, Timothy Linh Bui debuted in 1999 as co-writer of the beautiful, if slightly meandering, Three Seasons, the first American film to be shot entirely in Vietnam and a rare film about Vietnam to portray the beauty of the country and the people rather than the ugliness of what is known there as the "American War." Highly acclaimed, Three Seasons was also the first film to score the hat trick of Grand Jury, Audience, and Cinematography prizes at the Sundance Festival. The Bui brothers' follow-up picture is Green Dragon, this time with Tim directing (from a screenplay that he and Tony wrote). Set in Camp Pendleton at the end of the war, Green Dragon details in anthology-fashion the travails of thousands of South Vietnamese refugees awaiting sponsorship to enter the United States. Unfortunately, the film succumbs to the kind of maudlin predictability and manufactured "big" moments that Three Seasons largely avoided. Green Dragon is, however, beautiful to look at, featuring a performance from veteran Vietnamese actor Don Duong extremely naturalistic and effective and another from Hiep Thi Le that bristles with feral sensuality.

Tim Bui is a slight man, a graduate of Southern California's Columbia Film School who found his love of cinema through thousands of films at his parents' video store and an early screening of another immigrant product: Milos Forman's Amadeus. When I met Mr. Bui, it was in the funky fusion lobby of Denver's Hotel Monaco; he was dressed casually in white shirt and pants, running a little late, with the kind of demeanour that I recognized from my own status as minority in the United States: friendly, but wary. He studiously avoids political questions (an admirable Asian reticence unfortunately reflected in Green Dragon), deflecting them with a diplomat's practiced charm so that the only real overriding truth one divines from spending time with Mr. Bui is his passionate love for his rediscovered homeland. In a cinematic landscape littered with images of murderous, conniving, largely indistinguishable "gook" archetypes, maybe the perspective offered by that love is enough.

After relating a little of my own recollections as a member of the 1% minority presence in the setting of my own child-of-immigrants experience, Mr. Bui shared a little of his.

Bui on growing up:
Growing up for us in Sunnyvale, California there weren't many Vietnamese and the few Asians that were there were Filipino. We were stuck with the stigma of the Vietnam War from films like Rambo, Missing In Action, and the like--the "gooks"--the faceless men shooting from the jungle. There was always something bad about it. We were ashamed of our heritage and living in a place with a lot of Filipinos--we would tell people when they asked, "Oh yeah, we're Filipino." Just because of what we thought the public perceived the Vietnamese to be. It wasn't until we were older that we began to understand and embrace our heritage--an awakening that was really completed when we returned to Vietnam in the Nineties. Three Seasons and Green Dragon gave me an opportunity to go back, rediscover where I was born, and trace the journey of my parents in coming to America.

A public exploration the type of which only Asians of our generation seem willing or capable.
Correct. The older generation is far more unlikely to speak of these things. These films were very difficult to make for a different reason as well--their subject matter made finding funding very hard. I'm very proud of these films for that hardship--but really more so for how they forced me to improve my Vietnamese and an understanding of my own culture. Even more than that, the experience of these films allowed me to embrace my culture. Of that, I'm very proud.

Asians in general have had it very rough in American cinema--my childhood was tortured by the kind of portrayals thrown out in stuff like Indiana Jones and the Temple of Doom, The Goonies, and Sixteen Candles.
A good friend of mine recently found a manager and the guy probably meant well, but he came to my friend and said, "You know how I'm going to market you? I'm going to market you like [Sixteen Candles'] Long Duk Dong."

Which is sort of the equivalent of telling a black actor that you're going to market him like Stepin Fetchit or Jar Jar Binks.
Right, right--we still face those issues but every year I see more films reflecting an Asian point of view and I hope that points to better things for us.

Do you find lingering traces of that kind of racism hindering your efforts to find funding?
I don't think it was racism so much as a business situation. Americans just don't finance foreign-language films. They would ask us if we could do it in English, or if we could have a recognizable Asian star like Joan Chen--those were the kinds of things they confronted us with. They'll distribute foreign language films here, but they won't put up money up front for them. We eventually got financed mainly because they were small projects and proportionately smaller risks.

Your next projects are "Leaving Earth" and "Saharan."
Leaving Earth is a screenplay my brother and I wrote that we're setting up for Tony to direct. It's based on a novel by Helen Humphries about two female co-pilots during the depression of the 1930's trying to break an endurance record circling the Toronto harbour. It's a beautiful work--it shows life from the air and all that beauty and freedom, and life from the earth and the sadness of the depression. Saharan is my next directorial project--these two films both represent departures from the Vietnamese concerns of our first two films. Saharan is about four characters in desperate search for miracles and love in Los Angeles. LA is a big city, but it's very lonely there.

What convinced you to go with Patrick Swayze for Green Dragon?
It was meeting him. My hesitation was in the fact that he's a Hollywood name and I was afraid he'd overshadow the film. But after meeting with him, I immediately knew that he was the man because he has this complete understanding and humanity towards the character. A side of him that I never would have guessed just watching his other movies.

Did you have the same reservations with Harvey Keitel (for Three Seasons)?
Harvey was a little different because Harvey, any way you look at it, is still more of an independent actor in more independent films. The overshadowing part that I was worried about with Patrick was more for his "star" stigma. With Harvey, we just sent him the script and he read it and wanted to do it.

Tell me about your mother and the moonlight.
When my mother first came to this country, she told a story of how the moonlight brought her a lot of sorrow. She feared it, she couldn't look at it because it represented for her the pain of the loss of country. She came without her family, they couldn't make it out during the first wave in 1975--but when I was young, I couldn't understand what she meant about the moonlight reminding her of that sorrow. It took time for me to understand how that was one thing she could think of while separated from her family--that when she looked at the moon, maybe a loved one was looking at the moon at the same time. Only as I got older, sometime after Three Seasons in fact, did we really feel ready to tell her story--and the moon and the moonlight was the trigger and the inspiration for Green Dragon.

How did you research your screenplay?
I got as much as I could from my mother, then I went to Camp Pendleton and looked through their photographic archives. Thousands and thousands of photographs and for each of them I could imagine a scene or a scenario and a few of those evolved into the screenplay.

A bulletin board of photographs is a central image in your film--it serves as a metaphoric signpost?
Correct--and the last shot of the film is a photograph, too--that archive was so evocative for me and for the film emotionally. From there I met with refugees who went through the camps--friends of friends of friends, this long chain of stories, and from all the stories we discerned certain universal themes and distilled Green Dragon's stories from them.

Following with the idea of images informing Green Dragon, one of Forest Whitaker's artist character's sketches shows a black man with whip scars on his back. Is this sort of an oblique reference to the kind of racism facing these refugees in the United States?
Exactly. There was a line he tells Minh (young newcomer Trung Hieu Nguyen -Ed.): "There's an America out there that you have yet to understand--something beyond your Mighty Mouse."

Your film stays very apolitical--what are your feelings about America at the end of the war?
Well, I was only five when I came to the United States so I knew nothing at the time. What I tried to do--what I'm researching and discovering is that different people certainly felt different ways. There were some people glad that the South fell so that they could get away to America and there were those like my mother who felt betrayed by America. She felt that America was way too powerful after their investment of money, time, and men to just one day get up and leave. The day she heard the news of the fall she looked at an American soldier standing next to her and she wanted to kill him. So my aim was to mix all that into Green Dragon--to strike a balance between those two sides.

You feel no particular allegiance to either viewpoint?
When you go to Vietnam they call it the "American War," and when you visit the American War Museum (in Hanoi -Ed.) it's all turned around. It's all a matter of perspective. When I'm over there I understand where they're coming from and when I'm here, I understand the American perspective. I will say this, that the Vietnamese have moved on much more than the Americans have--they've been through so much strife and warfare that this conflict is a part of their past while it's still a very painful period to visit for the United States.