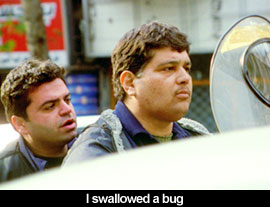 by Bill Chambers Those planning on taking in Roland Emmerich's The Day After Tomorrow this weekend solely to judge the credibility of its disaster-movie hijinks would be better off buying a ticket to its competition in several North American markets, Jafar Panahi's Crimson Gold (Talaye sorkh), in which a scenario of inevitable, cyclical doom unfolds with astonishing veracity. The shooting of a jewellery-store owner by a thief who turned the gun on himself inspired master filmmaker Abbas Kiarostami to reverse-engineer the thief's motives in a screenplay written specifically for his former assistant director Panahi, fresh from the bittersweet triumph of The Circle. (Widely acclaimed everywhere, it was banned in his native Iran.) Some details specific to Iran's theocracy notwithstanding (a party is raided by police because men and women are dancing together), Crimson Gold is arguably a more globally inclusive film than The Circle, as it deals with the insidious threat of classism that on some level affects us all.

Iran-Iraq war veteran Hussein (real-life schizophrenia sufferer Hussein Emadeddin, a Gary Farmer type) is a pizza deliveryman engaged to the sister (Azita Rayeji) of close pal Ali (Kamyar Sheissi). Their friendship has an Of Mice and Men dynamic, albeit one physically inverted, with Hussein a gentle, stoic giant ("It's the cortizone") and Ali a hyperactive innocent who sets off a chain of events by showing Hussein a lost handbag containing a broken wedding ring and a receipt for an exorbitantly-priced necklace. The pair decides to "see what 75 million looks like," but the Tehran jeweller (Shahram Vaziri) refuses them entrance into his upscale establishment, a humiliation that sensitizes Hussein to inequality among the masses. Appearances, in fact, play a canny role at the outset in our assumption that Ali is going to take centre stage, simply because Sheissi is closer to a matinee idol than Emadeddin.

Admittedly a dilettante when it comes to Iranian cinema, I'm not sure how much I'm imposing on Panahi when "recognizing" allusions to other films in Crimson Gold--but in the sense that a consideration of hypothetical muses deepens my appreciation of it, I don't see the harm in citing them. Nanni Moretti's similarly episodic Dear Diary (Caro diario), with which this picture shares a protagonist who spends an inordinate amount of screen-time riding a Vespa scooter, has never looked like happier horseshit (playing himself, Moretti bemoans the state of world cinema as too concentrated in the horror realm--choosing the hardly disreputable Henry: Portrait of a Serial Killer as his punching bag--and suffers an impediment best described as privileged (a rash)), while a haunted passage featuring Hussein in his grimy digs brilliantly subverts a Taviani Brothers signature that will also be familiar to fans of John Sayles's Lone Star. As Hussein settles in for a daytime nap, Panahi pans to the window, beyond which it's night. Hostilities flare in the streets below, and as the camera reverses itself to betray Hussein's point of view, our first instinct is that we were seeing a war flashback. (Hussein is framed behind the windowpane like a projectionist in a booth.) But somehow it becomes clear that this is downtown living--that Hussein's misery is very much externalized.

The production design in the penultimate chapter invites comparisons to the vulgar way that Brian De Palma portrays opulence, particularly in Scarface and Bonfire of the Vanities. But the spiral staircase has served as pithy commentary on the caste system in many movies, a graphic illustration of the snaky route upwards to wealth, tentatively climbed here by Hussein after he delivers pizza to a penthouse apartment and is invited inside. The pad's occupant, a distracted and spoiled young banker played by Pourang Nakhayi (actually, that's my presumption about his occupation: successfully naturalistic films provoke almost territorial responses--Nakhayi's mannerisms reminded me of a friend's), tends to a phone call and other matters, empowering Hussein to explore. Critics like to invoke the cleansing moment in which he swan dives, fully-clothed, into the upstairs swimming pool, yet the most profound image involves a wall of water separating Hussein and his host, Hussein technically on the 'outside' of it. Obviously the banker can see through it to Hussein, but he's oblivious, and there you have it: the partition separating the rich from the poor--invisible but substantial.

Though comparisons to Taxi Driver are rampant, they are potentially misleading, since there is an undeniable stigma of violence attached to Taxi Driver that overrides the intent to equate the emotionally distant vets at the core of each film--a fairly glib thing to do in the first place, as Hussein is driven to the brink by class struggle while Travis Bickle is the apotheosis of romanticized vigilantism. Too, the aesthetic similarities between Crimson Gold and Taxi Driver are less than acute, although I was reminded of Bickle's interactions with the hollow sage Wizard (Peter Boyle) in a tense coffee-shop interlude where Hussein and Ali are lectured by an opinionated crook, if partly because the milieu is characterized as a refuge for pickpockets much like Taxi Driver's Belmore Cafeteria operated as a safe haven for cabbies. The crude truth is that Taxi Driver is a work of art while Crimson Gold is a work of poetry; the latter is an elegy of urban unrest where the former is passionately, but merely, an indictment of it. In fact, a lack of rhetoric is what ultimately distinguishes Crimson Gold from the social conscience pictures of the West (Panahi calls his style--accurately--"objective"). With a more verbal central character, it could've turned into a liberal screed, but Panahi and Kiarostami are too smart to risk cheapening their compassion, and the humility of the film's brooding makes it feel achingly human. Originally published: May 28, 2004.