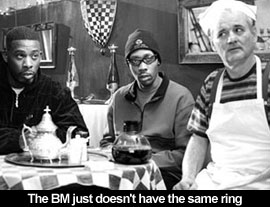 by Walter Chaw Philosopher-scientist Nikola Tesla (of coil fame) once suggested that the universe winding down vibrated to a sympathetic rhythm; art, at its best, puts a tuning fork to it. The words that we use to describe tapping that fricative synergy (archetype, the sublime, the ineffable) are also the words that we use, to borrow a phrase from Frank Zappa, to dance about architecture--to describe what's indescribable about the collective experience, the existential electricity that ranks music above painting above poetry above literature (and film the twentieth century stepchild that falls somehow north and south of each). It is the unique privilege of the cinema to be all things at its best and less than nothing at its worst: to be sculpture for Matthew Barney; photography for Stanley Kubrick; ad art for Roy Andersson; poetry for Jean-Luc Godard; hymn for Abbas Kiarostami; and music for Sergio Leone. For Jim Jarmusch, it's the Romanticist sensibility distilled deliriously through the Nouvelle Vague, while for Guy Maddin, it's perhaps the critical instinct at its most self-loathing, arch, and unpleasant.

Tesla's coil makes an appearance in Jim Jarmusch's Coffee and Cigarettes in the one of the omnibus film's eleven short subjects that features neo-punk duo The White Stripes (a.k.a. Meg and Jack White)--also the middle of three vignettes that couple musicians together. (The first pairs Tom Waits with Iggy Pop, the last packages The Wu-Tang Clan's The GZA and The RZA with Bill Murray.) This unofficial trilogy provides the picture with music-informed way stations along its circuitous path to greater truths about the dicey nature of communication and the essential loneliness of a considered life. That musicians present the picture's rough evolution from uncomfortable misunderstanding (Waits/Pop) to acknowledgment of non-rational understanding (White/White) to an understanding that surpasses sense (GZA/RZA) takes on a fulsome timbre when considering the kind of extra-textual baggage that musicians carry with them. They deal, after all, in a currency more indescribable than film, so that when Jarmusch then deposits actors as themselves moonlighting as restaurant workers (Steve Buscemi, Murray, and Cinqué Lee in his second of two roles), sycophants (Alfred Molina, Cate Blanchett), or assholes (Steve Coogan, Blanchett opposite herself), his casting choices, like Quentin Tarantino's, clarify themselves as character and theme in and of themselves.

Of varying lengths, each of the eleven shorts shares a checkerboard pattern, a high-contrast black-and-white visual style, a conversation, coffee (tea for the Brits, espresso for the gits), and cigarettes--first establishing the trope as a game, then introducing a stimulant, a narcotic, and a series of non sequiturs to underscore the hallucinogenic, often malleable nature of existence. The line that separates the absurd from the transcendent in the day-to-day is gauzy at the best of times, and of all the things that Coffee and Cigarettes and Jarmusch do well, their ability to convey uncertainty with gentle observational humour and a kind of gathering, anthology eloquence comes to the fore. The picture reminds a great deal of the director's Mystery Train (and Buscemi offers a theory on The King shared by Don Coscarelli's Bubba Ho-Tep) and his early work as a shorts director (a few segments here originated as "Saturday Night Live" interstitials from the mid-Eighties), and though he's fond of deflecting gestalt reads of his films individually and collectively, make no mistake that there is a meticulous structure to Coffee and Cigarettes. The film is about interconnectivity, and it's about it without being an officious jerk about it--easier said than done.

Case in point, consider the wonderland films of Guy Maddin, which pay tribute to the greats of the silent and Depression-era cinema (a lost Von Stroheim talkie redux with The Hoyden; Lon Chaney's cinema of lovelorn deformity; Tod Browning's fascination with spectacle, sex, and mutilation (and, pointedly, the eventual double amputee played by Chaney in Browning's The Unknown); Eugene Illes's Alraune with Twilight of the Ice Nymphs) while dealing proximately with the texture of film and its attendant quality of forgetfulness. Maddin seems to be talking about the ephemeral nature of this medium, but rather than the traditionalist that Jonathan Rosenbaum identifies him as, I'd offer that Maddin, by pummelling his images through the filter of the erosion that time and projection have wrought on his sources, is more the nihilistic post-modernist. Maddin isn't recreating a picture shot in the 1930s, he's simulating a modern viewer's experience of a picture shot in the 1930s: not acolyte methodology, then, but something like an ironic idolatry. He is more the commentator than the creator, and his act of criticism carries with it condescension for both his audience and for the films his audience presumes he admires. Ultimately, his pictures carry with them the taint of the duality of mocking the very thing to which one aspires, as well as the astringent whiff of superiority attendant to the dialectical distress his sort of confusion inspires.

Taken a different way, Maddin's films might be seen as experiential in the truest spirit of the word: senseless and sensual in equal draught. When they work, they work by bedazzling in the fashion of the world's most elaborate, and certainly most expensive, crank nickelodeon. The Saddest Music in the World is Guy Maddin at his most transparent--it's a brilliant bauble of a film that occasionally amuses as it skates along the surface of broad sociology and pervasive Canuck self-hatred by cribbing grand flourishes from grand films that Maddin doesn't rescue from so much as revel in their obscurity. Where Tarantino will recreate the actual texture of the film that he repositions, Maddin recreates the dupes and bastard formats that represent the films that he harvests. One represents the true fana, the other--archly--the ravages of time and tide.

Gifted for the first time in his career with a budget in excess of two-million dollars, Maddin enlists the aid of Isabella Rossellini (David Lynch heroine in Blue Velvet, cunningly cast in a picture that emulates that director's Eraserhead), "Kids in the Hall" vet Mark McKinney, and Bruce Willis's girlfriend from Pulp Fiction, Maria de Medeiros, for The Saddest Music in the World, whose characters are engaged in a global contest to quantify the unquantifiable. A series of Gong Show vignettes offend Tesla's idea of universal resonance, discussing in an abrasive way the means by which a capitalist society will seek to turn the most precious, ephemeral rituals of indigenous culture into cheap commodities. (The bumper sale of Bob Siemen Designs' pewter nail pendants in conjunction with The Passion of the Christ bears out Maddin's disgust with mass consumerism and the commodification of the sacred.) A pair of unctuous play-by-play commentators discuss the culture-vs.-culture confrontations, reducing the Africans' solemn self-mutilation and a Canadian captain's (David Fox) sad tribute to professional sports spectacle; meanwhile, mistress of ceremonies Lady Port-Huntly (Rossellini) buzzes to indicate change of turn, offering a Caesarean thumbs up or down.

What fascinates about Maddin is the extent to which his films inspire conversations about representation in the cinema. The Saddest Music in the World functions for all intents and purposes like a painstakingly constructed documentary about the modern academic study of silent and Depression-era film. Like the best documentaries, it ultimately sheds more light on the question of sign and signifier than any glimpse of the subject itself--a feat that Jarmusch accomplishes with considerably less sarcasm. Love him or despise him, though, Maddin is an auteur in a true sense who, in less than a decade of feature-filmmaking, has created a small library of controversial, maddening, seething films that function best when read as intellectual, almost sterile, interpretations of febrile, uncontrollable emotionality. (In this they share a lot with the films of countrymen Atom Egoyan, Denys Arcand, and David Cronenberg.) Maddin's debts to Kenneth Anger and Stan Brakhage, then, take on something like a harmonic antipathy: though all work better in theory, only Maddin is removed from the process of creation--he's more archivist than artist. When The Saddest Music in the World ends in an inferno inspired by spilt beer (Maddin engulfing his voracious anti-heroes in an Icarean conflagration), the piece's sole stroke of honesty, it reveals Maddin frustrated and self-immolating, forced to toil in a medium he sees only the death of and for an audience he disdains. He is Douglas Adams's God disproving himself and vanishing in a cloud of reason. Fine as apocalyptic theology goes, but curiously toothless as a howl. Originally published: May 21, 2004.