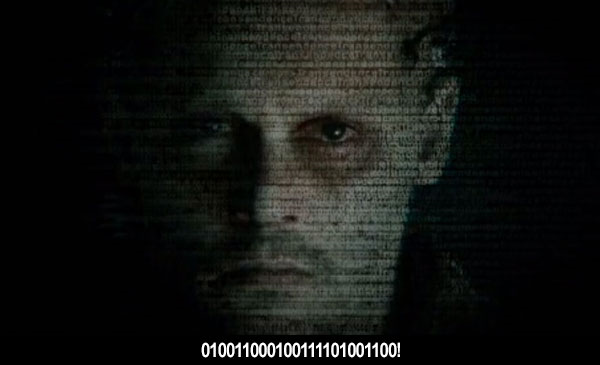 by Angelo Muredda If his name wasn't already plastered over the ads for the nerd bona fides the studio hopes it will signal, you'd still know that Transcendence was the work of Wally Pfister from an inimitably-portentous opening shot featuring the long, steady fall of a raindrop: as meaningless a totem as Inception's ever-spinning (or is it wobbling?) top. Having lensed all but one of Christopher Nolan's joyless epics, including that "Twilight Zone" episode told with Miltonic gravitas, Pfister has at last graduated to making his own Nolan film about serious men making serious moral choices in the name of serious ideas--here, sending the first human consciousness up into the cloud to fuse with an artificially-intelligent program, the better to meddle in the affairs of mortals. The Pfister-Nolan collaboration was a fruitful one, the equivalent of a hammer repeatedly meeting its companion gong, but watching the alternately soapy and chilly Transcendence, one can't help but feel the cinematographer-turned-director would have been better served by a more conspicuous departure, a project that better indulged his more melodramatic instincts.

Johnny Depp plays the appropriately named Will Caster, a computer genius and science celebrity whose current research, bankrolled by the well-heeled friends of work and life partner Evelyn (Rebecca Hall), aims to create the first humanoid A.I., a sentient machine whose combined robot brain and human tenderness just might unlock the cure for everything from cancer to dementia. Though the project is tentatively backed by old friend Max (Paul Bettany), a Nick Carraway figure who sadly narrates the ballad of Will and Evelyn for us from a few years' distance, it has an enemy in self-professed "neo-Luddite radical" Bree (Kate Mara, fittingly introduced as Depp waxes on the dangers of putting a human face on a robot's consciousness). Using a suicidal puppet with an "unplug" tattoo as her trigger man, Bree offs Will mid-tech conference with, of all things, a radiation-laced bullet--the assassin's equivalent of a two-step password. And so the Casters' research days in their makeshift warehouse are numbered as Will wastes away, Louis Slotin-like, until Evelyn and Max get the crazy idea to upload him to the virtual great beyond, where he becomes a new being--equally affectless, but more enterprising and all-seeing...and considerably faster at buying plane tickets on his wife's iPad.

Is the new, digitally-cast Will the same fusty old scientist at heart, or is Max right to be skeptical when his binary-translated bosom buddy's first coherent words are "Connect me to Wall Street"? That's the question Transcendence gamely seeks to answer before juggling it with a host of more baffling ones, like, Should the FBI bomb on principle a newly-founded tech mecca and private clinic in the ghost town of Brightwood?, and Would the disabled trade their subjectivity and free will for a new set of eyes, legs, et cetera. and a chance to till Will's desert Eden? For Will, you see, implores Evelyn to invest their project's venture capital into the depressed Brightwood, that they might build from scratch a nanotechnology-infused utopia whose day-to-day enterprises are to be run by the sick and economically disenfranchised, turned supermen with one magic breath of technological fairy dust. (The walking-wounded locals will deal with their new overlord, Will correctly figures, once his advanced prosthetics and laser eye surgeries make their wheelchairs, canes, and seeing-eye dogs an afterthought.) Sci-fi tends to be as good as the questions it asks, and lacking any meaty ones beyond the central conceit of whether a digitized man can still call himself one, Pfister and screenwriter Jack Taglen simply raise new ones along the way, piling up a series of unanswered queries finally set aside in one vague swooping gesture for a crypto-religious allegory about how much trust we're willing to place in our deities' good intentions.

The answer for Transcendence, it seems, is quite a lot, especially if our new Internet god is a libertarian dreamweaver who operates best at his most cryptic and unaccountable, far from the regulatory practices of any earthbound government. Here that's accounted for by Cillian Murphy's useless bureaucrat, who for some reason spends the climax parked on a rooftop, launching rockets at satellites with information science professor Morgan Freeman by his side, crying "no" in Freeman's usual dignified tones. It's in this thunderously stupid over-plotting that Transcendence most clearly resembles the Nolan brothers' signature preference for more over deeper, last seen in the woefully busy third act of The Dark Knight Rises, which trades its earlier Occupy sympathies in a single, alarming overhead shot of uniformed police officers charging the dark urban masses. Why stake your claim to one interesting idea when you can feign interest in all sorts of ideologically inconsistent ones?

That failure of nerve is a shame, because in all the swooning close-ups of the Casters' spinning records during their early domestic reverie, and in all the eerie tableaux of Will 2.0 hovering over his wife's bed, smiling placidly on several reflective screens as he remotely measures her blood pressure, one senses that Pfister would rather be making his own modest riff on David Cronenberg's romantic melodrama The Fly. That film, we might remember, was another haunted love story about a scientist who turned himself into something biologically incompatible with the world and his less-than-faithful partner, who, however much she loved him, could not quite bring herself to drink deep and taste the plasma spring. Single-tear champ Hall suffers beautifully as she does her best Geena Davis impression, but there's nothing of Jeff Goldblum's soulful wonder at his changed state in Depp's blank performance--flat enough before the reveal that there might be more of the old Will in his digitized form than we thought. Therein lies the central contradiction of Pfister's staggeringly dumb but not uninteresting debut feature, which tries to bring the maximalist intensity of his work with Nolan--best channelled in evocative full-scale images of pre-transcendent Will's workspace, an insectoid mess of cables and stacked chairs--to what ought to be a chamber piece.