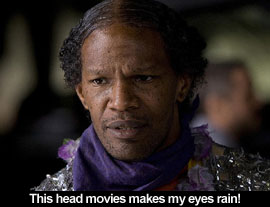 by Walter Chaw Black, crazy, homeless, and a prodigy--it's A Beautiful Mind and Searching for Bobby Fischer and The Fisher King and The Green Mile all wrapped up in a tight little Oscar ball. And The Soloist is a true story, of course, from LA TIMES columnist Steve Lopez's affecting series on homeless guy Nathaniel Ayers, which he turned into a book that's been adapted into a movie scripted by seasoned middlebrow emotional rapist Susannah Grant and directed by rapidly-developing first-class hired-hack Joe Wright. A problem, you'll agree, that it was pushed by its own studio out of the catbird seat late last year to make room for, of all things, that non-starter Revolutionary Road. The issue--arguably the only issue--of exploitation is raised, and well, in the film's most honest scene: at an awards banquet feting Lopez (Robert Downey Jr.) for his profile of Nathaniel (Jaime Foxx), the former's editor/ex-wife Mary (Catherine Keener) excoriates Lopez for his reluctance to fully engage what had at that point become his near-total responsibility. If that central issue of the picture lies fallow until an ill-fated recital (set up by ill-used, slapstick laughing-stock Christian cellist Graham Claydon (Tom Hollander)) ends with a few wild swings of a nail-studded bat, at least it's introduced as an elephant in a room full of people in that darkened theatre clucking at how adorable and somehow inspirational it is that a hobo is a world-class cellist.

Fault the picture, though, not for suggesting that ex-Julliard cellist Nathaniel is cured by his friendship with a white guy, but for spending a lot of time suggesting that everyone should befriend a homeless lunatic in a mad, desperate, liberal palsy of Recessionary guilt. "Madness, redemption, and the mysterious power of music" is how this story was presented in the catchphrase précis intro to a recent "60 Minutes" piece that is in its way no more nor less appalling than The Soloist (listen to how Morley Safer manipulates the interview towards uplifting soundbite)--and it's that single line that Grant appears to have taken as the entire backbone of her adaptation. The cruel irony of it is that it's this exact brand of facile, televisual homogenization of human pain into "Bart's People" human interest that has led to the critical, mortal state of publications like the LA TIMES. But do credit the "60 Minutes" segment for showing how the members of the Los Angeles Philharmonic (to which Ayers is now a familiar rehearsal-time visitor) took to playing with Ayers out of respect for his ability and not condescension to his disability.

You'll forgive me for noticing that the "normals" in The Soloist come off looking like elitist assholes with serial agendas while the homeless are filled with grace and the black guy who runs the shelter is beatified. It's not that far removed in this paternalistic regard from stuff like Blood Diamond and The Last King of Scotland. Cards on the table, if this thing were set during the Holocaust or in Mumbai, it would've seen release as scheduled and given Slumdog Millionaire a real run for its money. (In another decade, it'd be one of Alan Parker's condescending cross-the-pond broadsides.) Admittedly, it would have been interesting to have that inevitable conversation debating which is the greater evil: casting real residents of Mumbai slums to be filler for an uplifting fairytale about winning the lotto--or casting real homeless people in Los Angeles to act as filler for a feature-length Public Service Announcement about the importance of befriending that guy making racecars out of his poop behind the Loaf-n-Jug.

What saves the film from complete starry-eyed, faux-prestigious, doggerel pap is the story that's unfolding in the margins. Look beyond the melodrama for several scenes depicting the economic realities of running a major newspaper in the last years of this decade. We get meetings where writers lose their jobs (intercut with a whimsical interlude wherein Ayer's adorable affliction causes Lopez to help his sticky buddy run a shopping cart full of crap to the Walt Disney Concert Hall) and images of people pushing their cubicle trappings as they're "walked Spanish" (as Joshua Ferris would refer to getting laid-off) to the elevators. Downey Jr. is also remarkably good, as he is more often than not, though Foxx, in full stunt-mode, validates that old apocryphal tale about how MGM production chief Dore Schary tricked Spencer Tracy into playing a one-handed vet in Bad Day at Black Rock. ("No actor can resist playing a cripple.") What I thought of most was Downey Jr.'s character in Tropic Thunder advising that the best way to Oscar glory is to avoid going "full-retard" while noting that Foxx's stream-of-consciousness channelling of Ayers is firmly within the realm of the Rain Man/"savant" exception to the awards-mantle rule. (A smart guy, Downey Jr. must have had this project running through his mind as he was saying those words.) I don't know the best way to judge Foxx's performance except to offer that I, at no time, was able to forget that I was watching a performance. Wright doesn't trust Foxx's work, either, layering on visual and aural tricks in a sad, Ron Howard-ian attempt to visualize paranoid schizophrenia via lightshows and grandstanding instead of just letting Foxx try to put something together from the quirks and thousand-yard stares. You can't dance about architecture, but it doesn't stop Wright from trying.

The Soloist is the sort of film that doesn't really have an audience if it's not a festival, awards-season audience, bear-baited into lunacy by the promise that their ill-defined prejudices will be soothed and their collegial bumper-sticker philosophies massaged. Dropped into a late-spring Twilight Zone release, its pretension and overweening self-importance are obvious anchors rather than points in its favour. It's one thing to try to illustrate the power of music by ripping off that expressionistic colour-explosion representation of flavour from Ratatouille, another thing--and a terrible thing--to give us backstory as an extended, sepia-toned Ray-flashback to young Ayers growing up and practicing the cello on the mean streets of Cleveland. It's bullshit of the first magnitude, of course. Consider the moment where Ayers plays his instrument again for the first time in decades and then, on the soundtrack, a full orchestra swells in accompaniment while a couple of fucking squabs fly high above the tangle of LA freeways in a noble, disease-ridden tango. It'd be a satire of high-aiming, low-achieving drivel like this if it weren't so unmistakably devoid of self-knowledge and intelligence. Blame Grant and her absolute, proven inability in crap like Catch and Release, Erin Brockovich, 28 Days, and Ever After to ever make a controversial statement or force an ambiguous resolution. And blame Wright for already squandering his saucy Pride & Prejudice on tame adaptations of Atonement and now The Soloist. When the movie ends with a statistic that there are 90 kazillion homeless people living in Los Angeles, the implication is clear: why aren't you doing something? Like making a bad movie about the one homeless guy who dropped out of Julliard, for instance. It's true that Lopez can't cure what ails Ayers--but it sure seems like Grant and Wright have the answer for what ails us. Originally published: April 24, 2009.