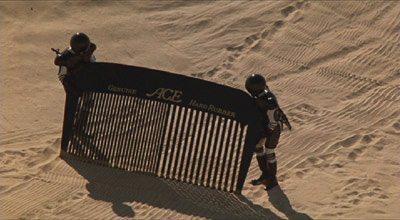 by Bill Chambers Neither the audacity of Mel Brooks's perpetually relevant Blazing Saddles nor the movie-love that manifested itself in his uncanny genre parodies Young Frankenstein and High Anxiety inhabit Brooks's Spaceballs, a spoof tailored to the undiscriminating palate of preteens and people who can't resist a joke at the expense of Star Wars hobbyists. It is, in other words, Brooks's very own Return of the Jedi, and although it's being reissued in a Collector's Edition DVD to capitalize on the release of Star Wars: Episode III - Revenge of the Sith, it's not really in a position to take the piss out of the new Star Wars trilogy. In fact, the most interesting thing about Spaceballs circa 2005 is that what was once spectacularly stale--by the time it came out, the first wave of Star Wars mania had passed--now elicits nostalgia for a Star Wars saga that was so classical and (visually / narratively / allegorically) uncluttered as to lend itself to burlesque. Because nothing in the current "episodes" has a prayer of becoming an institution, a contemporary Spaceballs would just be a succession of insults--you can't mock Jar Jar Binks with any affection.

Of course, it often isn't clear whether Brooks has actually seen a Star Wars film or is relying on images he absorbed through cultural osmosis. There is, for instance, technically no Luke Skywalker figure (though the Han Solo proxy, Lone Star (Bill Pullman), inherits some of his traits), while Princess Leia is caricatured as a spoiled brat, thus subjecting to ridicule the "princess" instead of the "Leia" aspect of her identity. (We might interpret the former as comment on the shift in popular allegiance to Han as Luke went from human to superhuman if not for the latter.) And though an Alien gag is priceless, recapturing a little of the dada sensibility that gives Brooks's early work its immediacy*, it, like references to the "Star Trek" transporter and the money shot of Planet of the Apes, presumes to lump Star Wars in with hard(er) sci-fi, which seems a rather philistine thing to do. Then again, the simplicity of Spaceballs' design, from its economical plot to its archetypal iconography to its spartan sets, is suitably evocative of the least reproducible thing about Star Wars, or anything alchemical: its tone.

Brooks's Achilles Heel as a satirist--though remarkably, it hadn't hindered him much until he jumped the shark with Spaceballs--is that he's blissfully ignorant of the zeitgeist. Yes, Young Frankenstein is a masterpiece, but who does a send-up of Universal monster movies in 1974? Or silent movies in 1976? The scatological humour is the only thing in Spaceballs with currency--that, plus extended riffs on the merchandising ploy of contemporary blockbusters (what does CGI allow Lucas but to increase the toy quotient by generating nameless aliens in multiple?) and the shrinking theatrical-to-home video window. A scene where villain Dark Helmet (Rick Moranis) rents Spaceballs before it's finished feels downright prescient, even with the kitschy presence of VHS tapes.

Spaceballs is basically the Jewish vaudeville version of Star Wars, all Yiddish homonyms ("Use the Schwartz," "Funny, she doesn't look Druish") and repartee of little comic value beyond exploiting the sexually-repressed costumes and hypothetically anachronistic Brooklyn accents. Perhaps the clearest indicator of the film's irrelevance and/or indictment of its juvenility is that Brooks sent the litigious George Lucas a copy of the screenplay before shooting began...and Lucas didn't object to a word of it.

Find on the second platter the bulk of supplementary material, starting with Wholly Cow's "Spaceballs: The Documentary" (30 mins.), a retrospective making-of that opens, in a homage once removed, with scrolling prologue script ("Mel Brooks was born, and this man begat this and begat that, and then some..."). Virtually every key player save Moranis (he was busy?) and the late John Candy is interviewed, with the above-the-line talent almost unanimously mystified by the movie's following. As a hagiography for Brooks, it's promisingly passive-aggressive (he's portrayed as a teddy bear with a gargantuan ego), yet it touts when it should lament the overqualified crew of Spaceballs, including the production designer of Doctor Zhivago, Alfred Hitchcock's storyboard artist, ILM's Peter Donen, and still others. Meanwhile, in Greg Carson's "In Conversation with Mel Brooks & Thomas Meehan" (20 mins.), Brooks strolls down memory lane with Meehan, his co-writer on the film. Though Brooks's spotlight-glomming Hyde personality takes centre stage, the two broach a variety of interesting topics, such as how the advent of on-set video playback impacted the way that comedies are directed.

For their profile "John Candy: Comic Spirit" (10 mins.), Wholly Cow was unfortunately limited to excerpting from the actor's MGM output. Something tells me that Candy wouldn't want to be remembered for Canadian Bacon, Once Upon a Crime, Delirious, or Spaceballs, for that matter, and while it's always nice to hear from biographer Martin Knelman (as outspoken here as he has been elsewhere in holding Wagons East accountable for Candy's death), the absence of Candy's favourite collaborator John Hughes is deafening. Rounding out Disc 2: a trio of step-frame galleries; six annotated film flubs, Speak & Spell-style "spacequotes," and a trivia quiz (together constituting a section of "fun & games"); Spaceballs' theatrical and exhibitor trailers and a promo for MGM's laffer line; and a 7-minute, split-screen "Storyboard to Film Comparison." Three separate menu interfaces--Lone Star's Winnebago, Vespa's Mercedes, and Dark Helmet's ship--each lead to the same batch of extras, albeit unique Easter eggs. An embossed cardboard sleeve slips over the swingtray keepcase. Originally published: April 25, 2005.

THE BLU-RAY DISC
MGM brings Spaceballs to Blu-ray in a straight port of their 2005 Collector's Edition DVD--which has actually been reconfigured as a flipper and bundled with this disc. Anyway, the 1.85:1, 1080p presentation is a marginal upgrade, with the studio seeming to have gone the extra mile by cleaning up the pinholes that plague the image in standard-def. Curiously, the film is more transparently dated in HiDef, though it still looks remarkably fresh, suffering only from mild crush and a certain ground-in appearance to the grain. To give you an idea of how improved the fine detail and colours are, for the first time I can recall, Pizza the Hutt genuinely grossed me out. (He's closer to organic vomit than to the plastic stuff here.) The 5.1 DTS-HD Master Audio is likewise superior to the previously-available DTS track, sounding cleaner, fuller, and generally worthier of not just the two credited sound designers, Randy Thom and Gary Rydstrom (talk about your historic pairings!), but also the genre being parodied. Returning in SD are all of the video-based supplements, although the "spacequotes," trivia quiz, and novelty mixes are AWOL. Originally published: June 29, 2009.

*How much do you want to bet that Spaceballs is six-degrees responsible for Warner's decision to make Michigan J. Frog the mascot of the WB network? return