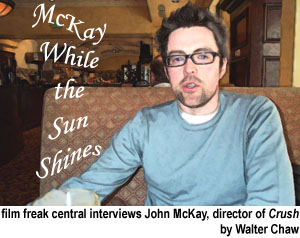 April 19, 2002|With a background in BBC television as well as two well-regarded short features under his belt (Doom and Gloom (1996) and Wet and Dry (1997)), John McKay's uneven and somewhat inauspicious feature-length debut Crush has garnered a slew of bad reviews until the only reviewers that really matter to most of North America, Ebert and Roeper, chimed in with their golden digits upraised. Yet the problems of the film remain unsolved by that increasingly devalued ascription of merit: what begins as something along the lines of Four Weddings and a Funeral takes a funereal turn into punitive plot twists and a general misanthropy at its conclusion. The tonal shift is one thing, the eleventh-hour attempt to gloss over what's happened as something forgivable and perversely light-hearted is another altogether.

FILM FREAK CENTRAL sat down with the very pleasant writer/director/Hugh Grant look-alike John McKay to discuss the role of criticism in a filmmaker's life while taking a look at the choices made in casting, direction, and writing a feature film, particularly his Crush.

Did you worry from the start that presenting the fear and desperation of these women as humorous might ring a jarring or discordant chord?
Well, I think they go hand in hand because it's funny when people get desperate. I like comedy and my background is in television comedy, but I like drama and tragedy--weepies--and it seems entirely logical to me that you should have a movie with comedy, even knockabout comedy, that has a tragic or sad side as well. I like jokes but I like to cry also.

Mel Brooks once said that tragedy was a hangnail and comedy was a man walking into a manhole and dying.
(laughing) Yes. I knew that there was always going to be a fine line to walk in this film. These three women [of Crush] are very successful but are lacking this one ingredient that, turning forty, they still haven't found that perfect partner. It's the desperate hours so there was always going to be an edge of sadness, loneliness, and desperation. But we discovered that these women, in the act of talking about it in their "Sad Fuckers' Club" (The film's working title. -Ed.), they find a lot of humour in their situation.

Why the change of your working title to Crush?
Although "The Sad Fuckers' Club" was sure to catch the eye of cynical metropolitan film exec types--encourage them to never push it to the bottom of the pile. By the time we made the movie and saw what we had, we saw it was a much softer, more romantic movie "women's picture" than that title would imply. So though all along I expected the hand of Big Brother to impose itself, in actual fact in the end we changed it ourselves because we realized the audience who would really love this film would have difficulty asking for ticket to something called "Sad Fuckers' Club."

Tell me about Henry Braham's cinematography; his interiors especially are lovely.
I was very lucky to work with Henry--he's very good, very painterly. I wanted to make a "brown" movie, brown/gold sort of movie, so we banned blue from the movie and decided to use widescreen even though it's an emotional picture, not Star Wars. I was interested in landscape, in evoking the beauty and the claustrophobia of the setting. Widescreen is also very good for emotion: when you shoot someone in the format you're more aware of their thoughts in the context of a wider visual. Images immediately become more decorative and abstract.

Tell me about writing women.
I spent a long time writing men as a playwright in my twenties in Scotland. I decided at one point that there was a whole section of the audience I wasn't writing for and I much prefer now writing women than writing men. I find that my women say and do things my men never would. I think as a writer you're always trying to fool yourself into being more revealing or more truthful and often that's choosing the right subject, but sometimes it's finding the right mouthpiece.

Why Andie MacDowell?
In terms of "Kate," I wanted someone who could convince that she'd been very good all her life. You had to understand that although she was very beautiful, she'd always neglected that family and romance element of herself. Andie occurred to us very quickly because she can portray that innocence and yet it would be very interesting to see her be naughty. 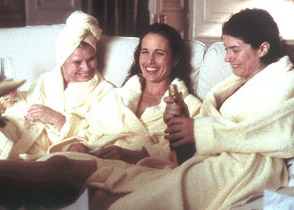 "...As a writer you're always trying to fool yourself into being more revealing or more truthful and often that's choosing the right subject, but sometimes it's finding the right mouthpiece."

How did you get Andie MacDowell and her young co-star Kenny Doughty comfortable with one another?
When I first met Andie MacDowell with my producer Lee [Thomas] it so happened that we went dancing and Andie taught us both to do the shag. We all had a big laugh about it because of course "shag" means something different in the UK: "Andie taught me to shag" and "I shagged with Andie all night." (laughs) I noticed that it's a little like Latin dance in that it's a close contact dance--a close physical conversation. It occurred to me that these two would do a lot of sex scenes together so in rehearsal I got Andie to teach Kenny how to do the shag. We'd begin every session with them with fifteen minutes of shagging. (laughs)

Did it help that your crew was predominantly female?
I always like to work with a crew that is at least fifty percent female. It seems unnatural to be in a world with a lot of women and then go to a set that is basically an all-boys club.

After Anna Chancellor's audition, she told you that her character was wrong and the screenplay was poorly written. How did you mollify her--what kind of modifications did you make to accommodate her?
I didn't make any modifications at all, I was just convinced that she was wrong. Anna eventually came around to my point of view. I did think it was interesting that she came in prepared to fight with us--my original vision for the character was very different, but after seeing Anna, I couldn't see it played any other way.

Tell me about the tonal shift in your film--how did you imagine it was going to play?
I was interested in youth and age--how are we young and when are we old? In our thirties and forties we start to realize that life isn't forever. That can be scary, thinking about death. So I suppose among other things it arose from a notion of doomed youth--that youth will end but the spirit of youthfulness can live on. Here are three women who think they have it pretty awful and I thought it would be interesting to show them what awful is.

You've gotten a lot of rough reviews from places as diverse as the NY and LA Times, Salon.com, and...us; what do you think the role of criticism is in filmmaking?
I would characterize the critical response in the U.S. as this: men are sniffy, women like the picture. Look at the "NY Times": last Sunday we got one of our best reviews from a female critic and then on Wednesday, we got a terrible one from a man. I've never seen such a clear gender divide--by and large the male critics seem to dislike the movie. As to what the role of criticism is, I feel as though critics are like the weather: sometimes you can't ignore it, but you can't live your life by it.