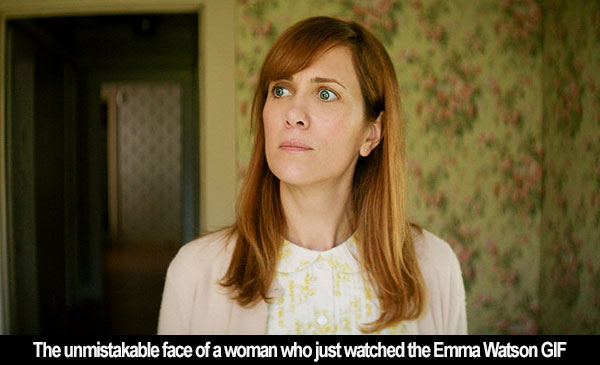 by Walter Chaw A knuckle-biting bounty of casting riches, Liza Johnson's twee, somewhat over-directed, generally overdone Hateship Loveship features dozens of lovely actorly moments that add up to not a whole lot, although the movie tries. Boy, does it try. In its put-on listlessness, it wants to belong to the Matthew Porterfield/Nathan Silver school of contemplative indie flicks, but it's not quiet enough nor patient enough in withholding its epiphanies and emotional rises and falls. It tends to narrate; it wants to tie up loose ends; and it's not comfortable with entropy as much as it wants to be, what with its central character odd, awkward caregiver Johanna (Kristin Wiig) and its central setting a broken-down hotel, uninhabited but burdened with poor junkie Ken's (Guy Pearce) dreams of restoration. It's a big, clumsy metaphor for Ken trying to rebuild his life after killing his wife, McCauley's (Nick Nolte) daughter and Sabitha's (Hailee Steinfeld--thank God she's getting work) mom, in a tragic speedboat accident. It all kind of sounds like a Wes Anderson sub-story. Anyway, Sabitha and her queen bitch bestie Edith (Sami Gayle) pen fake love letters from Ken to erstwhile nanny Johanna, leading to not the painful story we want, but a different painful story involving why you shouldn't sway your camera back and forth when shooting dialogue exchanges and how poignant zooms don't substitute for genuine feeling.

What's interesting is that Christine Lahti is in this film as a love interest for old Mr. McCauley. Lahti is also the star of Bill Forsyth's Housekeeping, the prototype for this movie. In Housekeeping, a bridge was the metaphor for human connections (lost and lasting), and it's a better one than this film's fixer-upper. You can fall off bridges, bridges can fall; a fixer-upper suggests that a little elbow grease will cure all ills. A genuinely small picture, Housekeeping seems large in comparison. Hateship Loveship, with its parade of astonishing character actors (haven't even mentioned Jennifer Jason Leigh yet), is "indie" in the way that Little Miss Sunshine was "indie." As such, it has a debt (imagined or real, I don't know) to have not only a plot resolution, but emotional resolutions as well. A crowd-pleaser that popular audiences will nonetheless label "frustrating" because there's no barfing or diarrhea jokes, it sees addiction as a plot contrivance, mental illness as a fortunate affectation, and interpersonal schisms as the spots Johanna is constantly cleaning off of surfaces. If you're not convinced, consider a moment where Johanna gets to tell off her tormentor that's handled not deftly like the bully sequence during Broadcast News' prologue, but instead like a fantasy--a cheap and badly-written one, at that--of exactly how scenes like this play out in movies that want to raise an unearned tingle.

Wiig is exceptional, though. Her Johanna's little moments of pleasure are delightful, and for a good fifteen minutes into the film, she fools us into thinking it's something special. Pearce is more tender here than I've seen him in years--ditto Nolte and the great Lahti. Leigh is scabrous and bitter as only she (and Amanda Plummer, I guess) can be, and Steinfeld is an actress I continue to want to see in movies. She's given the onerous burden in this one of most of the maudlin lines and reactions and carries them off effortlessly, with class. All of that's lost, however, in a picture so wilfully slight that it manages to be at once pompous and instantly forgettable. Its third act is bad enough, hasty enough, that it feels like it's late for something or, just as we've become, sick of its own shit and aware that it can't maintain its one note any longer. The very definition of a safe film, Hateship Loveship is simpering and a bit of a hardship. What a shame.