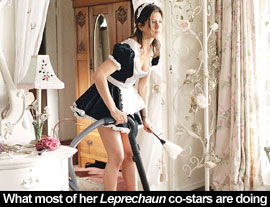 by Walter Chaw Nicole Holofcener follows her marginal success Lovely and Amazing with the equally marginal failure Friends with Money, presenting a series of interpersonal apocalypses as awkward dinner parties and scenes made unwisely at Old Navy by super-successful fashion designers. It's not subtle in its broad strokes, and once the layers of Angelino self-mortification and obfuscation are plumbed, it's not subtle in its character strokes, either. What it is is a caesura in the middle of those pictures that don't care about their characters that's only interested in its characters--a film that might be shorthanded as "European" in that nothing much happens as words and glances billow in carefully ventriloquited clouds. It's about how people talk to one another among friends and then lover/confidants on the drive home, and as such it provides a clearer look at conversation in any single exchange than does the whole of Crash. Friends with Money is a comparison of our intimate with our open lives; in the comparison, it suggests a third persona, an interiority--though not entirely successfully, making it only as good, really, as the conversation that it may itself inspire on the ride home.

Olivia (Jennifer Aniston) is a pothead and maid (and former-middle-school teacher) who steals her upscale clients' beauty products and scams free perfume samples from weary retail clerks. Her titular friends with money, shocked at her fall from a poverty-level profession semi-respected and patronized by rich people to a sub-poverty-level profession patronized exclusively by rich people, endeavour to solve their own perceptual psychoses using her as the catalyst. Holofcener, of course, does the same, marking Olivia as a cipher and a repository (just like race in Crash) of upper-class guilt and phantom, retarded, self-satisfied attempts at liberal actualization: a Chauncey Gardener floating in and out of our collective consciousness as a character dumb to class, status, and cash. Finding irony in the casting of super-Friend Aniston as this metaphoric zephyr, one of the richest, most over-exposed people on the planet, is only natural, of course. (That's called "smug" in a certain lexicon--and sure enough.) Aniston's new "friends" are fashionistas Jane (Frances McDormand) and Aaron (Simon McBurney); screenwriters Christine (Catherine Keener) and David (Jason Isaacs); generally wealthy Franny (Joan Cusack) and Mike (Greg Germann); and potential love-interest/skeezeball Mike (Scott Caan), who habitually follows Olivia around on her jobs, screws her, then asks for half the cleaning money.

Holofcener has a way with the Algonquin chitchat in two long dinner sequences but betrays a definite weakness for the unearned fairy-tale ending in concluding Friends with Money in the one way that feels the least justified. Its very artificiality serves to cause a reassessment of its entire body, of how the picture has written its observations on behalf of badly-sculpted personality types and cast them accordingly for aging actresses deserving of better than these wax casts of Holofcener's "Sex and the City" icons aged accordingly and retrofit with class sensitivity. Accordingly, Jane's a brittle harridan on the verge of a nervous breakdown, Franny's a warm, big sister-type who takes the wayward "sibling" under her matronly-wing, and Christine is the castrating she-bitch with a soupçon of sublimated humanity. The men, though, define them still as gay cuckolds or frigid compulsives or air-headed house-moms--without a hint of irony, I should add, rendering the film a little confused as to what it could actually be better served to be about. Friends with Money is crippling narcissism and the Janus of interpersonal relationships at its best and the LA social strata and the sanctification of fecklessness at its worst. I believed Holofcener was on her way to creating something of real value by testing the strength of family bonds in Lovely and Amazing, but she takes a step backwards here by trusting the tactile fidelity of her assumed, imaginary daguerreotypes buzzing around one another in contrived, indecipherable orbits. Originally published: April 7, 2006.