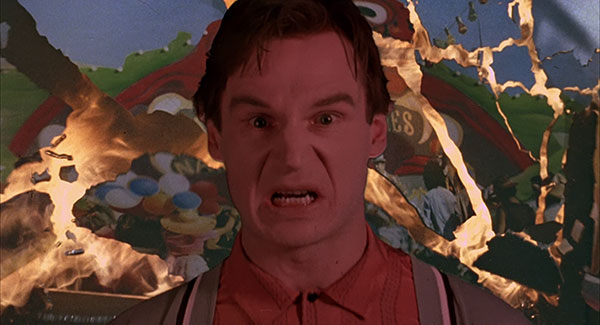 by Walter Chaw Sam Raimi's Evil Dead II is among the best American films of the 1980s. It's audacious and ingenious, the kind of movie people describe as having been made by the seat of one's pants--the kind of movie that's doomed to be underestimated because its genre is disreputable and its sensibilities are too cartoonish. Indeed, the energy in Raimi's early, best work is akin to Tex Avery and Three Stooges, but he controls it, wields it; the anti-David O. Russell. Only in Crimewave does he overuse that muscle. In Evil Dead II, the humour is low, there is absolutely no shame, and in a real way, the picture encapsulates what was delirious and sloppy about '80s blockbuster cinema. It's a thing of beauty, exaggerated pathos, and Wagnerian derring-do. Raimi followed it in 1990 with what's essentially a rebuttal to Tim Burton's Batman, the "biggest movie of the moment" from the year before. Batman was the first salvo in a barrage of prestige "pulp" entertainments that presented the Comic Book as "A" material; Raimi drags it back into "B," at least for a little while. His movies are EC and off-Code and Bernie Wrightson and Jack Davis and Al Williamson, while Burton's are German Expressionism and sad, sometimes inscrutably solipsistic tales of Oyster Boys. Raimi, in 1990, made the best comic-book movie there ever was, a title only challenged by Raimi's own Spider-Man 2: Darkman.

Dr. Peyton Westlake (Liam Neeson) nears a breakthrough in artificial-skin technology when some shenanigans into which his girlfriend Julie (Frances McDormand) has stumbled lead to kingpin Durant (Larry Drake) and his thugs breaking into Westlake's lab, murdering his assistant (Nelson Mashita), and horribly disfiguring the good doctor. Luckily, Westlake gets his spine clipped so he can no longer experience pain, and with the help of his (still-imperfect) liquid skin he can walk around in daylight wearing lifelike masks for a full 99 minutes before they melt. Truly, Darkman has everything. It's extremely, cruelly violent; has in the finger-collecting Durant a memorable villain with memorable henchmen, including a one-legged guy who sometimes perches on his partner's arm; and a romantic hero with fatal flaws (among them a sometimes-uncontrollable rage, related to his high pain-tolerance and adrenals working at full blast) trying to live a normal life with his ladylove while also killing as many bad guys as possible in his spare time. Darkman is not just fantastically ludicrous, it's operatic.

Consider a sequence set at a carnival that Raimi shoots like the funhouse-mirror version of the central murder from Strangers on a Train. It's a beautiful day. Westlake and Julie are on a date after Westlake has revealed to her that he survived the explosion at his lab apparently, impossibly, unscathed. Raimi shoots this innocuous tableau in subtle Dutch angles with sly push-ins so that there's a difficult-to-peg strangeness about it all. Then, a carnie swindles the loving couple, Westlake loses his shit, and Raimi ends up whip-panning between the three of them--Westlake, Julie, the carnie--in shots of increasing delerium. It's hysterical in every sense of the word, and it evokes the splash-edits of a comic-book page. I'm thinking, too, of the extended chase comprising the climax, with our hero dangling from a chopper and walking the steel beams and rebar skeleton of a high-rise, predicting Raimi's run with your friendly neighbourhood webslinger. It's exactly the right choice.

Darkman is full of right choices. I love a moment where an unfortunate crash-lands from a great height on top of the roof of a car, and how a horrified witness turns to see what appears to be that same unfortunate watching his own demise from a bus stop down the street. Raimi understands comic books, their potential weightlessness and heedlessness, because for him the film form has a similar anarchic elasticity. Raimi understands comic-book collectors, too: The grace note of Durant's "bring the Asian's fingers"--an effort to complete some corner of a trophy case--speaks to the collector in me in an uncomfortably intimate way. If the movie's audience is mainly guys who collect comics, it probably gets us all in the same uncomfortably intimate way. Drake, then best known as "L.A. Law"'s mentally-challenged Benny, delivers lines like these with a gleeful menace that landed him above-the-line status in Darkman's dtv sequel as well as Dr. Giggles. Neeson follows gamely along, modulating his voice to the appropriately breathless mad-scientist pitch and embracing the Gaston Leroux-ness of it all with a physical immodesty that predicts his current career as a middle-aged terminator. The picture is grandiose and adolescent; when Darkman is unveiled after his mutation, the way his skin stretches over raw, weeping flesh is very much in Bernie Wrightson's distinctive mozzarella style. And it's all you need know. 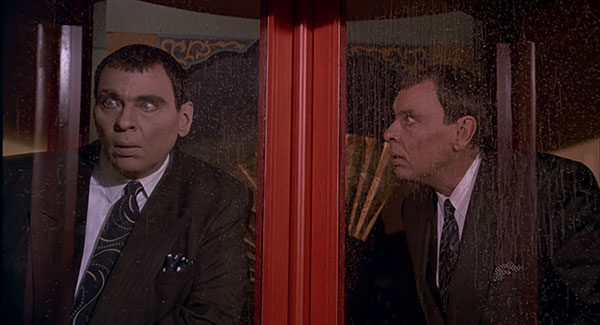 THE BLU-RAY DISC
Scream Factory reissues Darkman on Blu-ray in a spotty A/V presentation that's saddled with the same overenhanced master Universal used for their own HiDef release. Gratuitously denoised, sharpened, and oversaturated, the 1.85:1, 1080p transfer turns what was already lurid yet cozily of its era (like Creepshow, for example) into something cheap and garish. The elegant optical dissolve from Julie witnessing Westlake's lab blowing up to the graveyard service for him (cribbed from Raimi buddies the Coen brothers' Blood Simple--same actress, even) now looks haloed and clumsy when it's really anything but. Objectively speaking, it could be worse: dynamic range is decent, close-ups have reasonably good detail; my disappointment is intensified by my attachment to the film. The attendant 5.1 DTS-HD MA remix isn't markedly different from the alternative 2.0 option, the latter presumably representing the original Dolby Stereo soundtrack. Dialogue is exceptionally clear, while the explosions generate an impressive rumble for the movie's age.

"Interview with Liam Neeson" (7 mins., HD) sees the actor graciously downplaying the difficulty this disciplined man of the stage had with nutso Raimi, but you actually learn more about Neeson in the "Interview with Frances McDormand" (10 mins., HD), in which the odd-seeming actress speaks of how leonine is this rangy actor and how they both struggled at times with their roles. McDormand continues by expressing surprise that a cult's built up around the film, sharing that she only learned of it when talking with makeup artists who revere Raimi's early work up to and including this one. She has a great moment, too, where she says she was miscast as Julie and a bit resentful of having to play the damsel in distress at the end. It's a wonderful piece. More comes in "Henchman Tales" (13 mins., HD), wherein various supporting actors reveal that Neeson tried to go "method," asking people to call him Darkman off camera. It's a tactic he eventually abandoned because Raimi teased him about it mercilessly. "The Face of Revenge" (13 mins., HD) is a segment featuring makeup designer Tony Gardner, who among many things shares that for continuity's sake, at the end of each day, his team would take Darkman's facial applications and stick them to a wall for reference the next day. "I wish I would have kept that wall," he says. No kidding.

"Dark Design" (17 mins., HD) is a look at the production and fabrication side of the project that goes hand in hand with the "Henchman" piece in detailing Raimi's quest to fill the edges of the frame with interesting errata and character beats. "The Name is Durant" (15 mins., HD) is an interview with Larry Drake that shows Drake to be a weirdo of the first order. He had initial reservations with the violence in the script, specifically the finger-cutting, as he dreaded copycat crimes. He adds that Raimi had never seen an episode of "L.A. Law", speculating that this alone led to his casting in what was, if memory serves, a truly surprising and radical departure for him. The HD-bumped "Darkman Featurette" (6 mins.) is a B-roll advertisement thingamajig from 1990. It's what you'd expect. "Cast and Crew Interviews" (9 mins., HD) are more from the same theatrical push, with McDormand seeming a lot more on board with the whole thing then. A quartet of vintage talking-heads, likewise upconverted to 1080i, offers extended time with Colin Friels (12 mins.), McDormand (20 mins.), Neeson (28 mins.), and Raimi (23 mins.), who otherwise does not appear on this disc. (I wonder why.) Without the benefit of hindsight, the principals express big dreams and high expectations. Lots of hagiography and Raimi's manic energy rule the day.

Lastly, a feature-length commentary with DP Bill Pope is one of those curios where the participant comes across as not all that jazzed about the topic. Although Pope would go on to shoot Raimi's Army of Darkness and his second and third Spider-Man movies, he's generally dismissive of the project, shares that he didn't even want to do the film, and tells a few stories out of school regarding on-set disputes. It's a great yakker, in other words, though those fans looking for screen-specific anecdotes will come away disappointed. It's too bad that Neeson couldn't have shared Darkman duties with Raimi's first choice, Bruce Campbell. That would've been groovy. 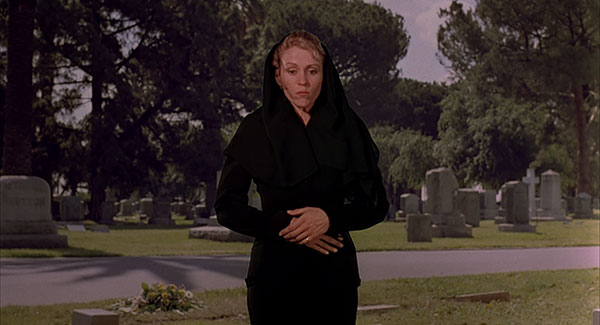