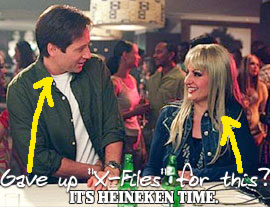 by Walter Chaw SPOILER WARNING IN EFFECT. Pity Toni Collette, her inability to land a lead role that might catapult her into the limelight bespeaking of either a general dearth of quality lead actress roles or an inability to choose her "breakthrough" projects carefully. The highlight of a lot of good movies (The Sixth Sense, Clockwatchers, About a Boy) and bad ones (Muriel's Wedding, Hotel Splendide), too, her latest chance to evolve beyond accomplished second fiddle has elicited a glorified supporting role in Nia Vardalos's latest bit of unwatchable crowd-pleasing garbage (Connie and Carla) and the ingenue part in an embarrassing bit of housewife Orientalism erotica that transplants the Yellow Peril of the American 1950s to a modern-day Outback setting (Japanese Story).

What is it about Vardalos that so offends? Possibly it's that vacant, expectant beam of a grammar school teacher who's told a joke slightly above the comprehension of her disenchanted charges and chooses to let her mannequin smirk tease the escape-reflex titter in place of a viable punchline. Or, possibly, it's the speed with which she's become the distaff Woody Allen (that is to say, the new Barbra Streisand), a homely person running out of inspiration and popularity who masterminds projects that cast them, inexplicably and hilariously, opposite extremely attractive performers bent into the impossible contortion of pretending ardour for their funny-looking bosses. But most likely, it's because she makes films like Connie and Carla, so wearyingly self-satisfied, they're the filmic equivalent of a good laxative: in and out of your system before you know it, but exhausting all the same.

Connie (Vardalos) and Carla (Collette) are a pathetic lounge act playing in airport bars when they witness, Sister Act-style, mobsters being mobsters. So they run, Sister Act-style, and they hide in drag, Sister Act-style, the twist being that they disguise themselves as drag queens and single-handedly rejuvenate the drag show scene with their awful dinner theatre theatrics (Sister Act-style). The result of all this ass-clownery is that Connie and Carla comes off as something every bit as cheesy and embarrassing as an actual dinner theatre show while the lovely Collette is made to look like Chita Rivera and Vardalos is made to look just like herself with a little more blue eyeliner.

A weird subplot in which Connie woos the straight brother (David Duchovny) of one of her drag pals leads to the only funny moment in the picture when the straight guy recoils at getting kissed by what he thinks, with good reason, is a man; and an extended cameo by Debbie Reynolds leads to toying briefly with the idea that Connie and Carla is actually a satire of something. Alas, the picture is just another high concept vanity piece meant to showcase Vardalos's limited talents in as self-indulgent, interminable a way as possible--dead giveaways include the perfunctory body image speech (that still doesn't explain how Duchovny would fall for Vardalos in drag), and the strange defense of drag culture that seems actively engaged in a semi-aggressive chiding of it. Next stop: Vardalos as a size 15 dancer at the Joffrey Ballet, dating Brad Pitt, and pretending to be a man so she can study the Torah.

For all the crimes of Japanese Story director Sue Brooks (who makes movies called An Ordinary Woman and The Drover's Wife--if her career had a cover, Fabio would be on it), it at least has the decency to look good and sport a few haunting tunes by Ryuichi Sakamoto to augment a minimalist Elizabeth Drake score that cops the feel of John Barry's work on Walkabout and Maurice Jarre's on Year of Living Dangerously. The irony of Japanese Story's stunning score, however, is that the film it decorates could just as easily be summarized by Monty Python's "I Like Chinese" song.

Patronizing at the least, Japanese Story wallows in the worst cultural stereotypes on both sides of the divide, branding its tough geologist heroine "Sandy" (Collette) while introducing the visiting Japanese industrialist's son Tachibana Hiromitsu (Gotaro Tsunashima) by the not as innocent as it seems exclamation of "Well, which is his surname?" He mistakes her for his driver, she teaches him the difference between "dessert" and "desert," and because there are no shallow lakes in Japan, he accidentally kills himself when he dives exuberantly into a mud puddle. But not before they make sweet interracial love together, with Sandy patting him sympathetically on the back when a miserable old coot starts in on an anti-Japanese screed and Hiromitsu writing things like "my heart is open" in that never-tired contrivance of a "by the time you read this" letter. (Oh the bittersweet romantic irony--the pidgin voiceover accompanies images of poor Hiru being shipped home in a crate.)

The Japanese are uptight and taciturn, the Aussies are laid back and easy, and the only things to get out of Japanese Story alive are Collette's powerful, wasted performance, that score by Drake, and some amazing cinematography by Ian Baker, a guy who, much like Collette, has been the best part of some pretty bad movies (most recently, It Runs in the Family). To the picture's credit, it does eroticize the male body in a way that's interesting, and it represents the strangest redux of Starman (a visiting alien goes on a trip and makes sweet love with a tortured heroine) in recent memory. Collette deserves better; next stop: a supporting role in The Last Shot. I wonder. Originally published: April 16, 2004.