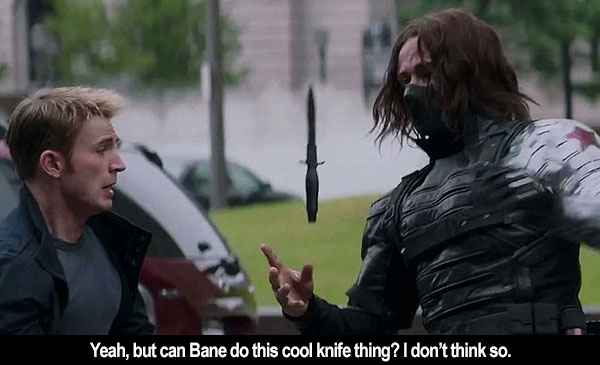 by Walter Chaw A fine companion piece to last summer's The Lone Ranger, with another hero whose essential goodness has become anachronistic in a world defined by its ugliness and venality, the Russo Brothers' Captain America: The Winter Soldier (hereafter Cap 2), for all its boom-boom, is surprisingly thoughtful--and surprisingly doom-laden. It's dark as hell. Gone are the pulp machinations of Joe Johnston--this one is more The Empire Strikes Back than The Rocketeer, where the victories are Pyrrhic and the bad guys are smarter and better-equipped. By the end, this most optimistic of superheroes resolves himself to rescuing a friend, while his closest comrade-in-arms advises him to look for love again. They're small goals, the kind of goals that mere mortals happen to share with this demigod. As such, they provide the film with an unexpected payload of pathos and nostalgia for lost selves that used to believe the world would be better if only we had a friend upon which we could always depend, and love that would remain evergreen. Cap 2 is about our better natures, and it's about the realization as you grow older that you may have allowed your better nature to be subsumed by misdirected senses of duty. It's about what it means to compromise your values on the altar of "maturity" and "sophistication"--even "progress" and "modernity." And when it works best, it's about what it means when you don't.

It's a slippery beast, this movie, because what's good about it is the virtuousness of Steve Rogers (Chris Evans), a.k.a. Captain America, but then there's all this genuinely upsetting violence and a high body count that includes some lingering considerations of corpses. It shares that with The Lone Ranger, too, while not also sharing Gore Verbinski's gift for large-scale action choreography. Still, it does capture, like that film did, a certain illness one feels when someone as fundamentally decent as Captain America has to see bad things, be betrayed the way he's betrayed herein, and become so desperate for any scrap of goodness that he begins to look for it in a Smithsonian special exhibit about...himself, seventy years ago. I like a moment where someone tells Steve that the good guys committed a lot of atrocities in WWII as well, and how he responds that yes, that's true, but they were carried out with freedom--not surrender to a police/surveillance state--as a goal. Like Superman killing a drone to end Man of Steel (and Batman using everyone's cellphones to catch the Joker in The Dark Knight), Cap 2 is also critique of our technological dystopia and cancerous paranoia. It's every bit the suggestion that 9/11 did what it was meant to do, drawing the connection loud and clear in the idea that the only reason liberty-defending monolith (and increasingly despotic) S.H.I.E.L.D. even exists is because there is great evil in the world. But mostly Cap 2 deals with loneliness and the inability to accept change. A lot's been made of the spy angle in the picture, but what it seems to me to be most is a film noir.

Recapitulation of its byzantine plot is useless and beside the point: sufficed to say that Cap 2 plays with issues of civil liberty, artificial intelligence (leading to a simply delightful throwaway reference), and the inexorable encroaching of the crimson tide. It features leader of S.H.I.E.L.D. Nick Fury (Samuel L. Jackson) in a central role, doing the heroic monologuing against evil bureaucrat Alexander Pierce (Robert Redford). And it casts Black Widow (Scarlett Johansson) and Falcon (Anthony Mackie) as sidekicks more useful as additional elements during the film's action set-pieces than anything else. Where the picture finds itself is in revealing the identity of titular baddie The Winter Soldier (Sebastian Stan), and in a scene where Cap visits his would-be girlfriend Peggy (Hayley Atwell), first via archival newsreel interview, then at her deathbed in a scenario that reminds of the classic "The Twilight Zone" episode "The Long Morrow". There's a tremendous amount of pathos here, and Evans plays it with a wounded vulnerability that the twists of the plot amplify. Nothing is exactly as it appears to be--and very much like the WWII soldier returning from war he is, Steve discovers a landscape littered with amorality and fatales. It's a sweetness the first film reflected in its vintage setting, coming through here in the sequel's sense of loss and corruption.

It's a shame the picture often feels bloated, that its action scenes are hard to follow and that there are really no stakes to any of it. None of the twists surprise, none of the world-saving hijinks ever suggest the world was in any particular danger. Although the Captain America pictures have risen as probably the best series in this flood of Marvel product, they're still burdened by the responsibility of being extended plot exposition for an endless cycle of tentpole releases. Every film is a cliffhanger, and it's the nature of comic-book characters to be immortal--"killed," then resurrected through some contrivance. Consequently, the only things that matter in Cap 2 are his isolation and disillusionment. They're elements of the character and the film that are so compelling, so melancholy, that everything else (and this movie is mostly everything else) becomes a distraction. Even Falcon's backstory as a war vet leading a PTSD support group in his mild-mannered by-day occupation speaks to mortal wounds and things lost in the fire. Cap 2 is a truly great film trapped in just another Marvel product. For what it's worth, though, I'm looking forward to its sequel.

I'm on board with the criticism that universe-building hamstrings Marvel's stories, both in print and on screen, by placing individual plots in the service of an ever-expanding marketing plan. But this movie seemed less burdened by the shared universe than most of Marvel's line. The bigger problem was that the creation of an ultimate threat took so much exposition that the more personal stories of betrayal and redemption were buried beneath tons of helicarrier debris. This seems like yet another action movie that could raise the stakes by lowering them. They could have used a few more scenes of Cap wandering through the modern world that weren't transparent set-up for continuity sign-posts like Falcon or Agent 13.