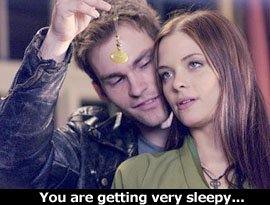 by Walter Chaw There is a moment in the middle of Bulletproof Monk: Chow Yun-Fat leaps to the top of a car, brandishing two pistols, his overcoat flaring in slow-motion as he rains down bullets on the bad guys. It's an homage to Brother Chow's work with John Woo, of course, in the seminal HK action flicks The Killer, Hard-Boiled, and A Better Tomorrow--and Woo is listed among the film's producers. It sort of makes you wonder why the pair doesn't stop dancing around and just make another movie together already, particularly since neither Chow nor Woo has really made a film worth a damn since sailing over to a Hollywood that doesn't understand them. The American film industry would rather marginalize them into racial caricatures than take advantage of their unique talents.

In that spirit, Brother Chow finds himself in Bulletproof Monk as what is essentially a Yoda figure for an impetuous young tow-headed pauper (with potential), Kar (Seann William Scott), and at the beck and call of another first-time director (Paul Hunter). Par for the course for Asian superstars in Tinsel Town, in other words--with little exception they are paired as comic relief or foil for idiots in films directed by first-timers and proven losers; I've said before that it feels like racism and, indeed, it feels like racism still. That being understood, Bulletproof Monk is racism of the reductive breed (a character calls Chow's dialogue "fortune cookies," and damned if they aren't)--a product of the Mr. Miyagi school of orientalism that makes mystical all things Far Eastern and abrasively jocular all things occidental. It's the school that accompanies every appearance of an Asian person onscreen with bamboo flutes and reverential gongs.

So Bulletproof Monk, directed by a music video and commercial director like a feature-length music video or commercial, falls into the category of film where Asians sell Gremlins to white people as opposed to the Adam Sandler/Happy Madison category of film, where Asians are screeching waiters and nail-salon owners. Curiously enough, Sandler's last film (Anger Management) also features a group of Buddhist monks going downtown on some Yankee ass, raising the question of which sort of racism is actually more dangerous: the kind that makes sport of Buddhist monks, or the kind that elevates them into the realm of the preternaturally wise. American Indians used to be treated this way in American cinema (fool vs. wise fool)--unsure how to treat them in any different way, modern American cinema has chosen not to treat them at all. I'm beginning to think their invisibility, if not laudable, is enviable.

Based on a comic book, Bulletproof Monk finds the titular monk (Chow)--who doesn't appear to be bulletproof so much as a good healer--entrusted with the protection of a mystical scroll coveted by evil Nazi Strucker (Karel Roden) and his granddaughter Nina (Victoria Smurfit, created by Gargamel to corrupt the smurfs with non-homosexual longing). Nina (shades of Alison Doody's forgettable Aryan femme in Indiana Jones and the Last Crusade), under cover of a human rights organization, sends endless henchmen in the pursuit of Monk while Monk sniffs out the makings of Prophecy in slacker Kar (Scott). Meanwhile, Kar has designs on Jade (Jaime "Stop Calling Me James" King), the naughty chop-socky squeeze of ridiculous lesser-boss Mr. Funktastic (Marcus J. Pirae). Prophecies get fulfilled, guy gets girl, Monk walks off into a guqin and sheng triumphal sunset, secure in the knowledge that Kar-san has learned all there is to know about waxing on and off.

Its action badly framed and serving mainly to remind that if you can make Scott and Chow look like martial artists, there's no real point in martial artists anymore except as stand-ins for non-martial artists, Bulletproof Monk is completely disposable and, like most other Western vehicles for Eastern stars, disturbingly violent at its denouement for the, I guess, salacious foreign box office. It has problems with tone (an action comedy where two out of three father figures are brutally murdered and an entire Buddhist temple is inexplicably tortured) and doesn't appear to have a cohesive editing philosophy, causing the film to feel as though it were thrown into a blender and excreted into the Cineplex before its birth date. Bulletproof Monk is a Rush Hour that loves its antiquated Chinese caricature instead of mocking it--a hijacking of culture at its worst, and a broadly played, cartoonish movie that doesn't make any sense in the details (and doesn't leave any impression in the gestalt) at its best. Less offensive in the final analysis than wearying, Bulletproof Monk will come and go, and so it goes. Originally published: April 16, 2003.