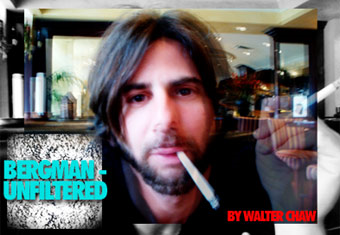 And of course I agree. The bar of Denver eatery Panzano is low-hung with a thin haze of "cool" (not to be confused with "stale" or "seedy") second-hand smoke, the sort of atmosphere romanticized by noir and one where I feel curiously out-of-time. A gauzy pre-spring Colorado day obliges by shooting shafts of sunlight cathedral-like through the particulate pollution, reminding of a scene in Nir Bergman's debut Broken Wings (Knafayim Shvurot) in which a depressed teen ponders the worlds-upon-worlds of dust motes in perpetual Brownian motion.

Mr. Bergman himself is slight of stature and emotionally intimate, leaning forward with our handshake and fixing me with a gaze half-vulnerable and half-steely. Supposition fills in the blanks: a native of Israel, shell-shocked no doubt, immersed in the politics of the region no question--and yet Broken Wings isn't about the second Intifadah (though discussions of the film are obsessively focused on it). A question of politics is alien, then, in the narrative perspective (in fact, most questions posed the filmmaker revolve around the "why not" issue), but I believe that within the portrayal of an ordinary Israeli family living in modern-day Haifa--Bergman's birthplace--stricken by unimaginable, insensible loss and the myriad burdens of the mundane, there emerges a striking statement about war in the humanization of its periphery.

Topical to our own focus in these troubled United States, where the economic hierarchy imposed by our elected caste system trumps our involvement in an unpopular war as the driving issue in our upcoming election, Broken Wings makes of a Middle East conflict known only in terms of the theoretical/theological to us suddenly immediate and important. A marriage of oppositions comprises Mr. Bergman, and as we spoke, I began to appreciate a young artist unstained by too much experience with the pencil-sharpeners of the working press who's still willing to admit to affection for Ordinary People, Carlos Castaneda, and a good pocket-wrinkled pack of Marlboro Lights.

FILM FREAK CENTRAL: Tell me about the philosophers that informed your film.
NIR BERGMAN: When I was my character Nair's age, around seventeen, I was really interested in Berdyaev--do you know Berdyaev?

Never heard of him.
(laughs) How about Ouspensky?

See, you're exposing my ignorance.
(laughs) No, no they're a little obscure. P.D. Ouspensky was writing Berdyaev's way of thinking--Berdyaev was from Soviet Georgia, he went to Egypt and came up with what he called "The Fourth Way." The first way the way of the fakir, the second the way of the yogi, the third of religion, and then his way, the fourth way--the idea that we don't have one ego, but many, and they rule us independently. It's the idea that we aren't of one will, but of many conflicting wills so that we can never really do what we want because there's never an "I" in our system of identity. Our body wants something, our heart wants something different, and our brain wants something different again.

That sounds like the division that defines your three main characters.
Exactly right--the mother mortifies the body, the daughter mortifies the heart, the son mortifies the brain. Denial as compensatory means to addressing their guilt. I was immersed in this philosophy when I was seventeen and I just couldn't make it work with 'Why grown-ups were doing what they were doing.' Why go to school for twelve years for a piece of paper? Why do people go to the army? Why war? Why ambition and the will to material achievement? That was me at seventeen, the Yair character: self-absorbed the way that teenagers can be and informed, too, by the absence of a father. Mine through a divorce, but absent just the same. I also read a lot of Carlos Castaneda--you know him?

Ah, one out of three, Peruvian transcendentalist: tensegrity, Don Juan, and the world as a bit of foam.
(laughs) Yes, right. I read a lot of Castaneda then--he was a hero of mine and had a lot to do with the teachings of Ouspensky. I was fixated on that one school.

The idea of tuning in and dropping out, of a universe in a dust mote, is highlighted in Yair's introduction into your film.
Absolutely. Absolutely right. Let me tell you a story. When I went into the army at the age of eighteen, you're required to do military service in Israel, men and women, when you turn eighteen--for me to go into the army was a war between that idea of Don Juan and the hard reality of my supervising officer. Until that point I thought that reality was what you made of it--and suddenly reality was all green. My officer was hard. He was on me all the time and I didn't have the facilities to deal with that so I came back to Castaneda's writings on "Don Juan" and asked him, in essence, what to do. To be a servant, to serve, that's a great opportunity to understand what it means to be free--what you have to do is make yourself the perfect servant: in other words, everything that you do, do with servility, and do it with art. Anything he'd tell me to do, I'd do with a personal, individual investment. I had a girlfriend in the army I told about this and in time, it began to work--slowly, slowly, the officer started to back off. It wasn't until a year later that I learned that my girlfriend had taken the officer as a lover some time before we had left and that was why he had leaned on me so hard--she said, "You don't really believe that it was Castaneda's Don Juan that helped you, do you? I told him to back off or I would tell his wife."

You seem to be talking about the immobility of reality and, on the other side, the inexorability of faith.
Yes, I said to her, "It doesn't matter, I survived." I've got to tell you that I still believe that it was my belief in that philosophy that saved me.

We're in danger of talking about the military strife in your part of the world when we begin to speak of your military service.
(laughs) It's okay, I'm ready.

I'd rather not--just to say that your film says more about war in avoiding it than many others do in wallowing in it.
I think that's true. The father in Broken Wings dies in a stupid way--he's stung by a bee--and his family is devastated. I had it in my mind, I can't separate it out, it's embedded in everything that I am, this war... Just that I agree with you, that telling you as intimately as I can about the humanity of my characters in dealing with this senseless thing is the best that I can do to tell you what it's like in many respects to live in Israel today. It's like living anywhere. My next film will deal a little bit more with the specific country--the working title is "Macho: and Other Tales"--set in 1982, the war in Lebanon, so it's instantly more political, but again the war isn't inside the film, just a far backdrop. It's, again, about a period of time in my life when I didn't have a home, very personal to me--a young man finding his manhood in a very rough place. It's not political, exactly, but it does discuss our education and that truth that you're small and that you have to be tenacious to survive. That issue of smallness is very important to me--I never grew up, you know, I was always a little bit of a dreamer while all my friends moved on.

Were you conscious that you might be criticized as an Israeli filmmaker for not addressing the Palestinian conflict?
I was, and I felt a lot of guilt for it. Almost all the questions at Toronto were about why I didn't do this and why I didn't do that. Some people you know see this family as our country, still dealing with the murder of Rabin in 1994. I started the script way back in the beginning with a scene of Rabin's assassination so I can relate to that very strongly. My country is an orphaned country right now--lacking a leader--and we have to go through our own process of grief and searching to get to where we have to be going.

The aesthetic of your family dynamics reminded me of something that Mike Leigh would do.
That's a great compliment--Leigh is an incredibly important influence on me and I was very conscience of trying to emulate his sensibility. As a film student it was a revelation to see how Leigh worked. Before I knew that I wanted to be a filmmaker though, around when I was sixteen and moved out of my mother's house--she had a new boyfriend and I couldn't be there anymore--I was living alone but I had a VCR with a tape of Ordinary People. I must have seen the film more than thirty, forty times--I knew the dialogue by heart, so when I came to make my first film, that was the first film that jumped into my head. I wanted to make people feel the way that I felt, at the age of sixteen, when I saw Ordinary People.

I think it helps if you're sixteen.
(laughs) I'm sure you're right.

The thing that's different from your film and Redford's is that yours resists the "emotional narration" of a Judd Hirsch shrink archetype.
When you see Ordinary People today, you see the contrivances and the psychologist is one of them. It was good for when it came out, of course, because at that time it was a new thing to go into therapy--the mother is ashamed of her son for going into a therapist--but things have changed, everybody has a shrink on the speed dial now.

Dressing Yair in a mouse suit is a complicated image.
Yeah--I wanted a mask. From the first draft he was wearing a mask as he passed out his political flyers. Initially he was an alien, reflecting his relationship to the world. But that wasn't quite the right image for me, almost too literal and not, what's the word, pathetic? Pathetic enough, and as we went through more and more drafts, it became clearer that the philosophies that moved Yair weren't alien so much as a song of the oppressed. A mouse stuck in his maze. He's separated from his pain and it's easier to hide behind a mask, that much was obvious, but as I was scouting locations I found this tunnel in Haifa and it came on me in a flash. He's in these tunnels and he can't escape them back into life, a mouse, and that image made his dialogue that much clearer to me.

The obvious comparison is between you and Yair, but the younger brother, the filmmaker, strikes me as almost the better likeness.
There's no question that there are elements of me in both--in the whole family, really. The younger brother, what he does is try to rejoin the dead father and, in that way, glue the family back together. What we'd see as suicide attempts, he sees as acts of altruism--and he films it all, shooting through a camera as a means to distance himself but also a way to replace his memories with the videos that he takes. You don't have to remember it if film is remembering it for you.