by Walter Chaw Consider this time-capsule exchange from the horrifically-misguided mess Suri Krishnamma has made of Wuthering Heights and shudder:

"I swear to God if you ever leave me I'll kill you."

"Then I'd have to come back and kill you so we could be together."

"If you kill me then I'd haunt you. Forever."

How about I just kill myself while you two sort it out?

Relocating Emily Brontë's moors-bound melodrama to the OC (and indeed, one working title was "Wuthering Heights, CA"), this MTV production displays a fantastically tin ear, fabulously incompetent performances, and a directing job that falls just between "blind man" and "howler monkey." It's not so bad that it's good, it's so bad that I was moderately surprised it didn't damage my DVD player. The adaptation is loose enough that it could just as easily have been called "Moby Dick, CA," and the few spots where it does choose to be faithful to its source don't make any sense in the broader context of the film. Take the scene where Cate (dead-eyed porkpie Lolita Erika Christensen) gets in a car accident, is carried into a house by moony Edward (the Edgar Linton character, Christopher Masterson), and then kept there, doctor-free, for the duration of her long convalescence. It makes sense when a woman falls ill at a secluded country manse in late eighteenth-century England; it doesn't in early twenty-first century Golden State.

Oh, but if it not making a lick of sense were all that ails this film. Alas, Wuthering Heights is the celluloid equivalent of a good, thorough flogging. Little Cate and little Hendrix (how bitchin' is it that they change the Henley character's name to "Hendrix"?) and their dad Earnshaw (John Doe, Liz's dad on "Roswell") live in a dilapidated lighthouse ("The Heights," natch) when Dad comes home one day with towhead surfer orphan Heath. Once they're all a little older, Heath (Mike Vogel) and Cate (Christensen, just getting worse all the time) fall in love, Hendrix (Johnny Whitworth) grows jealous, and together they attract the attention of Cruel Intentions siblings Edward and Isabel (Katherine Heigl, Isabel on "Roswell"). Edward is a cello playing nebbish, Isabel is a crazed man-eater (who doesn't, unlike Heigl's "Roswell" Isabel, appear capable of changing ketchup into mustard), and this bizarre love pentagon ends in tears.

No longer the dark, brooding gypsy, Heath is re-imagined here as a windblown, guitar-playing Byron who inexplicably has turned the back-catalogue of The Sisters of Mercy into a series of spineless organ ballads. (The transformation, as it happens, a fairly succinct summary of what's been done to the book.) Heigl looks spectacular, especially compared to the odd baby-fat puffiness that accompanied her on "Roswell", but she earns the odious stigma of being out-acted in a film by what must be the worst young starlet eking out a living being mistaken for Julia Stiles (and what an honour that is) in Hollywood. Masterson is boring, Whitworth is hysterical, and Doe gets off easy by kicking the bucket early in one of Krishnamma's excruciating dissolves.

I can't think of one positive thing to say about this film. A moment in which Cate's "ghost" (a transparent Christensen) leads Heath to her spawning grotto stands among the low points of western culture. When Cate gives birth, with Heath as Swayze-in-Point Break midwife, the question arises again as to how the Internet could exist in a world without telephones (and how Isabel could be uploading Heath's songs when her computer is turned off)--and as Cate dies, the question arises as to how anyone would care or, really, could even tell. When the end credits finally roll, they stream by at light speed in a sensible hurry to be done with this squalid cess. 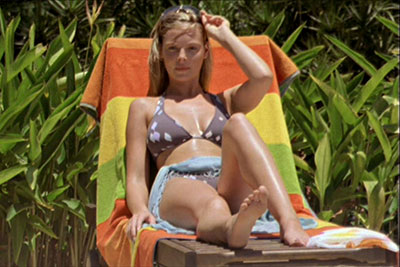 THE DVD
Paramount can't leave well enough alone, however, and presents this stillbirth on DVD in a 1.78:1 anamorphic video transfer high on noise and low on depth. It looks like what it is, a made-for-television film, and the extent to which the 35mm flick suggests medium-level digital video speaks to the sloppiness of the presentation, all edge enhancement problems and colour bleed. As one of the two quotes pulled from the SAN DIEGO UNION TRIBUNE's review of the thing for the packaging involves the alleged beauty of the photography (sometimes you feel sorry for publicity), a pity that more care wasn't taken in the transfer. Then again, if the review is positive, the reviewer's credibility is permanently suspect. A DD 2.0 audio is laggard and unimaginative. For a film produced in 2003 for the world's most perfidious cable music channel, just the fact that this thing is being released with a 2.0 mix instead of in 5.1 says something. There are, blissfully, no other extras--not even one of the heavily-rotated trailers that somewhat successfully lured a nation of pod-kids to this electronic lobotomy. Originally published: March 22, 2004.