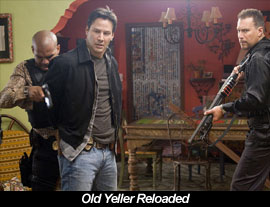 by Walter Chaw Keanu Reeves's turn on the ring-around-the-mopey of skeezy LA crime dramas based on (or written by, or inspired by, or ripped-off from) James Ellroy's hard-boiled noir prose is David Ayer's second time around this track, Street Kings. No wonder it feels weary and worked-over, then, from the opening blare of an alarm clock to a gritty™ conclusion that suggests that the status quo is FUBAR--always has been, always will be, now with mas macho! Close your eyes and without any mental flexing replace Reeves with Ethan Hawke or Christian Bale or Scott Speedman or Joaquin Phoenix, or sub Reeves's character's commanding officer Wander (Forrest Whittaker) with similar wool-clad bogeys done not better but identically by Kurt Russell and James Cromwell. It's never a question of who's rotten in the force (everybody, stupid), never in question what the role of the anti-hero will be. Rather, it's mainly a matter of what place vigilante justice will have in this moral quagmire of due process vs. capping the hoods and letting the legal vultures pick over the sticky wickets. It's the Dirty Harry school of hanging judgment--the iconography of Eastwood and Bronson and Stallone in the '80s (culminating for the latter in the ultimate state-sanctioned vigilante, Judge Dredd)--and it's only really interesting for its popularity again amid the reign of a President who's modeled his administration after Reagan's. Why this concern about the breakdown of due process and the futility of real justice during terms that give lip-service loudest to a return to values? We only make films this ugly and futile when to a large extent we've abandoned any hope that our institutions of security will protect us from the night.

Is it actually necessary to recount the tale of our rogue cop Ludlow (Reeves), lapdog of ambitious Commander Wander and dirt-smudged prize of the elite vice task force? How he uses unconventional means to achieve his bombastic ends and earns the attention of Internal Affairs ("Those bastards!") in the process before discovering a shocking conspiracy that goes all the way to the top and challenges every notion of right and wrong Ludlow has worn as a shield all these bloody years? Am I surprising anyone by revealing that Ludlow has a tragic past (a dead wife the most popular choice for this sort of thing, though dead kids are also popular; dead partners play a role, too, but that usually happens over the course of the film and not as backstory) that he's trying to work out, giving him a nihilistic edge that hasn't been sharp since Lethal Weapon more than two friggin' decades ago? Street Kings is thunderously boring and relentlessly familiar--a movie I've seen at least a dozen times in the last few years, with the interesting caveat that although it's always unchallenging, I like it about the same each time I see it. The picture subscribes to a worldview I subscribe to, in other words, and so I don't mind sitting through it again in some other form. That being said, it bears noting that there's something ineffably off about Street Kings. The pacing is bad, the writing a little purple (like Ellroy tends to be, though florid's the better word--or maybe self-conscious?), and it seems a tad self-righteous in discussing corruption in the police force, as if there's any question anymore in anyone's mind that the police, maybe especially the LA police, are corrupt. There's no sport in potting fish in buckets; bad form to take so much pride in doing it.

Ultimately, Street Kings is just another completely forgettable film that talks rough, ladles on the violence, and swaggers around for a couple of long hours before sinking without a trace into the consensus. I'm already having a hard time distinguishing the picture in my memory from Harsh Times and We Own the Night (and, of course, Training Day); the sharpest impression it leaves is that even without Denzel Washington playing King Kong, what we have here is a portrait of corruption where only the black cops are without some variety of street-cred. In fact, the blacks in Street Kings are, to a one, corrupt and/or gangsters, and while there are as many bad white men in stereotypical roles, it's the blacks who are left with the primary burden of sin. What remains when the smoke clears and the blood puddles is white knight Keanu (and whiter knight IA captain Biggs (Hugh Laurie)), asserting that their brand of vigilante justice is the only viable brand--even though Ludlow has shot a couple of people in the back and plugged one guy while he was peaceably handcuffed to a flight of stairs. Unforgivable, mortal crimes in the piece include skimming a little off the top, and no amount of Ludlow's assertions of "We were brothers! Black and white in a black & white!" lessens the weight of that inequity. I love James Ellroy--his L.A. Confidential is a work of real genius--but I wonder if he's not something of a one-trick pony. And I wonder if that pony isn't the proverbial dead horse. Originally published: April 11, 2008.