by Walter Chaw Andrew Fleming's Nancy Drew isn't just bad, it's fascinatingly bad. From minute one, it's an example of what happens when nobody knows what the hell is going on and doesn't have the wit to hide it. It suffers from the same malady as Pirates of the Caribbean: At World's End in that it's only confusing if you walk into it believing there's something to figure out--but unlike that picture, this one has so little in the way of internal coherence that it's almost a work of surrealism. When teen sleuth Nancy (a fetching yet robotic Emma Roberts) awakens to find herself abducted in an old projection booth, she doesn't panic and search for exits, she stands up, collects her compass (why does anyone need a compass in the middle of Los Angeles? Dunno), and heads straight for a little window that she promptly opens onto a scaffolding, thus enabling her snickersnack escape. It mirrors an earlier scene in which Nancy discovers a letter pivotal to the picture's central mystery stuck in an old book that, as executed, has all the weight and import of every other indecipherable, non-linear, dada scene in the piece. I'm not suggesting, even, that there's no tension in the film, as there's tension galore in trying to follow, much less predict, its astonishing leaps of baffling, shit-headed incongruity. There are no impulses that make sense, no characters with either a toehold in our reality or a justification for their existence (and the only people who might give a damn about Nancy Drew as an institution are too old to see the film on their own and unlikely to take their baffled children, anyway). As a mystery, in the most literal sense, it's possibly the most mysterious film of the year.

Nancy, mired in the 1950s, isn't an anachronism the way the Bradys were in The Brady Bunch Movie--she's no fish-out-of-water despite the country-mouse set-up of Nancy venturing from the pages of her beloved 1930s (through to the '60s--suffering revisions and updates every step of the way) book series into modern Valley. Nancy Drew is instead an almost completely alien artifact. Nancy's father (Tate Donovan) appears to be worried that Nancy is weird because she likes "sleuthing" instead of partying and baring her navel, although he doesn't think she's weird because she dresses like Donna Reed and acts like Lisa Simpson. They move to LA, into a mansion owned by a mysteriously-murdered Old Hollywood star (Laura Elena Harring), something done mainly to facilitate Nancy's pathological need to solve mysteries. (Fans of Mulholland Drive will get a bit of a post-modern tingle at Harring's turn as a Tinseltown phantom; and speaking of David Lynch, there's another director who presents the insidious intrusion of Eisenhower's America without irony.) In a series of deadly montages, Nancy establishes herself as an outsider: she thinks saving someone from choking is best accomplished by CPR and performs, out of nowhere (granted, everything is out of nowhere), an emergency tracheotomy on a peanut-allergy-stricken teen. Don't know what to think? Me neither. There's a big fight at the end where Nancy kicks someone in the nards after throwing herself out of a speeding car before saving herself from getting killed by talking about how messy each method of murder will be--and there're a lot of long, lifeless stretches so uncomfortable that the movie plays a little like Warhol.

Consider a scene where Nancy's milquetoast, sorta-love-interest Ned Nickerson (Max Thieriot) asks for a latte at a restaurant in Chinatown, to which the waitress responds, "Silly. There no ratte in Chinese lesteraunt!"--and wonder as I did what the joke is and who it is on. No easy answer there. It's not on the bumpkin, exactly, for thinking that every restaurant in LA serves lattes, because it hasn't been established in the slightest that these bumpkin characters have any preconceptions whatsoever about LA. It's not on the Chinese waitress because, hell, there really aren't any lattes in most Chinese restaurants. As there are no other cultural malapropisms of this strain in the picture, its appearance is--again--so alien that it's actually philosophically stupid.

Or consider the scene where harmless bimbo antagonist Inga (Daniella Monet) mistakenly identifies Ned and Nancy's hometown as "River Depths" rather than "River Heights," which is, again, impossible as a malapropism and therefore becomes an inscrutable ventriloquism of its creative team. The only way to read the film at all is as some moron's challenge of Thomas Frank's brilliant What's the Matter with Kansas?--as a contest between Reagan's 1950s utopian "flyover" country (referenced as such in the film) and the ocean of cess that surrounds its evergreen acres. Nancy is a representation of the essential can-do mythology that swaddles the Eisenhower presidency (her tools of choice being a string wrapped around a pencil and, um, an iPod), and her intrusion into the lost culture of pinko, blue-state California results not in her assimilation, but in the eruption of "the new sincerity." If it all washes out as cross-eyed badger shit, it only really enhances the rotten core eating away at neo-Conservative thought.

Far from too much to ladle on what is easily the worst film of the year, Nancy Drew can in fact be appreciated as the working metaphor for the Republican party in the middle of 2007 as the most unpopular President in history leads it to ignominy. It's a trainwreck and an ideological morass of ill-fitting parts and contradictory feints and bobbles, held together by some flickering ideal of innocence and good old American self-sufficiency in the body of a prim housewife shoehorned into the vessel of a sixteen-year-old girl in parochial schoolgirl duds. Not burdened by too much religiosity, at least, Nancy Drew nevertheless paints the divide in this country as clearly as if it were. Should this picture persist as a cultural artifact--and there's no reason on this sweet green earth for that--it'll persist hand-in-hand with discussions of this neo-Reaganism, the death of Jerry Falwell, the rising tide of discontent surrounding the Iraq War, and our atmosphere of punditry and intolerance. It's a movie about a little girl from the Fifties teaching little girls from the '00s about virtue by solving the love-child sex-murder of an icon from the Golden Age of Hollywood. It's also, in case you were wondering, bumbling, inept, annoying, obtuse, ugly-looking, badly-cut (by the editor of Glitter), and, on the whole, generally unwatchable. Originally published: June 15, 2007. 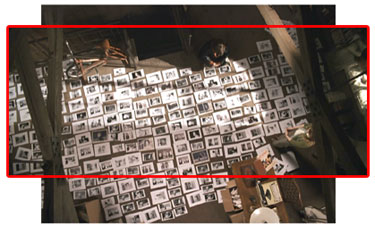 THE DVD
by Bill Chambers Warner brings Nancy Drew to DVD in another transfer lousy with compression artifacts, which has become something of a studio specialty. If they want people to switch to HiDef badly enough to sabotage their standard-def product (a conspiracy theory advanced, in fairness, mainly by us), they should at least have the courtesy to release everything on DVD and Blu-ray simultaneously à la Disney; in the case of stuff like Nancy Drew, one doesn't even have the option of switching to BD. Still, I've seen worse: while the 2.42:1 anamorphic widescreen presentation is unnecessarily gritty and choppy, it's not the sandpaper to the eyes that Unaccompanied Minors was. Overall, it looks a little flat, but has director Andrew Fleming ever made a movie that didn't? Shot in Super35, the film has been recomposed for fullscreen viewing in an alternate version located on the same side of this dual-layer platter--good luck getting it to play, though, as my copy defaulted to widescreen nine tries out of ten. As for the DD 5.1 sound, it's a functional rendering of a utilitarian mix; considering this was one of last summer's tentpoles (however ludicrous that may strike you), I was hoping for big audio dynamite that never materialized.

Extras include: "Nancy Drew: Kids at Work" (9 mins.) a perfunctory making-of featurette in which everybody pretends to have idolized the eponymous detective in their youth and we learn the curiously-disappointing truth that Emma Roberts is nothing like Nancy Drew off camera (although that Josh Flitter kid is every bit as creepy out of character); four, um, "mini-featurettes"--"Our iPod Idolatry," "Nancy Drew's Detective Kit," "Day on the Set," and "Emma's Last Day"--running approximately 2 minutes apiece, over the course of which we discover that Kelly Vitz has better taste in music than any of her peers and that Roberts sometimes cheated by writing her lines in Nancy's "clues" notepad; a "gag reel" (2 mins.) that plays more like the kind of B-roll montage prepared for a wrap-party; and the makeshift video for Joanna's "Pretty Much Amazing." Previews for A Dennis the Menace Christmas, Get Smart, Hairspray (2007), and the Nancy Drew soundtrack (featuring Flunk's excellent cover of "Blue Monday") cue up on startup. Why did Nancy Drew take nine months to come out on video? Beats me, though you'd think in all that time they could've devised a more substantial package than this. Originally published: March 10, 2008.