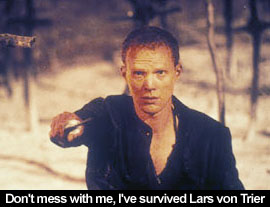 by Walter Chaw The problem with Tony Shalhoub's directorial debut Made-Up is a certain forced artificiality in presentation and execution that, though in keeping with the mock-documentary-within-a-mock-documentary format, makes the consideration of it emotionally and aesthetically removed. It's a slippery criticism to level at a picture that seems to be about emotional and aesthetic remove, of course, but there comes a point when the form imitates the message to an obfuscating degree--in other words, when it's no longer about the distance, but is the distance. So for all the empty extra-textual readings the film culls for its subtext (Brooke Adams, an actress out of the scene for a decade or so, plays an actress out of the scene for at least a decade; sisters play sisters; the daughter is played by the daughter of Susan Sarandon; and so on), Made-Up is salvaged by a sense of decency, and one meta-read that carries some weight as Shalhoub, an Arab-American of Lebanese descent, directs a film about the ills of stereotyping based on appearance.

Elizabeth (Adams) is talked into a non-surgical extreme makeover by her aspiring cosmetologist daughter Sara (Eva Amurri), and finds herself both the subject of her sister Kate's (Adams's real-life sister Lynne Adams) documentary and the object of interest for sheepish bar owner Max (Shalhoub, Brooke Adams's real-life husband). Seasoning the pot, it seems that Sara believes Elizabeth lost her husband (Sara's father), Gary (Gary Sinise), to sexpot Molly (Light Eternity--seriously) because Elizabeth refused to doll it up and wear a girdle. Issues raised concerning our obsession with appearance are raised just by the mention of the concept and not much elaborated by the picture, but what does intrigue in Made-Up is a scene that suggests Molly's favourite aphrodisiac is setting up a hidden camera before which she can better perform. Generally light-hearted (the only heavy-misstep involving a living art project engaged in by Sara that involves the tarting up of homeless women--all thankfully off-stage), Made-Up is sometimes ponderous, sometimes overly affected, but surprisingly effective if seen as something like a love note to the peculiar plate-spinning insanity of the family circus.

No such mediating factor forgives the medieval shenanigans of Paul McGuigan's whored-up take on In the Name of the Rose (itself no fresh Irish rose, come to think of it), crafting from the grand intentions of The Reckoning a dime-store bodice-ripper in which a game cast and some simply amazing production and art design are duly squandered. Disgraced priest Nicholas (Paul Bettany) is taken in by a troupe of traveling actors led by sad-faced Martin (Willem Dafoe) and thunder-voiced Tobias (Brian Cox), their nomadic wandering leading them to the keep of Lord de Guise (Vincent Cassel), where they perform a morality play to diminished returns. Seems parables in the time of plague is a devalued commodity, so Martin decides to stage a dark ages version of a documentary, chronicling a recent child murder in the small community. Hilarity ensues as it is wont to do in films about fey Frenchmen in period attire, sodomizing and murdering young men with the help of a mad monk as a gang of glorified troubadours put themselves on the case--all so that, initially, the company can bury one of their fallen members on hallowed ground.

An exchange expressing weariness at the prospect of performing "The Crucifixion" is one of those unfortunately timed things that results in uncomfortable titters in anticipation of some jackass defaming The Reckoning as anti-Mel, even as the progress of the picture from competently framed costume piece to odious ham contributes to the picture's lugubrious pace and foregone conclusions. The climax of the film is the very essence of anti-climactic (de Guise takes Nicholas in an intimate clinch after an endless theological debate) and followed by a denouement at once tacked-on and interminable. The Reckoning is all surfaces and pretensions bound together by prurient interest and a few convicted performances, while the irony is that the best parts of the picture are the parts that examine the conventions of the period stage. As de Guise's fortress goes up in flames, drawing together The Reckoning's multiple intimations of the coming tide of secular humanism (and dramatic re-enactments) in the conflagration of Promethean knowledge, what's illuminated is the essential emptiness of McGuigan's tin drums (see also: Gangster No. 1), and the futility of the picture's desire to, like the deeply flawed but at least earnest Made-Up, be about family, identity, and truth. Originally published: March 26, 2004.