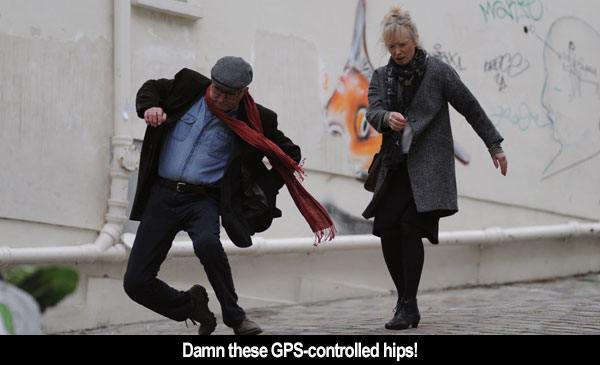 by Walter Chaw Nick (Jim Broadbent) has been fired from his professorship, and, not to celebrate but maybe to memorialize it, he and wife Meg (Lindsay Duncan) take a romantic trip to the City of Light. Well, a trip, anyway. After two awful films (Morning Glory and Hyde Park on the Hudson), Roger Michell returns to form (and to screenwriter/playwright Hanif Kureishi) with this bitter little pill, Le Week-End, whose title, read the way I think it was intended to be read, just drips with acerbic disdain. It reminds me of an exchange about midway through where a desperate Nick tells Meg that he loves her and Meg hisses, in a way that only a British actress at the absolute peak of her powers could hiss, "Love... DIES." Yet Meg doesn't hate Nick and Nick, for his part, isn't quite the milquetoast he presents himself as in moments like these, when he falls on the street and injures his knee to the ringing, castrating laughter of his mate, or when he infers that Meg wants to leave him and starts to whimper like a child. Also at about the halfway mark, the couple encounters an old colleague of Nick's, Morgan (Jeff Goldblum), who promptly invites them to a dinner party in honour of Morgan's latest literary success ("It could happen to anybody," he says; "It didn't happen to me," Nick responds), and suddenly Michell and Kureishi have the meat of professional and personal jealousy to worry off the bone, too.

Le Week-End is a dense relational drama indicated by tricky, wordy interplay and sharply-observed performances at times so uncomfortable that it begins to feel wrong--like voyeurism might, yes, but more like what it is to catch your parents in a moment of being human. It works, too, as a discussion of pride, of how the cult of masculinity demands its sacrifice in gouts of self-esteem and lies told to the self and others. For Nick and Meg, their empty nest and the end of Nick's career serve as catalysts to truth-telling, to giving voice at last to a lifetime's regret. Meg wonders what it would be like to learn a new language, or take a lover, so her pronouncement that the hotel they're booked into is "too beige" suddenly becomes autobiography. For his part, Nick speaks of his own sexual boredom, his envy, and the things that may have led to an infidelity in the past, here coming home to roost now that he's lost his position as "head" of the family. He's suddenly not so facile once he needs Meg, once he realizes that he may have taken her for granted all these long years. But Le Week-End is more complicated than just relational drama: Meg doesn't really want to leave or, at least, doesn't want to be left, and Nick, making a toast at Morgan's party, has an epiphany that looking back on his life near the end of it has shown him he is well and truly "fucked."

Best described as a romantic comedy, Le Week-End's romance is entirely unfiltered by nicety and convention; and its comedy is the chilliest kind. It reminds of a Harold Pinter play without the portent, or Linklater's Sunrise trilogy for the September set--a lost epilogue to Eternal Sunshine of the Spotless Mind, perhaps, with an aged Clementine coming back to the clinic to discover she already has a file there, thick as a phone book, of the times she's overlooked her immortal beloved standing right in front of her. It's wonderful for its refusal to allow anyone the easy path--even Morgan, all unctuous charm and ingratiating nothings, reveals that he's left his family for a woman half his age. If there's a grace note to the piece, a touchstone it returns to, it's encapsulated by a scene in which Nick, preparing to go out, catches the "Madison" sequence from Godard's Band of Outsiders on the television: After all the little rebellions, after switching to a room they can't afford on the Champs-Élysées, after running out on a ticket at an amazing restaurant, Nick and Meg (and Morgan) suavely recreate it, impromptu, at a cafe, finally finding beauty and grace in the imitation. This time spent with a remarkable cast, speaking a wonderful script at the hand of a steady director, is bracing and, in the end, alive and hopeful.