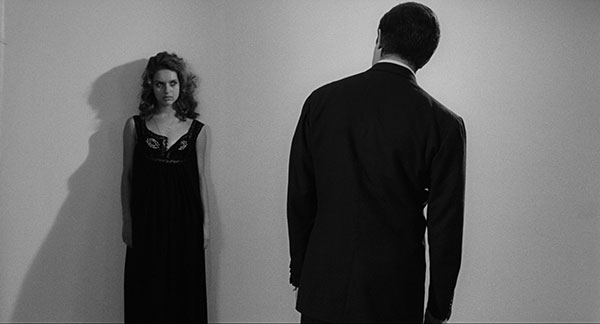 by Walter Chaw The second film in a loose quartet of Modernist, existentially-despairing--some would say brutal--Michelangelo Antonioni pictures, La Notte is the one I would identify, if pressed, as the best among L'avventura, L'eclisse, and Red Desert. I'd even go so far as to call it Antonioni's best movie overall: the one that most completely encompasses the filmmaker's worldview and puts into sharpest relief the tools with which he expresses it. He's at the height of his powers here. I would argue that although his Blow-Up both defined foreign film as a genre for American audiences (while proving instrumental in defeating the Production Code, heralding the level of acceptance and permissiveness that made the American '70s in film possible) and is indisputably his most influential work (indeed, it's among the most influential films of all time), it's La Notte that offers the cleanest insight into who and what Antonioni is as an artist.

La Notte feels very much like the first time I read "The Waste Land". In fact, it makes sense as a bridge between the Eliot poem and J.G. Ballard's The Atrocity Exhibition, pinging on Modernism's debt to Romanticism in one breathtaking sequence where a writer, insulated by a wall of books. is juxtaposed against his wife in a burned-out building, contemplating lost time in the layers of burnt wallpaper peeling away. (The pattern of destruction is echoed in her skirt--wonders!) The film is a series of vignettes that locate the artist in a liminal place between the Modern and the Natural: the artist as pilgrim in search of divinity in concrete valleys and rats' alleys, but finding there only divorce, desertion, spiritual emptiness. If there is a god here, it's Ballard's machine god--and if there's a modern analogue to the despair of the piece, it's David Cronenberg's adaptation of another Ballard, Crash. The prevailing mood is one of entropy. The first time I saw La Notte, I thought it dry and odd; each subsequent viewing has wrought fresh emotional surprises: depth charges of personal insight, paradigm-shifting moments of perceptiveness and observation.

Novelist Giovanni (Marcello Mastroianni) and his wife Lidia (Jeanne Moreau) wander through Milan and in and out along the fault lines of a marriage grown stale, players cocooned in separate chrysalides to metamorphose into things that are less. It's science-fiction in the Ballard sense: a tale of identity, time, and space. Giovanni laments that he's lost touch with his instrument. He looks outward for affirmation that his work is good and has meaning. The creation of it, in and of itself, has lost its sacredness, and Antonioni mirrors his barrenness in Lidia's futile attempt to comfort a lost child. Perhaps it's their childlessness; perhaps it's her own innocence. Giovanni considers taking a job with an industrialist at a party, a precursor to the "plastics" sequence in The Graduate but, more, a hint of the Gertrude Stein-ian places Godard will take the consideration of language in his Alphaville. Repeatedly, Antonioni brackets, captions his author with dead words: in a party scene where he encounters his name on the spine of a book; with the chattering of admirers who idealize the role of author as creator. When the industrialist does the same, privileging the artist above the manufacturer, Giovanni pushes back. He sees the creation of words as equivalent to the production of objects. Giovanni is dead inside, and that death is reflected in his somnambulance. Later, he and Lidia stroll into the park we will return to in Blowup, stiff-legged, expressionless, like zombies, yes, but more like the pod people of Philip Kaufman's Invasion of the Body Snatchers. Before that, Giovanni is "seduced" by a nymphomaniac (Maria Pia Luzi) after visiting a mortally-ill friend in a hospital/sanatorium. Her lust underscores his dispassion. She needs to be held in check, while he operates, it seems, on invisible waves of lazy eddies and long doldrums. Lidia, in a bath, asks for a sponge, and he delivers it. She stands up and he drapes a robe over her. They go to a nightclub for a salacious show, a Josephine Baker sort of thing that works as shorthand for lust, and Giovanni mutters "not bad." Lidia intimates she's had a thought, but for later, later.

La Notte is about losing the thread, about dying inside and being lonesome in crowds. It's about Modernism, too, in the sense that there's a crying-out throughout for divinity to lend meaning to the past and hope to the future. The film lands on the idea that there may be no God, but there is love, whether or not that love can only be accessed through art created in ecstasy. Even if that art, as rare as it ever was, is increasingly commodified: sucked dry, vampirically, by the ways we consume it. La Notte's final third is set at a party in the industrialist's home. It's here that Antonioni finds a rhyme for the visuals of the film's first third as Giovanni discovers the industrialist's daughter, Valentina (Monica Vitti), his profile reflected, transparently, through a glass wall. It's not clear initially if he's looking through something at her, if they are indeed sharing the same space, but Antonioni's made the decision to shoot it in reflections (and what is the picture's thesis but that we're all ghosts haunting our regrets?). In either case, it's visually striking and clear for really the first time on Criterion's Blu-ray release. There's flirtatious banter; I found myself leering at Valentina in her spaghetti-strapped black dress, wanting her to lean forward into the game--an interest shared by Giovanni in his words, if not necessarily communicated by his actions. Then, just before their dalliance is discovered, he reaches down to touch her shoulder, and the only light in the scene reflects off his wedding ring. Lidia, for her part, gets into a car with a would-be lover. They drive off in a cloudburst and through patterns of light and dark; we see, but can't hear, the excitement of their illicit coupling wilt into Lidia's realization that she doesn't want a physical indiscretion. What she wants is to read her husband something he wrote back when the product of his hand was the product of his heart.

La Notte considers the importance of the artist and the struggles he faces in a world that no longer values art--the artist's connection to the divine, even as his product is taken from him, repackaged, misinterpreted, and sold to audiences ill-equipped to appreciate it. He's told he's lucky to be financially successful. He's told this enough times that in the end he considers getting a job in manufacturing, because that's what success looks like. It's about living with an artist and allowing oneself to be subsumed in importance--about forgetting what it was that makes living with an artist so intoxicating, that connection to the sublime, and what happens when the artist loses the connection, first to it, then to you. It predicts the revolution in art, locating itself among those key films of 1961 (like The Hustler, The Misfits, Yojimbo, Splendor in the Grass) that led the charge to look inward, to announce that movies were the product of individual artists. In its way, La Notte is the clearest statement of the dangers filmmakers face as they achieve success, or don't, in their chosen medium. At the end, its magic is that it's a dense, oblique at times, text (like Godard's films), but in its offering of a choice for the human soul, encased in concrete and metal and glass though it may be, there's real humanity to it (like Truffaut's films). You could argue that later Antonionis begin to remove that choice--begin to suggest, in movies like Zabriskie Point and The Passenger, that it's too late, that modernity has killed the artist, or that post-modernism has declared that the only thing divine is our desire for it. But La Notte, in its meticulousness and precision, in its staggering psychological complexity (matched by career-best performances from Mastroianni and Moreau and Vitti), its melancholy and lovely dialogue, and its gorgeous cinematography, which rivals anything in the Bergman/Nykvist collaboration... In all of these things, it lands as one of the truly great achievements in Modern art. 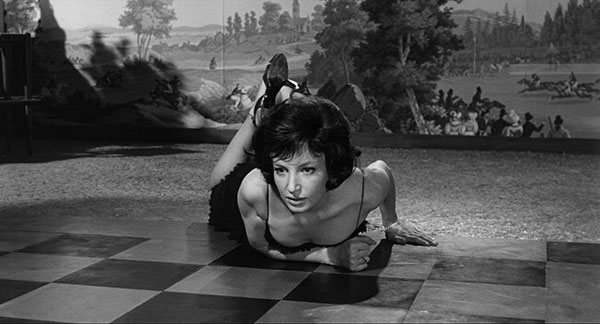 THE BLU-RAY DISC
Criterion brings the 4K restoration of La Notte to next-gen in a stunning, sumptuous 1.85:1, 1080p transfer that invites a deep-dive appreciation of the film. Look at the rainstorm in the third act--not the torrent itself, but how it peeks around the edges of Giovanni framed in a doorway, peering in. Better, look to the moment of the wedding-ring glint; I'd never been able to see that detail before. Or the way that Luzi's eyes flash, or the absolute clarity of the titles in the author's book collection... There's newfound depth to the presentation, too: one can monitor the subtle changes in the friend's mother's expression when she's offered, in the background, a cup of champagne to perhaps celebrate her son's imminent death. The film is presented in its original dubbed Italian via a surprisingly loud 1.0 LPCM soundtrack, drawing attention to an impressively crisp platform for one of Antonioni's heavily-diegetic mixes. There is a score, however (by jazz-man Giorgio Gaslini), and it sounds wonderfully warm.

"Adriano Apra and Carlo di Carlo" (28 mins., HD) gathers a critic and a historian to discuss Antonioni the artist as a whole in addition to the film in question. Though fairly light in terms of overview, it does a good job identifying key sequences--Lidia's lonely walk, in particular--that feed a greater understanding of La Notte while successfully locating it in a larger conversation about world cinema at that moment in time. Apra and di Carlo are well-spoken. "Giuliana Bruno" (30 mins., HD) is a close examination of the filmmaker's mise-en-scène courtesy a Harvard prof schooled in architecture and composition. It's from this segment I took much of my appreciation of first Giovanni and Lidia's apartment, then the dinner party, with its glass walls and, fascinatingly, checkerboard floors. I was reminded a time or two of Hitchcock's own gameboard designs--most notably for Notorious--and I was gratified to not feel alone in that comparison. The Criterion booklet provides a keen overview of La Notte by Richard Brody in Brody's staccato style. Like most Criterion essays, it's light but essential reading. Also included is a short newspaper article by Antonioni himself, who talks about the genesis of the project and uncovers a connection to not just contemporaries Viridiana and Luis Buñuel (who would cover similar territory a decade or so later with The Discreet Charm of the Bourgeoisie), but also Fellini's terrific Nights of Cabiria in Antonioni's initial desire to cast Guilietta Masina as his female lead. What a companion piece that would have made--I'm not certain my heart would have ever stopped breaking. A HiDef trailer rounds out the presentation proper. 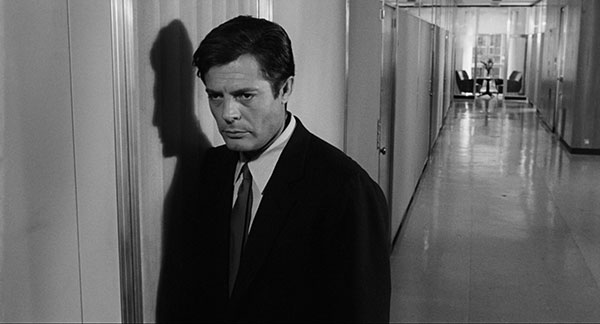 My absolute favourite Antonioni film. Every time a rep cinema is showing a print in TORONTO, I clear that part of my schedule to get lost in this film. The 'endless fever-dream night' as a genre in cinema (i.e After Hours) is also one of my favourites.