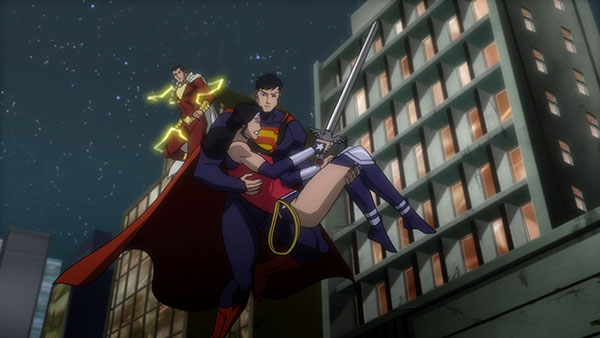 **/**** Image A- Sound B Extras A-
screenplay by Heath Corson, based on the graphic novel Justice League: Origins by Geoff Johns and Jim Lee
directed by Jay Oliva

by Jefferson Robbins The red underwear is gone, and with it, all humility. Justice League: War marks the first true animated appearance of Superman and the rest of the DC Universe heroes since the comics publisher's New 52 gambit launched in 2011, resetting at least twenty-five years of pulp history.¹ What that means for viewers is a militaristically-clothed Superman (vocal chameleon Alan Tudyk) who threatens to choke people to death and a dangerously naive Wonder Woman (Michelle Monaghan) who's definitely going to have sex with him after the credits. This, effectively, is the characters' debut. Set aside all those past versions you know, toss out even the previous direct-to-video titles you may have collected (including four "Justice League" movies) since the DCU animated line officially launched in 2007. This is where the Justice League meets--and where we meet them--for the first time. And, boy, are they a bunch of pricks.

Strictly for the adult fanboys who are now DC Comics' best customers, Justice League: War welds its solo heroes together in another raid on Jack Kirby's legacy, fighting off a planet-wide invasion from 24-foot-tall cosmic villain Darkseid (Steve Blum, bellowing into a vocoder). The movie adapts the arc written by DC's main comics-to-film guru Geoff Johns, substituting Shazam (Sean Astin) for Aquaman--and I'm confused, as now he's called "Shazam" instead of "Captain Marvel," which you can sort of understand because Marvel Comics also has a Captain Marvel, but that means Shazam goes around introducing himself by his magic word, "Shazam," without transforming back into smartass orphan Billy Batson (Zach Callison). I'm overthinking this, aren't I?

Because it's really all about the Big Punching. Sure, there's a grasp at human interest in the manufactured daddy issues besetting Cyborg (Shemar Moore), but director Jay Oliva is known from past DCU productions as a capable helmer of explosive segments, not touchy-feely stuff. He acquits himself perfectly well with the wall-to-wall devastation wrought here--although by the time Darkseid chases the Flash (Christopher Gorham) around Metropolis, smacking the pavement like a giant baby, it's just a chuckle. Justice League: War isn't the best-written comics-to-screen crossover, with Heath Corson offering klunky dialogue transitions ("Alien? You mean like that guy in Metropolis?") to frog-march the plot along, but he's perhaps hampered in the source material from Johns, one of the most simplistic writers in the graphic field. The injection of Shazam, if we are indeed calling him that now, does offer some lightheartedness to help damp down the dust clouds, and he gets both the best line in the film and a metatextual homage to Mean Joe Greene's Coke commercial.

The ultimate end of all this property damage is to win over the public--both the viewers and the fictional citizens of the DC Universe--to the new heroes. Troublingly, none of them seem to have much interest in partnering nor in being broadly accepted. Green Lantern (Justin Kirk) is a showboating egomaniac, while Wonder Woman waves her sword around at innocent ice-cream vendors.² Aside from the milquetoast, forgettable Flash, the only hero not significantly dickified is Batman (Jason O'Mara), who's spent the last two decades being a dick to his fellow Leaguers in every cartoon and comics incarnation anyway. Somewhere along the way, this character became the untouchable baseline for DC, simultaneously lesser yet better than his superpowered fellows. It's his brand of darkness that's infected the broader comics universe, crowding out the just-for-kids fun, yet he's still here, shaking his pointy-eared head at the whole affair. That's kind of cool, but also kind of sad. 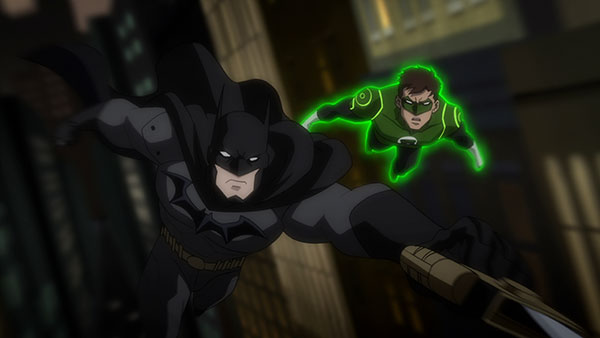 THE BLU-RAY DISC
Explicitly designed and coded for home video, Justice League: War offers a visually solid 1.78:1, 1080p presentation that won't surprise but doesn't disappoint. Note the hues and shadings applied to the characters' new costumes: There is very little vivid Old Glory red, white, or blue, but rather a subtle range of all those colours. The dominant blue of Superman's costuming leans more towards navy, in fact. This marks both the shifts in the characters and an adept handling of the film's palette. Oliva and his design team lay on a soft focus for the various backgrounds, meant to indicate depth of field but at times--especially in fast pans of the "camera"--mistakable for a transfer flaw. I have no doubt it's intentional, given that MOI Animation used the same lacy aesthetic on past DCU entries like Batman: The Dark Knight Returns (which Oliva likewise helmed) and Superman: Unbound. The 5.1 DTS-HD Master Audio mix keeps dialogue distinct and even amid rumbles, roars, and pummellings, with subwoofer and rear channels performing impressively when superhumans start trading blows. Monsters in flight go screaming across the soundscape on the attack, and the multiple instances of electronic noise--Cyborg talking to a Mother Box, for instance--wash through on otherworldly frequencies. The music by Kevin Kliesch receives its due as well, though sadly, his work is not a patch on that of Christopher Drake, last heard on the Dark Knight Returns two-part project. If Drake doesn't return to the DCU fold, it's a loss to the franchise.

For extras, DCU skips its typical full-length commentary in favour of a set of arguably more informative featurettes. "From Animatic To Pencil Test" (24 mins., HD) lets Oliva educationally plumb the process of designing and drafting a cartoon epic, highlighting the interchange between domestic creators and the overseas production houses that infuse static drawings with life. "Deconstructing Justice League: War" (21 mins., HD) is a sit-down between Oliva and original graphic novel artist Jim Lee, a comics hero since the '90s revolution, to watch key scenes from the movie and assess where they diverge from Lee's work on the page. For one, naturally, the film characters are just the vaguest outlines of Lee's art--the slope of a cheek here, an armoured shoulderpad there. There's no way animation can capture the kind of crosshatch energy the artist sets down in his pencils. Lee's the hero of "Creating Heroes: The Art and Life of Jim Lee" (37 mins., HD), which is awash in lovely samples of his work while underlining the stress he wrought in his very traditional Korean-American family when he sought to make comics art his career.

DCU continues to mine its animated back catalogue with 90 minutes' worth of previous cartoons "From The DC Comics Vault," all sadly mastered in standard-def despite the recent vintage of most. Darkseid menaces "Justice League Unlimited" in "The Destroyer;" Captain Marvel teams up with the Caped Crusader and Kamandi in an entry from "Batman: The Brave and the Bold" (a show actually available for HD viewing via Blu-ray, adding insult to injury); and two episodes of "Young Justice" find the heroes' descendants again battling cosmic hordes. A 9-minute, HiDef sneak peek offers insight into the forthcoming Son of Batman, excavated from a popular Grant Morrison storyline. Thankfully, Jason O'Mara gets a second shot at voicing the Dark Knight there, so far proving an able replacement for generational favourite Kevin Conroy.³ DCU series producer and sometime director James Tucker, co-exec producer Alan Burnett, and comics heavyweight Mike Carlin throw in their pitches, and between the three of them I count three different pronunciations of "Ra's al Ghul." Still...Morena Baccarin, bro! Man-Bat! Startup previews also spotlight Son of Batman, in addition to The LEGO Movie; there are optional trailers on board for "Beware the Batman", Scooby-Doo! Wrestlemania Mystery, "Teen Titans Go!", and the video games "Infinite Crisis" and "LEGO Legends of Chima". The accompanying DVD offers the film, shorn of extras but with a soupçon of added language and subtitle options, including Chinese, Portuguese, and Thai. Here's where you get your UltraViolet copy, too. Follow Jefferson Robbins on Twitter 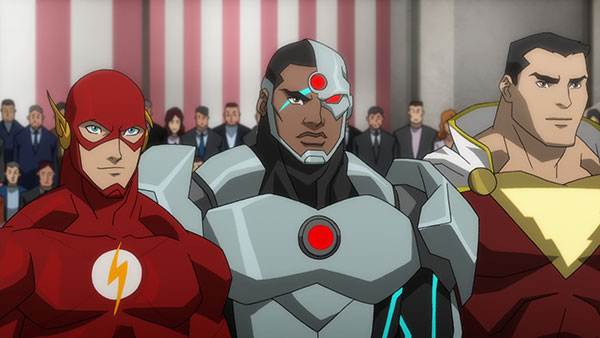 1. The last major Year Zero being 1986, with the "Crisis on Infinite Earths" crossover miniseries that overwrote the prior fifty years of continuity. return

2. There's a gesture towards empowerment in how Wonder Woman uses her lasso of truth to force a confession of cross-dressing from a male harasser, but ultimately she's the one with all the power--the one doing the bullying. return

3. A few disheartening notes on casting: On the main feature, long-time Superman voice George Newbern is reduced to playing Steve Trevor, merely a Baxter in l'affaire Superman-Wonder Woman. Ioan Gruffudd, once a headlining star, is way down the list voicing someone named "Thomas Morrow," a character I couldn't even identify. return

So, basically, this is the movie version of why I stopped reading comics?