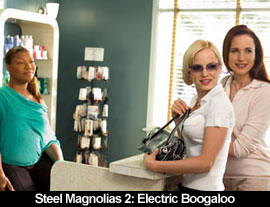 by Walter Chaw Taking a cue from his own surprisingly poignant Barbershop 2, director Kevin Rodney Sullivan's Guess Who, a contemporary inversion of Stanley Kramer's proselytizing dinosaur Guess Who's Coming to Dinner, surpasses expectations by presenting a trio of characters in various scenarios that actually offer some pithy commentary on race relations in these United States. It's a formula flick, make no mistake (one whose basic premise was mined as recently as Meet the Fockers), but in-between its usual glaring dad/fumbling beau gags, Sullivan takes the time to give each of his pairings moments of genuine connection.

A scene, already derided, where Bernie Mac's evil father-figure Percy--honed by Mac on his television show and essentially recreated here in full (while also dredging up the memory of the late, and gentler, Robin Harris)--encourages Simon (Ashton Kutcher), the white fiancé of his daughter Theresa (the stupid-beautiful Zoë Saldaña), to tell racially-charged jokes at the dinner table, is a beautifully timed and executed look at invisible lines and the difficulty of knowing when they've been transgressed. It's a little like a non-native speaker trying to distinguish similar sounds in Chinese--and how refreshing that the conversation this time doesn't revolve around whether or not the cracker homeboy is allowed to say "nigger." Another moment where Simon and Percy share an uncomfortable car ride during which every song on the radio seems to be pimping racial harmony strikes a different kind of chord, certainly a more pleasant one than the undercurrent of homophobia that currently transcends the black/white barrier.

There's a lot of wisdom in Guess Who, much of it stemming from an understanding that African-American filmmakers are often their own worst enemies when it comes to projects funded by white moneymen to appeal specifically to a black audience. It resists broad stereotyping (the white guy actually, and subtly, teaches the black guy to dance--and the black guy likes NASCAR) and, better, it needles the black community's own set of preconceptions and prejudices against white folks. Though Simon's a bit stiff, he has a reason that runs a little hotter than skin deep, leading to a late-film revelation as to why Simon's lied to Theresa about getting canned from his high-profile position that feels, of all things, heroic.

A frank, realistic conversation concerning the hardships faced by interracial couples is handled with seriousness and eloquence, and there's a late-night rendezvous between the two lovers that turns into not a sweaty paw, but a walk around the old neighbourhood as breathless as a scene out of the old Hollywood romance the Kramer original never was. Guess Who resists, at almost every turn (except, unfortunately, its terrible sing-along conclusion and epilogue), the easy way out of its old conundrums--you find yourself wishing that it wasn't as chained as it is to convention so that the interplay of the characters might move closer to the proscenium. Far from a masterpiece, far from perfect, Guess Who is nonetheless a pleasant surprise from a director who's beginning to earn a feeling of anticipation.

Queen Latifah's spin-off of the Barbershop franchise, Beauty Shop, is another film crippled by convention yet able to, once in a while (if less often than Guess Who), shine through with true observations about how blacks and whites do, and don't, get along. Homosexuality (here embodied by Kevin Bacon's Martian eurotrash hairdresser--what, Bronson Pinchot was busy?) is again the common whipping boy both races can safely flagellate, but it's offset this go 'round a little with a strong feminist subtext that finds Latifah's Gina striking forward with a vibrant entrepreneurial pluck. It's a great pity that Beauty Shop too often tackles its thornier problems with a shrug and a cut to a later date where all her problems have magically been solved by elves, I guess, or Ty Pennington's do-gooder army of insufferable home-decorating gurus (for an unhealthy dose of class/race baiting, tune in to any episode of "Extreme Makeover: Home Edition")--but, putting it apart from Guess Who, the film is a lot more interested in setting up its conflicts than it is in resolving them.

Gina has a miracle conditioner and a hairy thumb (seriously, what's the analog to "green thumb"?), and so she breaks free from her horrific boss Jorge (Bacon) to open her own salon. Like Guess Who, there's a little something about needling black folks for their prejudices against white folks, and a little something about a loan (loan officer Percy has a brilliant aside about his clients, while Beauty Shop's Gina accuses a white loan officer of discrimination). A classic scene that would, traditionally, set up the black-outrage diatribe (In My Country, for instance, based an entire film on these set-ups) is paid off in Beauty Shop with the white "oppressor" delicately, and correctly, chiding Gina for playing the race card in an inappropriate, reactionary fashion. It's the first moment that made me sit up and take notice, made me reassess the picture in terms of one with aspirations beyond racial slapstick and cheap Maya Angelou jokes.

A pint-sized neighbourhood letch, Willie (Lil' JJ), justifies the investment. Armed with a video camera and dreams of making a music video that apparently will consist entirely of shots of women's asses, filmed on the sly, Willie is taught a couple of lessons in what it means to respect a woman; meanwhile, a subplot that involves Darnelle (the suddenly stupid-beautiful Keisha Knight Pulliam, a.k.a. Rudy Huxtable) learning to respect herself enough not to go out with the wrong kind of guy offers the insight that Beauty Shop doesn't come down to black power or female empowerment, but human dignity. Less said about Alicia Silverstone's Georgian accent (which makes her mouth mealier than Drew Barrymore's (that, you'll agree, is dangerously mealy)), Mena Suvari, and Andie MacDowell (every word that these three white women say sounds like a keening outtake from "The View"), the better--I'm inclined, after all, to like this movie. Originally published: March 30, 2005.