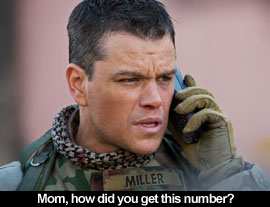 by Ian Pugh Sucks for Green Zone that it's being released the weekend after The Hurt Locker won the Oscar for Best Picture, which only makes the former look that much more antiquated. Paul Greengrass can still stick a couple of actors in front of a computer and perform those "shaky-cam" action sequences with the technical proficiency we've come to expect from him, but as proficiency is the only thing he has going for him this time around, it appears the director has finally run out of new tricks. Green Zone feels like a self-conscious relic of the previous decade and there's nothing to convince us of otherwise, particularly because it applies tired aesthetics to an impotent tirade about the American invasion of Iraq. At its best, the picture suggests an extraneous coda to the Greengrass-completed Bourne trilogy, without the benefit of its mystery, its forward momentum, or its looming implications. It immediately, unwisely lays everything out on the table for you--The Bourne Ultimatum without any damned ultimatum. The film Green Zone reminds of most, however, is former Greengrass collaborator Tony Gilroy's Michael Clayton: it's so consumed with stating the obvious about corruption in the system that it fails to recognize this is hardly a newsflash. While Greengrass and Gilroy are smart guys, I'm starting to wonder if they can only work miracles together.

Say this much for Green Zone: it leaps at the opportunity to pluck metaphors from the real-life events on which it's based. With Saddam on the run, the American target du jour is the villainous al-Rawi (Yigal Naor), a top-ranking general who supplied the U.S. with information about his country's (dismantled) WMD program once he was promised "a place in the new Iraq"--only to see himself become the Jack of Clubs in the '03 invasion deck. The infamous playing cards receive quite a bit of lip service because this whole war thing was all a game, see? And when warrant officer Roy Miller (Matt Damon) stumbles onto al-Rawi's hideout, he spots two lackeys wandering outside, "one carrying a briefcase, the other an AK-47." Diplomacy and violence--the twin weapons of war that just so happen to be the forces Miller encounters in his subsequent investigations! The point is that Miller has gone on several missions based on false Intel, all in search of those pesky weapons of mass destruction. So when he decides to find out what's rotten in the state of Denmark, he must choose whether to ally himself with CIA liaison Martin Brown (Brendan Gleeson, his Irish accent peeking through at the worst moments), who still wants to broker a deal with al-Rawi to prevent civil war, or with Pentagon thug Clark Poundstone (...and featuring Greg Kinnear as himself), who just wants al-Rawi dead before he can start talking in public.

It's both relevant and irrelevant, and it's not about exposing the truth because the truth is painted on the wall. You can nod in agreement or shake your head in disgust when the film prompts you to do so, but where does that get you? Seven years after the fact, the outrage and atrocity are too self-evident to sustain drama. Filmmakers like Kathryn Bigelow have moved on to talk about what the war does to us, as individuals and as a culture; Greengrass and Green Zone have no such concerns. There's meanwhile potentially fresh material to be mined from contemporary journalism and its hand in the conflict, but the long, disappointed stare the camera eventually accords WALL STREET JOURNAL correspondent Lawrie Dayne (Amy Ryan) is the film's first and last word on the subject. As President Flight-Suit's "Mission Accomplished" speech already stands as a grave miscalculation from people far from the action, do you really need to use it as the backdrop for a pleasant dinner with Washington bigwigs? The imagery is simply too blatant to be effective, and in the middle of it all is Damon, stuck in another Invictus scenario whereby he's merely an empty vessel to carry out a formulaic agenda. The only real revelation of the piece is Miller's ersatz translator, a bitter Imposed War vet nicknamed "Freddy" (Khalid Abdalla) who accidentally becomes the most important character because the film consciously regards him as a pawn in Miller's quest for the truth. It's easily Green Zone's most affecting statement, how even righteous indignation can lock in step with a never-ending chain of command, ordering the lower dregs to shut up and do their jobs. It's enough to understand that, to a point, Green Zone is right to indulge in discussions about the hierarchy of lies and ignorance that got us into this mess--they need to remain in the popular conversation. And yet, as in his United 93, "what now?" is a question Greengrass never deigns to broach. Originally published: March 12, 2010.