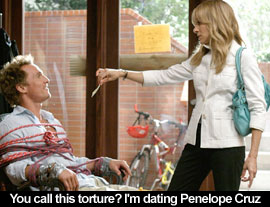 by Walter Chaw Starring professional unctuous petroleum spill Matthew McConaughey as Tripp, a carefree stallion still making a stable of his parent's house, Tom Dey's excruciating Failure to Launch is two things and both of them suck: a romantic comedy and a boorish fraternity slapstick, mashed together like a jumped track mashes together train cars. When Tripp is ready to break up with a girl too interested in something resembling an adult relationship, the modus is to screw her at his place and hope that his folks walk in on them. So what do his adoring parents (Kathy Bates and Terry Bradshaw: she's not naked this time, he is--let's call it a draw) do but hire an unctuous tan line named Paula (Sarah Jessica Parker) to pretend to be his girlfriend? Yes, they get their boy a whore, who, in a particularly uncomfortable scene in a particularly uncomfortable film, mumbles her way around an excuse as to why she's fucked her client to keep him from breaking up with her. Now that's professionalism for you. (At least in The Wedding Date, the jane had the decency to pay for her own escort.) If you don't think it's loathsome when the Bradshaw character, ogling Paula, says, "I'm payin' fer it, I'll stare if I want to," then have I got a movie for you.

All this is so very "Sex and the City", thus, to appease the young male demographic for whom "Sex and the City" is like a barium enema (let's face it, it's no holiday for any demographic), Dey and company insert a series of slapstick vignettes involving Tripp being attacked by a chipmunk, a dolphin, and a lizard, thereby rendering the picture thoroughly unwatchable for everyone. There's unresolved tension over which one is the more irredeemable miscreant in this mess, and there's a strange revelation that Tripp (who has never moved out of the house, we're told) is actually not a parasitic, arrested loser sucking like a barnacle to the ample undercarriage of his clueless kinfolk, but actually a soulful huckster still mourning the death of a sainted girlfriend. This allows for the introduction of a precocious "nephew" character to dispense cherubic wisdom like a play-doh factory while unsuccessfully ghosting Tripp every bit of the soulfulness his character does not otherwise earn. Of course this "nephew" is black.

Other sidekicks for Tripp include a pair of affable, invisible, wallpaper ne'er-do-wells; for Paula, we have deadpan nihilist Kit (Zooey Deschanel, doing this role now around the clock), who will, of course, fall for one of Tripp's buddies after he gives the kiss of life to a mockingbird. The description would fit a work of surrealism, and that's because there's so little energy in the production, so much desperation in its obvious recorded-in-a-coffee-can overdubbing, late rewrites, and other sundry post-production panic button quick-fixes, that its seams show in every old-person sexuality joke and impossible to reconcile paint ball sequence. There's a bizarre attempt to make sense of the two halves late in the game, something to do with why otherwise tame wildlife (like Parker) would suddenly attack toothy Tripp, but all this succeeds in doing is to introduce another exhibit into the mounting evidence that Failure to Launch is a badly-calibrated geek button for an audience of sexualized children. If you listen closely, you can almost hear the colossal failure crank grinding--and the great tragedy of it is that this film has its audience, didn't cost much to produce, and will justify its own existence financially, guaranteeing iterations of exactly the same kind of feckless malfunction again and again. You can glimpse eternity in this thing (or at least a hint of your own mortality), and if it's not the worst movie I've ever seen it's only because intimate knowledge of its endless ancestors and inevitable offspring resists the sweet refuge of hyperbole. Originally published: March 10, 2006.