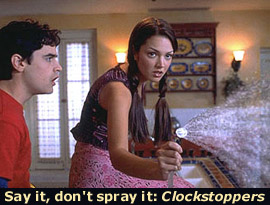 by Walter Chaw Taking for granted that it won't make any kind of scientific sense, Clockstoppers doesn't even have internal coherence. It is a mess by committee listing no fewer than four writing credits and possessing at least that many logy regurgitated premises in its mercifully brief (but still bloated) running time. Clockstoppers is the offspring of a fifth season "Twilight Zone" episode called "A Kind of Stopwatch", in addition to the mid-Eighties teen whiz kid romantic comedy adventures WarGames, The Philadelphia Experiment, Back to the Future, and Zapped!: it robs from each entire scenes while trying unsuccessfully to blend in a long sequence showcasing DJ's and raves, the inexplicable teen movements du jour. The only thing that Clockstoppers doesn't seem to have borrowed from its predecessors is a sense of humour and a kernel of intelligence.

Insouciant teen Zak (23-year-old Jesse Bradford) has a contentious relationship with his professor dad (Robin Thomas), an underwritten friendship with his token black friend (Garikayi Mutambirwa), and a budding romance with Venezuelan teen siren Francesca (28-year-old Paula Garcés). Clockstoppers, in other words, doesn't have any characters. It compounds its alarming lack of recognizable humans by adding French Stewart to the unquiet stew as a crackpot genius who invents a time-stopping digital watch for an unidentified corporation. To start the film, Stewart mails a prototype to his mentor (Zak's dad, natch)--and, naturally again, Zak lifts the watch and cavorts around town impressing his Latin hottie with cheap pranks. To link the scenes together, we get a lot of irrelevant transitions involving Zak doing BMX tricks on his bike.

The first third of Clockstoppers is an interminable high school comedy ending with a DJ showdown, the second third of the film is Zak on the run from evil corporate drones led by Michael Biehn, and the final third of the film is an infiltration of the evil corporation ending in a ludicrous action sequence and capped by a Back to the Future resolution involving a shiny new car and a nubile young lass. As you can see, Clockstoppers doesn't have any plot. The picture is a collection of clichés and conveniences ritually performed by a cast of the same. It's not one formula, it's a lot of formulas mixed together in a big banal pot.

Worse than all that narrative laziness, Clockstoppers makes the mistake of attempting a hackneyed scientific explanation of the time-stopping device ("It speeds up your molecules!") without also attempting to justify how such a thing wouldn't result in the combustion or disintegration of the subject, or how it would change the subject's perception of time. Neither does it address why the friction of movement wouldn't kill them, how baths of liquid nitrogen would fail to burn or kill them, or how conventional projectile weapons would work against antagonists in "hyper-time." The mistake isn't just in Clockstoppers' desire to have a basis in possibility, but in its general inability to follow the logic of the world it creates.

The film is a sloppy, discombobulated mess that mistakes loud skate punk music for character development and prosaic special effects for a narrative. Clockstoppers is, however, the most well meaning and scatology-free of the recent spate of made-for-teen movies--a fact that in of itself only means that the bad taste that lingers from the picture stems from bored disdain rather than disgust. Originally published: March 29, 2002.