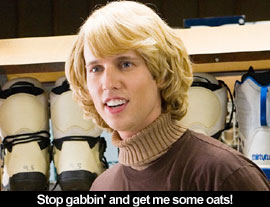 by Walter Chaw A goodly portion of Will Ferrell's fame has to do with his complete comfort with his body and sexuality. No surprise, then, that Blades of Glory's one-trick pony is straight men doing gay things in what is widely regarded as the gayest sport at the Winter Olympics. Not necessarily that figure skating is dominated by gay men (aside: isn't it?), but that the sight of men in spandex and codpieces pretending to be swans is uncomfortable for great swaths of middle-America and thus subject to ridicule and hatred. The first shot of the film suggests the divide as little Jimmy MacElroy (Zachary Ferrin as a child, the untalented Jon Heder as an adult) joyfully Salchows on an ice rink segregated from the "normals" playing hockey below. Recognized for his nascent useless talent, he's adopted by a megalomaniacal millionaire (William Fichtner in too small a role) who grooms little Jimmy into an Olympic champion whose only rival on the ice is portly sex machine Chazz (Will Ferrell). When the two get into a fistfight on the awards stanchion, they're banned from competing in their division--leading, of course, to their decision to return to glory in the pairs division. I'm not suggesting that Blades of Glory is hateful, really, so much as facile and easy. If you think Ferrell not wearing much as one half of the first man-man figure skating team is hysterical, and if you consider the gag of straight men touching each other's groins for the sake of a spectacle that's already beyond parody to be comedy gold, then have I got a movie for you.

For everyone else, Blades of Glory is exhausted and riddled with bad timing. The biggest laughs to a one have to do with crotch- punching or grabbing; meanwhile, Jenna Fischer is so tragically miscast as Jimmy's (?!) love interest that the actress's ability to make you feel winsome slices right through the artifice of the film. (Fischer plays her character's sadness so true that it's excruciating.) Will Arnett and Amy Poehler are straight-jacketed into roles that are beneath them as the incestuous brother/sister pair opposing the MacElroy/Chazz duo, and Craig T. Nelson reprises his coaching shtick in scenarios that serve mainly to remind unfavourably of the classic SNL skit with Martin Short, Christopher Guest, and Harry Shearer playing the genesis of the world's first all-male synchronized-swimming team. Everything about the film is half-hearted, timid, reeking of missed opportunities. If its aim was to be offensive, it's not offensive enough. It doesn't help that it lacks the subterranean brilliance of Talladega Nights (which features its own gay character, for instance, there to skewer the essential homophobia and anti-intellectualism at play in the veneration of organized sport); it lacks even the conviction of the tedious Anchorman, which at least went after a target with a few chinks in its armour. How much creativity does it take to write a handful of gags about two men acting gay? Blades of Glory's jokes are so obvious that a roomful of drunken frat boys at typewriters could have--and indeed appear to have--penned the script in one pass.

Issues of overbearing parents "breeding" sports heroes in a fame-obsessed society, of discrimination, and of the dreadful toll of said competition on the sanity of weak minds are, despite a cameo by Nancy Kerrigan, completely ignored, much less played for insight or chortles. Blades of Glory seems to come from some alternate universe where poking fun at male figure skaters for being fey is an act of great brilliance; it's a cynical money-making vehicle that doesn't care if it's undercooked because it's going to be the top-grossing film in the country for a little bit based largely on Ferrell's appeal and the promise that puerile gags and damaging stereotypes will be indulged for appreciation in the company of like-minded folk. (Though half as scary, it shares a lot of similarities with the impulse that pushes thousands of people to public events headlined by Ann Coulter.) With all that, the only thing truly offensive about something like Blades of Glory is that it doesn't try very hard because it doesn't have to--and that millions will line up for it because nobody gives a shit whether anyone's trying as long as the movie meets its quota of groin jokes. Originally published: March 30, 2007.