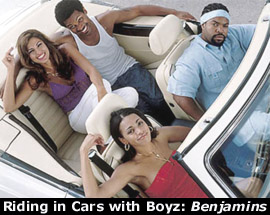 by Walter Chaw Blaxploitation without the sex, All About the Benjamins is a gratuitously violent film laudably free of the pretense of political correctness, but it's so calamitously loud and arbitrary (and has a character who fits the same description) that it fritters away almost as much good will as it earns. The only things separating All About the Benjamins from other whip-edited, hard-action movies are Ice Cube's joyfully offensive screenplay (co-written with Ronald Lang) and an opening set in a Confederate's dream of a trailer park that does more for exploding the race issue in these United States than the past five Denzel Washington pulpits.

Bucum (Ice Cube) is a bounty hunter on the trail of small-time conman Reggie Wright (Michael Epps). While chasing him one day in a sun-bleached Miami (All About the Benjamins plays almost precisely like a ghettoized Carl Hiaasen novel), Bucum and Reggie stumble upon a eurotrash diamond heist, form an unlikely partnership, and pursue "the Benjamins" (referring to Ben Franklin's appearance on the hundred dollar bill) in the form of a lot of hot rocks and a winning lotto ticket. They also take time to sadistically torture a bad guy in a way that is both disgusting and comes perilously close to shifting audience sympathies.

Though it's probably beside the point, All About the Benjamins suffers, too, from continuity errors glaring enough that they completely distract us from the story. The worst occurs when our heroes narrowly avoid getting blasted by an RPG, screech to a halt, drop a couple of wisecracks, and completely forget (as does first-time director Kevin Bray) about the assailant. Probably best to keep better track of a man wielding a rocket launcher.

For as tired as I am of the buddy picture and its stunningly banal permutation rainbow, I'm even more tired of the kind of jive-talking speed-rap school of blue African-American comedy represented by Epps (see also: Chris Tucker and Eddie Griffin). There's no question that he scores once or twice, but it's telling that his funniest moment comes when he falls about ten feet onto his head. Perhaps sensing the role that irritation plays in this kind of humour, Cube's Bucum is repeatedly punishing Reggie with various physical mortifications and other sundry humiliations. It's a latter day Laurel and Hardy, essentially, with the rail-thin Epps playing foil to the ever-abusive Cube--and while I realize that a rather large urban following exists for such a performance, there's a limit to every fad and mine has been reached with this one.

Embedded in All About the Benjamins is the sticky idea that money, however ill-gained, results in a certain level of patriarchal credibility for African-Americans. A lesson learned once at the foot of O.J. Simpson, now presented in fanciful ultra-violent fashion by a neo-Blaxploitation picture so self-conscious that its foxy brown mama is named Pam (Valarie Rae Miller). With a fantastic prologue, a muscular performance by Ice Cube, and a handful of comic moments, All About the Benjamins admittedly offers something for the action movie cultist (or genre historian), but Epps is exhausting enough to balance out most of the good. He's just that irritating. Originally published: March 8, 2002.