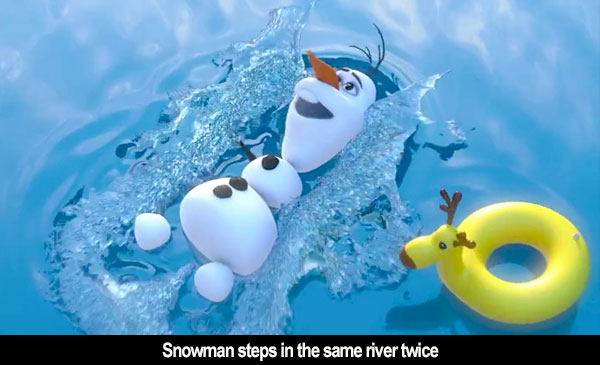 THE WIND RISES
****/****
written and directed by Hayao Miyazaki

Editor's Note: This review pertains to the original Japanese-language version of The Wind Rises.

by Walter Chaw Hayao Miyazaki's alleged swan song The Wind Rises is mature, romantic, grand storytelling that just happens to be something like a romanticized biography of Jiro Horikoshi, the aeronautical engineer behind the design of the Mitsubishi A5M, which led, ultimately, to the Zero. Indeed, for a Western audience, watching Jiro's dreams of squadrons of Zeros buzzing over fields of green is chilling, and advance critics seemed unable to distinguish the Japanese war machine from the film's focus on a life lived in pursuit of dreams. In truth, separating these two aspects of the picture--the proximate and the historical--is self-defeating. (Dismissing the movie out of hand is equally blinkered.) One without the other, The Wind Rises loses anything like substance, resonance, importance. It would fall on the one side into gauzy bullshit, on the other into Triumph of the Will. As is, it's something more akin to Studio Ghibli's own Grave of the Fireflies in its humanizing of a man whose dreams were corrupted into something terrible. Einstein would be one of the West's potential Horikoshi corollaries--and if Miyazaki had done Albert's biography, I'd expect to see mushroom clouds illustrating his fantasies of relativity. For Horikoshi, Miyazaki provides upheavals and disasters as highlight to each of his life events: He first meets his wife in a train crash; in a lilting epilogue, when Jiro bids farewell to his dead wife, Miyazaki offers fields of devastation and a village in flames. Throughout, Miyazaki presents earthquakes, rainstorms, sudden bursts of wind as reminders of...what? The inevitability of change? The portents of war? The cycles of life and death? All of that; but what compels is the idea of helplessness in the face of larger forces--that although we chase our dreams, we're never really in control of our destinies.

As a last film, The Wind Rises is wonderfully ambiguous. Its wisdom derives from an acceptance that the world co-opts what you produce; that you lose control of your ideas once you set them free; that at the end of it, the only thing you can claim is that you loved well and truly. Far from resignation, it feels like the fruit of real experience, imparted with absolute humility and grace. The Wind Rises is, after all, a film about being on the wrong side of a conflagration. A late-night conversation as Jiro waits for a date with his bride-to-be ends with a mysterious stranger telling him that Japan will burn along with technological ally Germany--and we know that it does burn, not just in the infernos of Hiroshima and Nagasaki, but also in the devastation of Allied incendiary bombs dropped on a civilian population that had, for centuries, built their homes from paper and wood. It's a film that suggests the horror of knowledge that brings no profit to the wise. There's a line in Ride the High Country I absolutely adore, where aging marshall Joel McCrea paraphrases The Book of Luke, wearily, perfectly: "All I want is to enter my house justified." The Wind Rises is a declaration at the end of a legendary career that the creator is at peace to be singular from his creations, and that he's chased his bliss with passion and honour. For all the tragedies of the world and entropy, there is, at the end, that. It's enough.

Frozen is a reminder that Disney is mostly responsible for making animation a genre in the United States rather than a medium. Animated films here are "cartoons;" in Japan, they're farewells, love stories, abominations, dramas in several parts--the more agile because they're not bound to convention. They're not all winners, but they all have the potential to be. A massive sleeper hit, Frozen earns points for at least trying not to be such an asshole about women but loses points for being a not-very-good musical with a conclusion that seems to desperately want to toe the line between its usual Austen-ticity and a message of girl power, even while perhaps acknowledging criticism that most of their movies are resolved with murder. That doesn't stop Frozen, alas, from continuing with Disney's message that blonde is magic, brunette mundane; nor does it preclude their fixation with princesses and dead parents. Anyway, Anna (Kristen Bell) is lonely because her big sister Princess Elsa (Idina Menzel) doesn't talk to her, but Anna doesn't understand that Elsa is essentially Iceman in a dress and is afraid that she'll accidentally kill Anna if she interacts with her. There's a cotillion or something and some dubious suitors, and then enchanted snowman Olaf (Josh Gad) has a showstopping number where he talks about how much he'd like to experience warmth. Olaf is the best thing in a dedicatedly mediocre film with bad songs and flaccid pacing, though I also liked the canine-morphic reindeer lovable oaf Hans (Santino Fontana) makes talk (because I do that with my own dogs). And, yeah, I liked that the girls pretty much save themselves without male intervention and, for once, allow justice to be served without throwing someone off a cliff or knifing anybody. I liked Frozen all right, I guess. After I watch that snowman song again, I'll probably forget it completely.

Pretty sure the oaf was Krystof played by Jonathan Groff. Hans is Anna's suitor. What? I have a 3 year old.