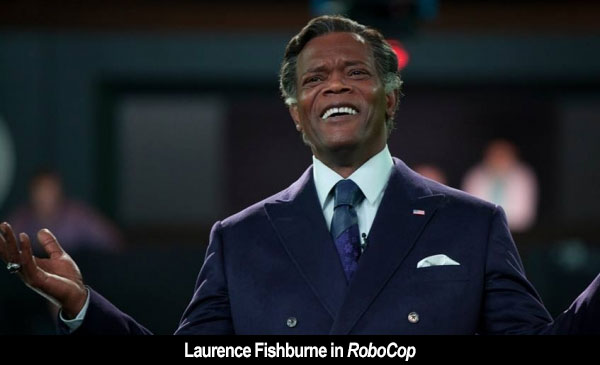 by Walter Chaw There's a scene at the end of José Padilha's RoboCop reboot where nearly-widowed Clara Murphy (Abbie Cornish), nervous about being reunited with her nearly-murdered husband, Det. Alex Murphy (Joel Kinnaman), takes care to put on makeup and something nice. (For me, Cornish trying to get prettier is like a tree trying to get tree-ier.) Padilha lingering here tells me a lot about both him and a film that doesn't touch the Verhoeven original, of course (few movies could, just in terms of sheer force of personality), but does care about developing its relationships, if not necessarily its characters. It reminded me of the kind of helpless love I feel when my wife tries to dress it up for me--I mean, honey, you don't have to do that. It's human, in other words, and if the franchise--a subgenre of machine/man existentialism--is about anything, it's about the difference between the little moments that make us human and all the other ones that align us more closely with machines. You could go deeper and describe it as an Apollonian/Dionysian thing--a mind/body dichotomy, the marriage of Heaven and Hell and on and on; or you could simply look at RoboCop as a pretty good action flick with lots of PG-13 fatalities that features more than its share of good actors in supporting roles as familiar action-movie staples. It's clear after the half-way point that that's what it's really aspiring to be. Either way, it manages a few times to make a case for this mythos to be, like Invasion of the Body Snatchers, one of those things each generation should consider adapting to their particular dysfunctions. It's no satirical masterpiece, no Grand Guignol exercise, but as slight entertainment, there's some meat on the bone.

Here as in the original, Murphy is almost killed, his mind and what's left of his body acquired by tech company OmniCorp for the purposes of creating a profitable cyborg crimefighter. The remake shifts gears with a muscular opening that recalls the dystopia of District 9--and the frustrated injustice of it, too--in which Glenn Beck-ian TV host Pat Novak (Samuel L. Jackson) reports on a global military drone force deployed to pacify Tehran. Another critical departure finds industrialist Sellars (Michael Keaton) realizing the essential danger of introducing a truly honest cop into the middle of institutions traditionally reliant on corruption (not just the police force, but the United States Senate as well). Directed by the guy behind epileptic trigger Elite Squad and its sequel, the action sequences are frenetic and hard-to-follow, though they're plentiful and do deliver the epic RoboCop vs. ED-309 battle promised in too many under-budgeted sequels and spin-offs, never executed to quite this level of excess. What's best about RoboCop isn't the too-stoic Kinnaman (Peter Weller's definitive RoboCop is one of the great underestimated performances of the '80s), whose Murphy is freed of the martyr's aspect with a mundane assassination attempt, but instead Cornish and Jackie Earl Haley. The former's long-suffering wife is made to make impossible decisions, then assume the role of humanist in the midst of so much corporate intrigue (better than Gary Oldman does as the scientist with a heart), while Haley's oily robot handler doesn't ever seem to think it's a good idea to introduce biology into machinery.

Consider a moment, though, where RoboCop complicates that question with a double-amputee holding and playing a classical guitar. It's executed perfectly, really, with the revelation that elevations in the subject's brain's pleasure centre interferes with the technology's performance. "But, I need emotion to play," he says. It's an interesting seed. There are other interesting seeds, such as the film's depiction of instant news, punditry, Second Amendment wackadoos, exploitation of Chinese workers, oppression of Middle Eastern states, creation of terrorist events, even the death of the middle class and the rise of the surveillance state. It has RoboCop capable of accessing all the CCV in the city in search of villains and their associates, and he undergoes a procedure that renders his actions under fire wholly automated rather than governed by human empathy and hesitation. Sadly, not a one of those seeds is paid off in what feels by the end not like subtlety, but like a sop to the middlebrow. The picture's soft enough in its politics that the rah-rah patriotism of talking-head Novak at the end loses its satirical lustre, despite Jackson dropping one of his patented "motherfucker"s. There's more satire, ultimately, in the opening-credits sequence of "The Colbert Report". But while RoboCop flirts with being superfluous, as it is, it's a just-fine addition to the mythology, and worth it even if it only inspires a revisit, or a first visit, to Verhoeven's hilarious, pointed, still savage and lawless original.