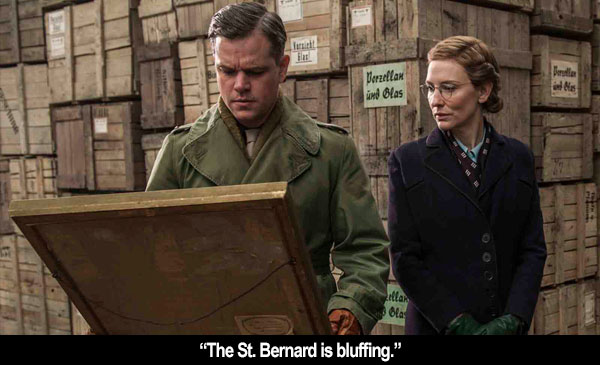 by Angelo Muredda There have been far worse prestige films than George Clooney's delayed Oscar season also-ran The Monuments Men, but there's rarely been a more misguided one. Hinging on a conceit that even the filmmaker appears to realize is weak sauce and based on a true story that's probably worth its weight in magazine articles that really make you think, the film follows the exploits of a team of ragtag art dealers and curators turned Allied troops, sent into Europe in the closing days of WWII to save the Western world's finest paintings, sculptures, and, yes, monuments, before Hitler could destroy them. It's perhaps a mild credit to Clooney the humanitarian that the overwhelming gaucheness of the premise--that European art is the thing most worth preserving amidst a war that saw the systematic genocide of 6 million Jews--rates not just a mention but a guilty structural response, too, in the form of a framing story that sees Clooney the actor, as team leader Stokes, lecturing his overseers on the ambiguous value of the mission. It's also to his shame as a screenwriter (alongside usual partner Grant Heslov) that the response is so ill-considered--the same canned "Art is all of us" spiel politicians who couldn't give a damn about art give in the promotional material for government-funded cultural events.

Despite the straightaway nature of the genre--the caper with gravitas--one struggles with summarizing the narrative, an episodic plot doled out in halting steps via a series of treasure hunts that focus on pairs of indistinguishable characters who may as well go by their actors' names. Here, for example, are John Goodman and his French equivalent Jean Dujardin, an odd couple who find themselves avoiding machine gun fire from a kid while searching for something or other. There go Bill Murray and Bob Balaban, tracking down art plundered by an SS officer in occupied Paris, whose post-liberation dash has left Louvre curator Cate Blanchett in the lurch and in the hands of Monument Man Matt Damon. There's Hugh Bonneville, the lone-wolf recovering drunk in search of redemption via the securement of Michelangelo's Madonna and Child. So undefined and eccentricity-free are these men and women that their pre-film status as art historian and university lecturers is implausible, even unthinkable: When Blanchett's curator offers Damon the mother lode of archival keys, a little journal with index numbers matched to stolen artifacts, he seems surprised by the very idea of librarianship. This despite its obvious importance to his own profession, as the medieval curator for the Met.

Though Clooney mostly wastes the cast in these high-toned riffs on Police Academy (Murray especially is in catatonic mode, as in junk like Passion Play putting in an appearance for a friend instead of giving an actual performance), you can't say he doesn't try his hand at filmmaking proper. For such a square, old-timey exercise in patriotism and sloganeering for the triumphal power of art, this is a surprisingly angular affair, chopped up and sequenced like a postmodern text at times. Consider the sequence where one of our old boys meets his maker, which starts off in the present then segues without notice into a disembodied voiceover from the future, the deceased's last letter narrating his own offscreen death. While it's good that Clooney is willing to take such chances, it would be nice if he showed a better command of his form in the process. There's no real justification for why this character is suddenly granted a voiceover beyond the obvious (to surprise us when we learn it's his valedictory address), hence no real justification for the structural hiccup, which consequently doesn't leave so much as a mark on us. Another death that is clearly supposed to play more straightforwardly is presented with all the clarity of one of the cubist portraits the men are trying to rescue, with bodies racing through an incoherently-framed space amidst a firefight that has no further bearing on the story, apart from claiming our guy. The best way to think of these blips might be as a displaced trope from slasher movies--the closest Clooney will ever come to making a Final Destination sequel.

Perhaps it's unfair to expect high formalism of Clooney, who's not flexed these particular muscles since Confessions of a Dangerous Mind. But there's no excusing the film's dithering approach to history, nor to the titular squad's status therein. As a public figure who puts himself on the line for his political beliefs, Clooney's heart seems to be in the right place even when his patter is self-enchanted. Onscreen, and in a movie of his own devising, that tendency towards speechification is just obnoxious. Our tolerance for smugness and our stance on what we might call The Clooney Question is put to the test in a rigged game near the end of the film as Stokes monologues in the direction of an imprisoned former Dachau camp overseer, singing the praises of his favourite New York deli, where he eats bagels prepared by a guy named Sid. Surely we can't sympathize with the Nazi here, but what if we find Stokes's story condescending rather than affecting: white American guilt channelled through a blunt instrumentalization of a Jewish deli owner he sort of knows back home? What, for that matter, are we to think of banal assertions like those in Stokes's equally dog-whistling lecture about the relative importance of the men's work, in light of the obvious devastation of the Holocaust (which goes unnamed) and, deeper sob, the death of the aforementioned troops? If you raze a generation of people, he explains, their successors will eventually come back to replace them in full force--but, boy, if you take their art, "it's like they never existed." Is it worth it?, The Monuments Men keeps asking, and of course it is, it keeps answering, most dubiously in a ballsy coda that has Clooney's own father more or less insisting "Yes!" onscreen. Hey, as long as he's convinced.